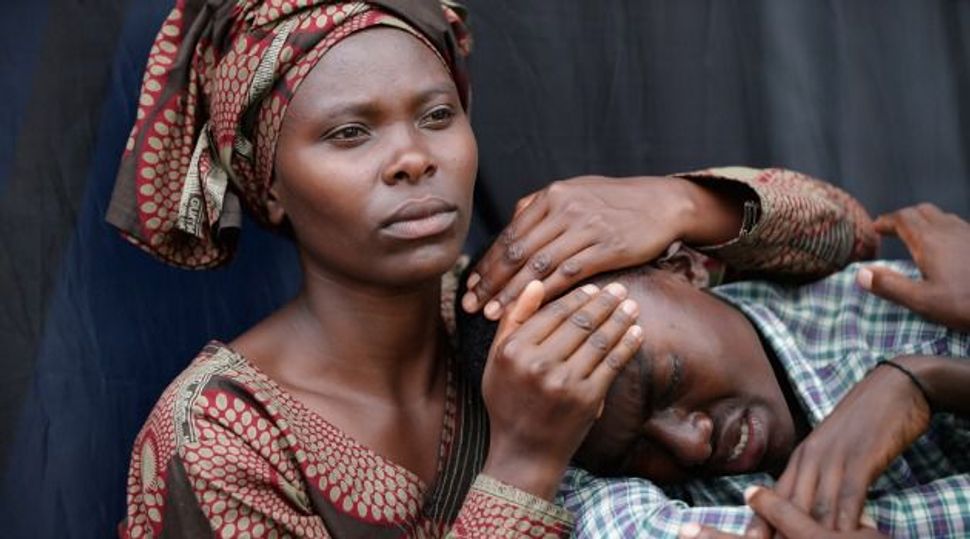 I am no Shmuley Boteach, God knows. But I have recently learned from the Forward that Boteach and I have one thing in common – we are both rabbis who have visited Rwanda.

This February, on the eve of Rwanda’s commemoration of the 20th anniversary of the Tutsi genocide, I joined a 10-day “witnessing” tour hosted by the Karuna Center for Peacebuilding. We heard stories of horror, and stories of heroism, rescue, reconciliation and – unimaginably, miraculously – stories of forgiveness.

While I am delighted to hear that the governments and entrepreneurs of Rwanda and Israel are now interested in one another, I find myself dreaming of a different sort of connection: What if the people of Israel and Palestine could learn from the Rwandan people how to do the difficult and necessary work of trauma healing and reconciliation?

The blossoming of Rwanda today defies facile explanation, just as it defies facile criticism. I went on this journey with the intention of not-knowing, of bearing witness without judgment. Throughout the ten days, Abraham Joshua Heschel’s expression “radical amazement” kept coming to mind – a theologian’s way of saying “mind-blowing.” How to process, for example, the experience of meeting 60+ convicted genocide perpetrators in matching blue outfits, dancing and singing joyfully to welcome you as they take a break from their community service work building homes for survivors?

A few weeks after returning home, an image came to me in a dream of healing a house on the inside and on the outside. This dream image captures the multi-level processes happening in Rwanda. You might say that the all-out, rapid government push to modernize – the spanking clean and high-tech image of the capital city Kigali, for example, with foreign business people staying at posh hotels – is the healing of the house on the outside. But the stories we heard – those are the stories of healing on the inside.

Trauma healing seems to be at the heart of the transformation happening in Rwanda, and it is relatively recent. Our hosts in one village spoke of the dawning realization that is beginning to bring peace to their hearts: that they have all been traumatized, that they have all been suffering. Utilizing decades of research and intervention by American psychologist Ervin Staub and others, the Rwandan people are learning concrete steps to heal their broken hearts and to accept the Other as human. It is a radical notion, and it is spreading.

Of course, reconciliation without justice would be a travesty. Rwanda’s community-based, all-volunteer judicial system, gacaca, did an astounding job of dealing justly with millions of genocidal perpetrators. Yet with a task so daunting, satisfactory closure remains an ongoing challenge.

I recall us sitting on a long wooden bench in a village clearing, listening (with the help of a translator) to six people sitting on the bench across from us. Two are Tutsi survivors, one is a Hutu perpetrator who served time in prison, one is a former member of a Hutu militia group, and two are young people representing the next generation. They are at the heart of a widening circle of “clubs” of reconciliation in their region, trained in trauma counseling and non-violent communication. They say that they now enjoy one another so much, they can’t wait for the weekly gatherings in which they together assist whoever needs help in the village.

One by one the six people on the bench tell us their stories, and then it happens: a gesture so subtle we almost miss it. The older woman survivor leans in to whisper something to the tall male perpetrator sitting next to her, and she drapes her arm over his shoulders. It is a moment of casual affection that speaks louder than all their prepared stories. We are awestruck.

The late philanthropist Anne Heyman successfully exported the “youth village” concept from post-Holocaust Israel to post-genocide Rwanda. Today, the Rwandan people have much to export to Israel/Palestine, and to the world – and I’m not talking about coffee and bananas. On the level of our shared humanity, we have much to learn from the ordinary people of Rwanda. If they can live literally next-door to former enemies, learning to co-exist and cooperate as neighbors – and in some cases even grow to love one another – then other people in less horrific conflict situations ought to be able to do at least as much. If the people of Rwanda can heal their broken hearts and accept the Other as human, so can we.