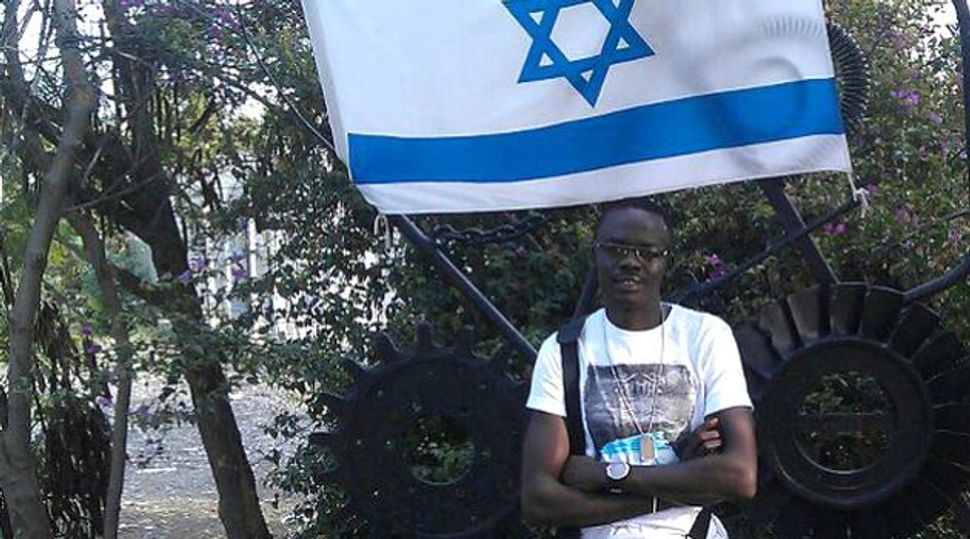 In the fall of 2010, I had recently arrived in Tel Aviv and had started my New Israel Fund Fellowship at ASSAF, a humanitarian aid organization helping asylum seekers and refugees in Israel. I met Guy around then at the ASSAF offices. He spoke English, so I explained to him that I was researching the refugee community. He quickly agreed to advise me, help me meet community leaders and translate interviews.

One evening we walked around south Tel Aviv together, discussing his future goals and desire to go to college and help his people. We entered an ad-hoc shelter where at least 100 Sudanese men slept each night. The shelter was the basement of a building that the Sudanese community had rented out. Guy and I sat there for hours, conducting a group interview with around 10 men. Guy translated for me with astounding patience and care. From the beginning, it was obvious to me that he was dedicated to helping his people.

Guy was an asylum seeker himself. During the genocide in Darfur, he fled while his village was burning down, ran for his life and left his family behind. Through a mix of luck, a friendly personality and survival skills, Guy made his way through Sudan and Egypt to Israel, where he felt he would be safe from harm. He arrived in Israel in 2008.

I stayed in Israel until December of 2011. Around that time, Guy reached out to me saying he was applying to colleges in the U.S. and asking for help. I decided to write him a recommendation letter, explaining that he had served as my translator and recounting Guy’s positive attitude and the dedication he had to his fellow Darfuris.

He was accepted to one school, the College of Lake County in Grayslake, Illinois. Someone in the admissions department had read his personal statement and had decided to take a chance. But he needed unofficial sponsors — U.S. citizens to vouch for him and tell the school they would support him financially if need be. I, along with two other people, agreed to it. We turned in our financial information to the school and they issued him a form he could use when requesting a visa, proving he had been accepted and that he had the funding he needed to attend.

I first started fundraising before Guy had a visa to come to the U.S. I managed to raise just enough for a one-way ticket from Israel by hosting a Legendary Bingo fundraiser led by a hilarious drag queen, to which only about 15 people showed up.

When I got the email that Guy had obtained a student visa from the U.S. Embassy in Israel, I was surprised. It’s literally a miracle, I told my family and friends. There was just no other explanation (and still isn’t to this day). Anna Rose Siegel, another friend of ours living in Israel at the time, helped Guy purchase his flight and I sent over the money. I knew I still would have to fundraise until Guy completed his studies because he would not be legally permitted to work in the U.S. on his student visa.

Guy is a friendly and resourceful person. The same way he reached out to me for help, he reached out to the one person he knew in Chicago — Tamar Shertok, another young Jewish American who had spent some time with asylum seekers in Tel Aviv.

Tamar wrote me that she wanted to help fundraise and together Tamar and I raised enough money to get Guy through two semesters of college. We had to cover everything — his housing, tuition, healthcare, phone, transportation, food and more.

Tamar reached out to Naomi Eisenberger, the Executive Director of the Good People Fund, and she agreed to help. The Good People Fund provides financial support, guidance, and mentoring to “charitable activities of modest proportions that are undertaken by Good People acting singly or in small groups.” They have been covering more than half of Guy’s tuition costs since his first semester. They also bought him a brand new computer when the used one he had broke.

Asked why she decided to help us help Guy, Naomi said she had been impressed by Guy’s story and his reputation in the refugee-directed NGO world. She added:

We were equally impressed with the actions of Maya Paley and Tamar Shertok who had agreed to “shepherd” Guy’s journey to the U.S. and a college career. Who would take on this extraordinary responsibility? As long as there were others who could help, we knew that our donors would be honored to be a part of this special mitzvah.

The Good People Fund believed in us and in what we had taken on and felt us worthy of their support.

But this past semester has been difficult. There were times when we did not know if we would be able to pay Guy’s rent the next month, let alone his tuition and books for school. And almost all of our personal networks have been tapped out for donations. Luckily, Alix Sherman, a psychotherapist in Chicago, stepped in to help out. She and her family took Guy in for part of the summer and have treated him like their own son. Alix’s son, a 13-year-old, even held a concert with his band and raised $3000 in one night.

To help support Guy’s education, you can visit his website.