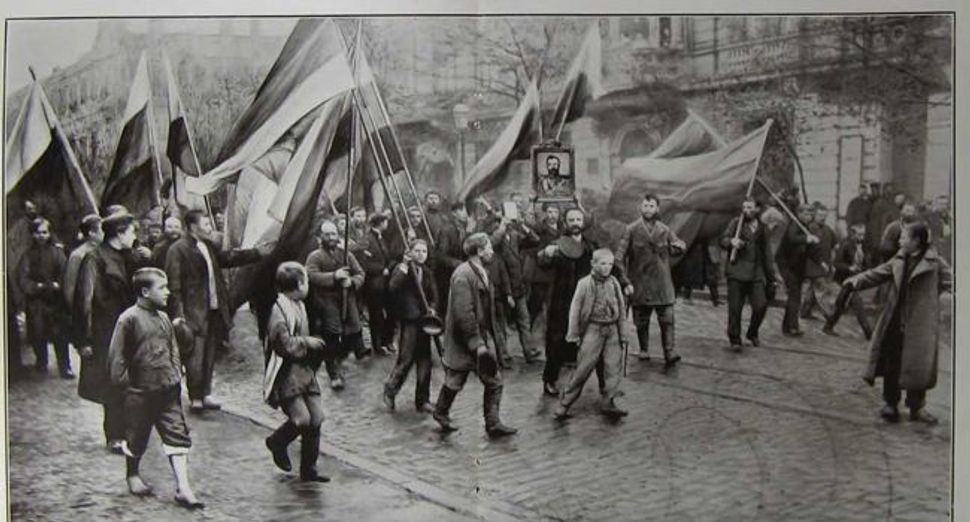 Ignominious Return: The ultra-nationalist, anti-Semitic Black Hundreds, here marching in Odessa in 1905, are back again. Image by Wikimedia Commons

The world has roared with indignation at the anti-Semitic flyers distributed by masked-men outside a synagogue in Donetsk, in Eastern Ukraine. The flyers ordered local Jews to register with the separatist Donetsk People’s Republic, in light of the fact that Jewish leaders in Kiev supported the Ukrainian “junta”. Since the Donetsk People’s Republic controls all of two government buildings that were seized by pro-Russian forces a week earlier, the flyers were mainly an act of political theatre. The intent was to frighten and intimidate Jews, not to register them. And perhaps to spark anti-Semitic sentiments among other local inhabitants.

The authorship of the flyers is hotly disputed. Denis Pushilin, the head of the People’s Republic whose name appears on the flyers, as the person ordering the registration, has repeatedly denied issuing them. He claims the flyers were a provocation by Ukrainian fascists, in order to discredit the pro-Russian movement. Ukrainian Prime Minister Arseny Yatseniuk has condemned the flyers, as has the right wing Ukrainian party “Svoboda” — a first, since “Svoboda” has a long history of anti-Semitism. The Ukrainians contend that the flyers are what they appear to be, the work of Russian separatists. There is no hard evidence either way, so the public is confused. A heinous act was perpetrated, but by whom?

With all the focus on the Donetsk incident, the conversation has missed the forest while being distracted by a single tree. During the past month, since the annexation of Crimea, the Kremlin has shifted its rhetoric and tactics in playing the “Jewish card.” It has embraced the language of classical Russian nationalism, going back to tsarist times, and has engaged the dark forces of the Russian ultra-right. That includes using anti-Semitism as an ingredient in the anti-Ukrainian campaign.

In a nutshell: the Kremlin’s attempt, back in late February and March, to paint the new Ukrainian regime as Nazi and anti-Semitic has failed. It didn’t pick up much traction in world public opinion. So now the Kremlin is spreading the line that the Ukrainian leaders are Jews. Or at the very least, servants and lackeys of Jews. The intended audience is no longer international; it is domestic.

It all started with a Russian television “documentary” on former Ukrainian President Yulia Tymoshenko, aired on March 30. The film was a propaganda piece in the Soviet style – unrelenting character assassination with ominous, grating background music. Tymoshenko’s whole career, the narrator intoned, was one of embezzlement, criminality, back-stabbing of associates, and secretly ordering assaults and killings. Then, toward the end, the culminating “disclosure”: Tymoshenko was Jewish. “She completely hides her origin. But for many, it is no secret that the father of this woman with a hair-braid — Viktor Abramovich Kapitelman — has Jewish roots.”

The implication was that now, in light of that fact, her pattern of lies, theft and murder all made sense.

A few days earlier, the same documentary news program did a similar hatchet-job on Ukrainian Prime Minister Yatseniuk, and indulged in the rhetoric of the 1970s: Yatseniuk was not just a Jew, but a Zionist. “One must take into consideration his Jewish origin. He is a Jew on his mother’s side, and is one of the fifty most famous Zionists in Ukraine.” No wonder he was an enemy of Russia.

For the conventional (non-anti-Semitic) Russian viewer, these disclosures of Jewishness were insignificant — after all, they lasted only 20 seconds in a half-hour program. Or they could be brushed aside as editorial lapses into bad taste. But for the Russian ultra-right, these words were gold. They legitimized their wedding of anti-Ukrainianism to anti-Semitism.

The documentary’s line was picked up instantaneously in a pro-Russian separatist demonstration in Lugansk, Eastern Ukraine. An unidentified speaker went straight for the jugular: “The Maidanists say we’ve had a revolution of national liberation. And I ask: ‘which nation?’ Let’s see how many Ukrainians have come to power. Yatseniuk?” The speaker paused, and the crowd called out, “He’s a Jew!” The speaker continued to list major Ukrainian politicians, adding their alleged Jewish names to prove their true origin: “What about Klitchko-Ettinson, or Yulia Kapitelman?” Someone from the audience yelled “She’s a zhid!” “Or the great fighter for the purity of the nation Tyahnybok-Srokman? Is this the bright light of the Ukrainian nation? This is a coup, a coup perpetrated by Zionists.” The crowd burst into applause.

A mix of various types of Russians have entered Eastern Ukraine over the last month: specials forces, intelligence agents, and all kinds of political agitators and provocateurs. From a Jewish perspective, the most important Russian group now active in Ukraine is the Black Hundreds. This movement sees itself as the reincarnation of the notorious anti-Semitic organization that flourished in Russia more than a century ago. Their program consists of the restoration of the Russian Empire in its pre-1917 borders (including Ukraine); establishing Russia as a mono-ethnic state and renewing the unity between the state and the Russian Orthodox church, as in Tsarist times; and protecting Russia against “those who hate Christ.” Their literature openly attacks “zhids.” (Here’s a recent post on their web-site: “The Vice President of the United States praised Jews for controlling the media, and thanked them for their central role in the legalization of gay marriage.”)

The Black Hundreds (and other similar groups, of which there are many) do not recognize the existence of a Ukrainian nation. There is only one Russian, or Slavic, nation. Ukrainians are “Little Russians.” As one militant occupying the government building in the East Ukrainian town of Slavyansk put it: “There is no Ukrainian people, there is just one Slavic people. Or there was, until Jews like Trotsky divided us.” How’s that for a double whammy? Both Ukrainians and Jews are enemies of the great Russian people. In normal times, this would be the crackpot ideology of marginal groups, the equivalent of White supremacism in the United States. But these are not normal times. Putin has decided to wage his war on Ukraine with the help of paid volunteers from the Black Hundreds. The movement’s white, yellow, and black flag has been visible at pro-Russian, separatist rallies in Kharkov, Odessa and Donetsk (yes, Donetsk, with its flyers ordering Jews to register).

Until the recent disturbances in Eastern Ukraine, there was no Black Hundreds organization in Donetsk, Kharkov, or Odessa. Theirs is a stridently Russian ideology, and ethnic Ukrainians are the majority of the population in those provinces. But now, with the influx of people, money, and arms from Russia, the movement is active on the streets, and in the seized government buildings. At the end of March, a Black Hundreds activist from St. Petersburg was arrested in Odessa by the Ukrainian Security Service. Besides organizing marches, Anton Raevskii established a camp on the outskirts of town to train people in hand-to-hand combat. According to the authorities, he was calling on his trainees to attack a Ukrainian military station and Jews. Raevskii, whose arms are tattooed with Nazi slogans and insignia, was deported back to Russia.

Despite the ambivalence now expressed about the flyers in Donetsk, one fact is unequivocal: It is no coincidence that virtually all of the known anti-Semitic incidents since the fall of the Yanukovych regime have taken place in the Eastern part of the country — Crimea, Odessa, Donetsk, Nikolayev. It is the region where Russia exerts the greatest influence and interference, and it is there where a group thought relegated to the dustbin of history is now active again, thanks to Russia: the Black Hundreds.

David E. Fishman is a professor of Jewish history at the Jewish Theological Seminary, and director of its program in the former Soviet Union “Project Judaica.”