The Moral Quandary That Is Hamas 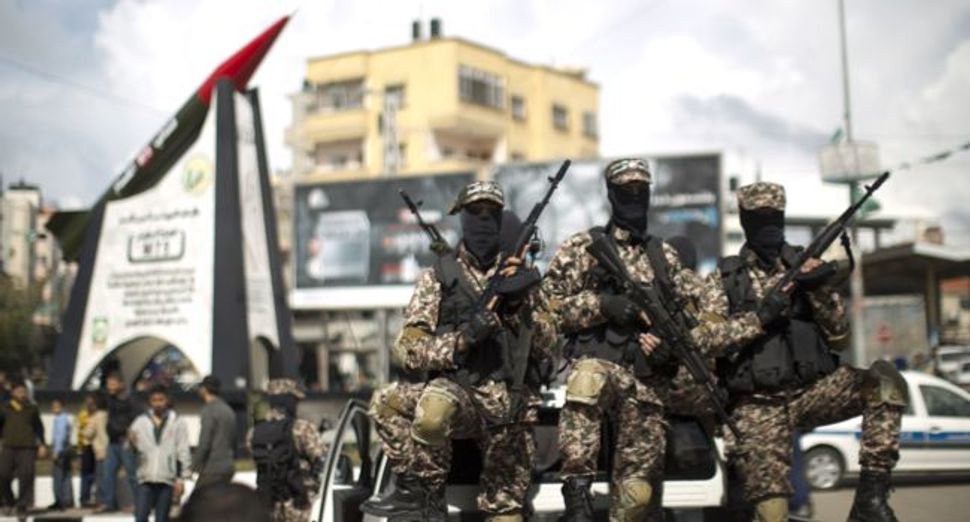 Unequivocally Bad Guys: Palestinian militants of the Ezzedine al-Qassam Brigades, Hamas’s armed wing, sit on a pick-up truck in front of a model of a Gaza Strip made M75 rocket newly displayed at the al-Jalaa square on March 10 in Gaza City Image by Getty Images

Before we can formulate a coherent opinion about Palestinian President Mahmoud Abbas’s decision to renege on commitments to both the Quartet and Israel and join forces with the still-unrepentant, bus-bombing, Kassam-lobbing, Holocaust-denying, expressly genocidal terror organization known as Hamas, or about the Israeli government’s decision to suspend peace negotiations as a result, or about the propriety of international pressure on Israel to keep negotiating despite it all, we first must say something about the Jewish soul.

In the heart of every modern self-aware Jew there lurk two different moral impulses — secular ideologies, really — which we always hope to God will never run into conflict with each other: the longing for peace, and the struggle against evil.

Both of these invoke heavy metaphysical categories and carry practical, political implications. Both are prescriptive and deeply caring about the fate of our world. Both are grounded in ancient traditions and enlist the Holocaust in their defense. Both entail a huge dose of compassion for the fate of innocent people. Both long for a better world in this lifetime.

But they are not the same. And right now, on the question of Hamas, we are being forced to choose.

The peaceable impulse attributes much of the world’s ills to intolerance, militarism, and the arrogant excesses of collective supremacy, nationalism, and muscular flag-waving that dehumanize the Other. It stands outside every conflict and says: Leave aside your passions, your irrationality, and the past, and come to the table so that the killing may stop. It points to the Holocaust and says: You see what happens when intolerance takes over? It says: negotiate, always, with anyone.

For such people the current thinking goes: Of course we are revolted by Hamas. But peace is made with enemies, not friends. Palestinian unification suggests an opportunity — to deal not just with half the Palestinians, but to cut a deal that can really bring peace. Hamas can be moderate, if they have no choice. Even if it’s a slim chance, isn’t it worth taking? Can we live with ourselves if we failed to grasp an opportunity for peace, no matter how improbable?

By contrast, the evil-fighting impulse attributes much of the world’s ills not to irrationality but to the native rapaciousness of mankind and the tendency of iniquity to make every play it can for power. Evil prospers, Burke taught, when good people refrain from fighting, and are taken in by the wiles of the wicked, who have no greater compunction about deception than about killing. The answer to evil is not reason but spirit — not conciliation but victory.

When it comes to negotiating with Hamas, evil-fighters cannot even understand the question. To recognize and to fight — is this not the cardinal lesson of the Holocaust? What is left for the Jew in this world if he becomes the enabler of radical evil — of the murder of his own? What can be more obvious than fighting terror without compromise, and not just any terror but the veritable inventor of the suicide bombing industry?

Now, I think it fair to admit that both the peace impulse and the evil-fighting impulse have blind spots. Peace-people risk being irresponsibly gullible. If you squint hard enough, Ismail Haniyeh can be made to look like Burl Ives, Nasrallah or Rouhani like rebbes from Riverdale. Evil-fighters, on the other hand, can fill themselves with so much righteous anger as to miss actual opportunities for resolution. And both suffer from the disadvantages of ideology: They fail to appreciate the secret and subtle cultural nuances that make people different from one another. True ideologues don’t bother learning languages.

Which is why the Bible also offers sobering stories about how both impulses sometimes need to be tempered by pragmatism to stay effective in our world. Naifs like King Hezekiah, who out of a spirit of peace gave the Babylonians a tour of top-secret facilities, only to encourage the war that brought Judea’s ruin, need to be told when their partners are taking them for a ride. Zealots like King Josiah, the great reformer who died on the battlefield confronting an Egyptian army that had declared its intentions merely to pass through, sometimes need to be told that martyrdom is not really superior to staying alive.

Which kind of pragmatism do we need to save us now?

It seems undeniable that today we run a far greater risk of being Hezekiah than Josiah — of falling down the rabbit hole of the blindness-inducing peace-pill. The Middle East has been especially unkind to the peace-pushers in recent years. Over and again, the actions of regimes — Palestinian, Syrian, Iranian — have failed to substantiate the hope that if you just talk long enough, and give leaders the benefit of the doubt, things really might work out this time around.

Iran was economically on the ropes because of Western sanctions, its only hope to leverage its way to power was through its nuclear weapons program. The stratagem worked: The West lifted sanctions partially on condition of only a freeze in uranium enrichment, and now their economy is getting back on track without having given up anything.

The Assad regime was struggling to stay afloat against rebels on multiple fronts when a combination of Russian chess-playing and American improvisation led to the current deal in which Assad fails to fully dismantle its chemical weapons in exchange for America not attacking.

Hamas, too, has been at its low-point since taking over the Gaza Strip, with Iran limiting its financial support, Egypt plugging up thousands of terror tunnels, and the return of Muhammad Dahlan to the public eye suggesting actual alternatives to their rule for the first time in a decade. Suddenly, Abbas has extended a lifeline to this group without extracting a single verified change in their horrific, rejectionist, genocidal character — and the West has shouted bravo.

Israel has suspended negotiations — leaving the door open just in case something really does change in Hamas — and has been given mixed signals by the West at best. Meanwhile the Palestinians have chosen terror, rejectionism, and unilateralism, violating not only of the terms of talks, but of the Oslo framework itself. Israel has negotiated in good faith, while the Palestinians have violated every commitment.

You cannot empower hate and expect peace. There can be no reconciliation with an unchanged Hamas. If the talks before seemed to take place on shifting sands, today we are in a sink hole a mile deep. And Abbas has put us there, knowing he holds all the keys to the entire industry of loathing and violence that fuels the conflict.

The moment is a test not just for Israel, but for all nations. Will we sit back, again, and allow radical evil to assert itself in our world?

David Hazony is is the editor of The Tower Magazine and is a contributing editor to the Forward.

The Moral Quandary That Is Hamas