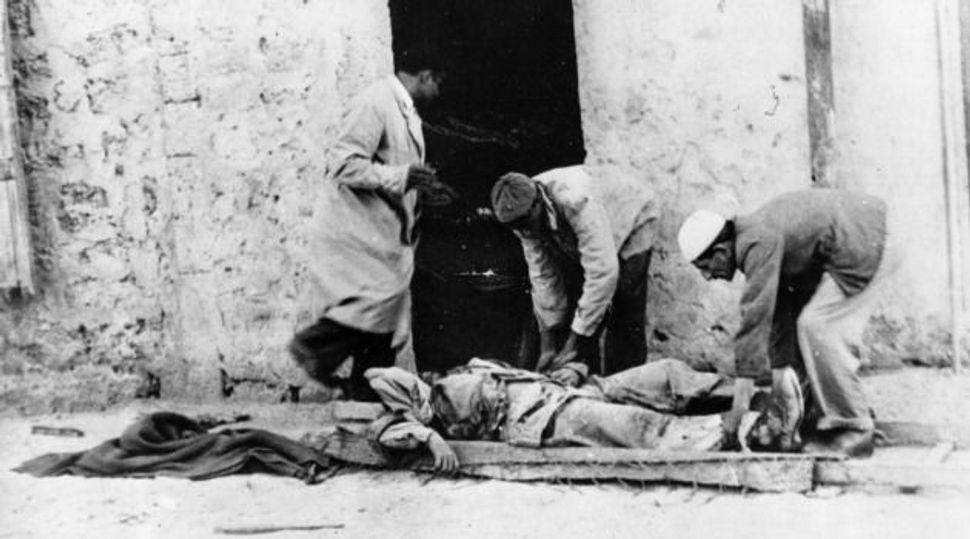 The answer can be found in a Facebook “look back” movie promoted ahead of Israeli Independence Day and made by Todd Zeff of Jerusalem U, an institution that uses film to strengthen young Jews’ connection to Israel.

Or, I should say, an answer. If only that answer weren’t so incomplete.

In the video, we see Israel “join” Facebook in 1948, followed by “first moments” that anachronistically include young pioneers farming the land (1938) and a Hagana Ship bringing immigrants to British Mandatory Palestine (1942).

We’re then treated to Israel’s “most liked posts,” ranging from Herzl’s “If you will it, it is no dream” to David Ben-Gurion’s “We extend the hand of peace and good-neighborliness to all the states around us.”

Israel’s photos include a lot of grainy black-and-white nostalgia shots. Then, in color, we see an Ethiopian kid with Israeli flags and a family of smiling white Jewish immigrants fresh off an El-Al plane.

But what don’t we see in this video?

Well, here’s one status that seems to have been left out:

“We came here to a country that was populated by Arabs and we are building here a Hebrew, a Jewish state; instead of the Arab villages, Jewish villages were established. You even do not know the names of the villages, and I do not blame you, because these villages no longer exist. There is not a single Jewish settlement that was not established in the place of a former Arab village.” — Moshe Dayan, former Israeli Defense Minister

Or how about these statuses?

“We must use terror, assassination, intimidation, land confiscation, and the cutting of all social services to rid the Galilee of its Arab population.” — Israel Koenig, former Interior Ministry official, in the leaked Koenig Memorandum

“When we have settled the land, all the Arabs will be able to do about it will be to scurry around like drugged cockroaches in a bottle.” — Raphael Eitan, former IDF Chief of Staff

”The Palestinians are like crocodiles; the more you give them meat, they want more.” — Ehud Barak, former Israeli PM

Or how about this gem?

“Goyim were born only to serve us. Without that, they have no place in the world – only to serve the People of Israel.” — Rabbi Ovadia Yosef, former Israeli Sephardic Chief Rabbi

As far as Israel’s grainy black-and-white photos, I wonder why we don’t see this image of Palestinians recovering their dead in Jaffa before the exodus of thousands of Arabs from the new state of Israel in 1948?

Or, as we move into color photography, how about this picture of a Palestinian girl standing on a makeshift bed in the cave that hosts her family since Israeli forces demolished their East Jerusalem house in 2013?

I realize that terrible quotations and horrifying images can be found on both sides of the Israeli-Palestinian conflict, and my goal here isn’t to take cheap shots or to gratuitously flaunt Israel’s dirty laundry.

But videos like the one above, which are popular especially around Israeli Independence Day, tell an extremely narrow story about the founding of the state of Israel and the reality of that state today. It’s an account that celebrates the creation of Israel, but fails to take stock of the Palestinian losses — in both life and land — that made that creation possible.

You might say it’s expecting too much to ask that a feel-good video like this one, clearly designed to encourage Jews to celebrate Israel, include some acknowledgement of the Palestinian narrative. I disagree. Leaving that side of the story out of our narrative actually makes it harder to celebrate the positive aspects of Israel, because it feels like we’re celebrating a fake PR version of the country, one that doesn’t really exist.

This movie claims to provide a “look back” at Israel, but it’s a disingenuous look, with a hand held over one eye so that half the perspective is blurred out. It’s enough to make me wish Israel really did have a Facebook profile, so that Facebook’s algorithms — free of human bias — could generate a movie that would show us the full story of Israel. It might be harder to watch, but for critical thinkers, it would actually be easier to celebrate.