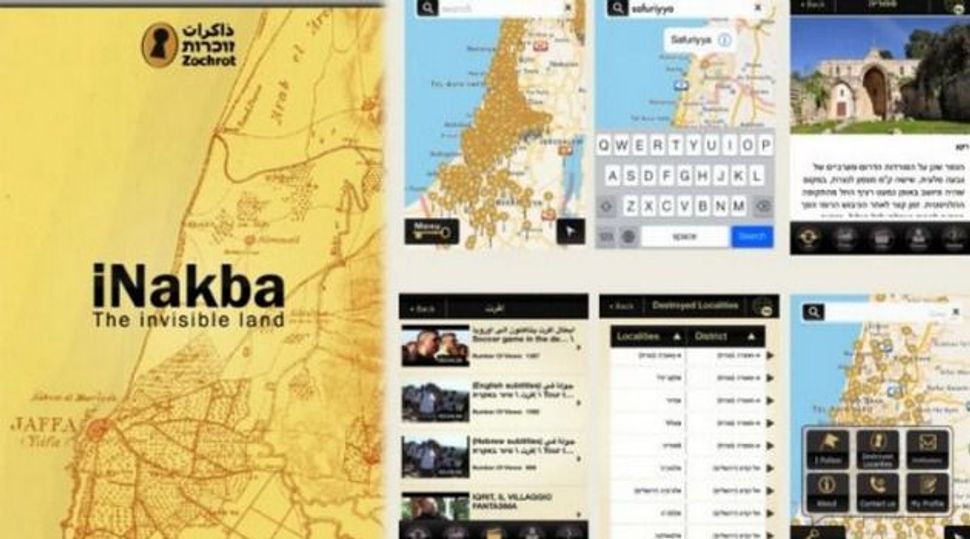 Views of the iNakba app / Zochrot

What would be a reasonable response to this week’s release of the interactive iNakba app, designed to help users “locate the Palestinian localities destroyed in the Nakba since 1948 and to learn about them”?

Given the depth of ignorance surrounding the topic, you could greet iNakba as an essential corrective; given the ongoing pain within the Palestinian community, you could consider how it might serve as a conduit for healing. You could even – reasonably – raise questions about the limits inherent to crowdsourcing as a tool in the study of history.

Or you could scoff. That’s the route that Tablet writer Liel Leibovitz chose:

It’s easy to dismiss the app as a gimmick — the name itself begs it. It’s easier still to argue, correctly, that reducing any cataclysmic event to dots on a map is trivializing, and that an app, for all of its cool factor, is hardly the most suitable canvas on which to paint a historical picture that is infinitely complex.

Having dismissed the mapping of all-but-lost Palestinian history as a gimmick, Leibovitz then takes off on a flight of fancy, philosophizing about “what land means” and how iNakba is

all about roots and branches, however virtual. It is not interested in sweeping themes and movements of armies and causes and consequences; its focus are the homes and the yards and the smell of the grass of individual places long gone.

I would firstly submit that only someone who hasn’t had their own home taken can regard its mapping as a gimmick; furthermore, only someone whose side has already won has the psychic luxury of waxing philosophical about land as “first and foremost, an idea” in the minds of the pioneers.

While there’s no denying the dreamlike, mystical attachment of many Jews to the mere idea of Eretz Zion, an attachment born in centuries of longing and (I would argue) still animating much of the Diasporic discourse surrounding Israeli politics, that attachment floats above something quite tangible: actual land.

Zionism is a modern nationalist movement, conceived (like all nationalism) in the 19th century and based in the Jewish people’s shared language, culture and land – not in a messianic sense, not in a romantic sense, but in an actual, physical, “no, we can’t build our nation in Uganda because that’s the wrong land” sense. Did the Jews, having long been off their land, have some pretty fantastical notions about what that land looked like and how it would behave? You betcha. But the early Zionists’ efforts were directed toward actual dirt between actual toes. There’s a reason that the (yes, romantic) ideal was a strapping, sunburned farmer. The romance was anchored in the material world.

But beyond that, even if we want to engage in a salon discussion of “what land means,” that exercise doesn’t free anyone from the moral imperative of grappling with the actual, physical, blood-and-bone-and-dirt-and-doorway losses of the Palestinian people.

Israel has tried to reject this imperative. It’s really tried. From erasing villages so that villagers couldn’t return, to attempting to erase the very use of the word Nakba, just like every victor in every war before it, Israel has tried to reshape history in its own image – and the Palestinians have refused.

Mapping villages lost in the state’s early years is as simple as it is excruciatingly powerful. By affirming the Palestinian catastrophe, it reminds every Israeli that our independence was not wrested from “a land without a people for a people without a land” – it was wrested from other people. And they still have the keys.

Despite recent evidence that the effort may be futile, I remain a two-stater. Like most political positions, the idea of a two-state resolution has always been imperfect, but I believe it still holds the best potential for leading us toward both a measure of justice and a minimum of death. In this regard, while I think that the iNakba app can provide a vital service, I do disagree with Zochrot’s endorsement of what amounts to a one-state solution.

While I don’t believe that any side has a greater claim to the (very physical) land over which they’ve been fighting and dying, I do believe that both sides need to recognize each other’s claims – particularly the side in the position of power. My side. Israel. We need to acknowledge the cost that independence brought.

As uncomfortable as genuine mutual recognition may make us, the sheer dishonesty in willed ignorance is corrosive and poisonous. It’s what allows so many Palestinians to deny that firing rockets on civilian populations is a war crime, and so many Israelis to believe that their country’s actions are and have always been pure.

Can one little mobile app, developed by a tiny Israeli NGO, representative of a fairly wee minority of Israeli citizens bring about comprehensive mutual recognition? Of course not. I rather doubt that Zochrot’s activists thought it would.

But because this mapping effort doesn’t cover the “infinitely complex” conflict in its entirety, nor address “sweeping themes and movements of armies and causes and consequences” – that is to say: because iNakba is only that which it claims to be – Leibovitz dismisses it out of hand. He suggests that just as Palestinians will have to continue to dream of their lost villages under any future peace plan, so too will Jews have to dream of Hebron, so really, everyone should just let it all go.

Here’s the difference: Jews can still find Hebron on a map. Palestinians have to plot coordinates and count stones.

Recovering a history that your enemy has tried desperately to hide is not a gimmick. It’s empowering. And that is why Israel has never liked it.