Supreme Court Got Politics of Prayer All Wrong 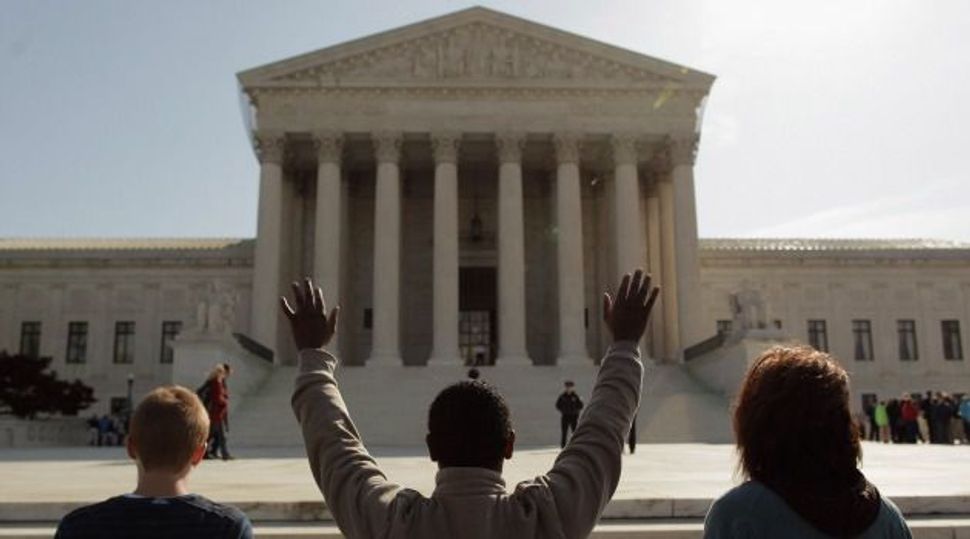 “For what we are about to receive, may the Lord make us truly thankful, amen.”

For ten years I attended a Church of England school and, for every set meal during that time, a version of this grace was said. Although there was a notable minority of Jewish boys and a growing population of Muslims at my school (founded in 1552, just after Henry VIII’s Dissolution of the Monasteries and establishment of the Anglican Church), there was no real doubt as to who the “Lord” was, no matter which one of the teachers was saying grace.

God bless Mr. Lomas who spelled it out: “… For Christ’s sake, amen.”

And that’s why this week’s ruling of the Supreme Court recognizing the right of American Town Meetings to “solemnize” their opening with prayer is so deeply disappointing. Instead of moving to undo the 1983 Marsh v. Chambers ruling that allowed prayer at government meetings it’s a step towards establishment of religion and an intrusion of majority beliefs into a supposedly independent sphere that honors minorities equally.

I believe that we should solemnize the eating of food. The fact that we can eat stuff that just grows from the ground still seems miraculous to me — whether a miracle of science or of divinity. And the fact that our political and economic system has seen fit to distribute enough food for me and my friends, colleagues and family to eat is also worthy of stock taking. But that still leaves us with a choice of how we do so and how we stuff that choice down each other’s throats.

It’s difficult not to see the incorporation of prayer as a political move. Though the Supreme Court is made up of 8 brilliant legal minds and Clarence Thomas — it understands that this is no theological debate, and that symbolic actions have de facto meaning. Allowing prayer to solemnize town meetings will mean that religious power will be in a position of sanctifying supposedly independent secular power. As Humpty Dumpty famously said:

“When I use a word… it means just what I choose it to mean — neither more nor less… The question is… which is to be master — that’s all.”

It’s a power move. We are gathered here to discuss town business and the symbolic power that invests it is from your Big Guy in the Sky. A Big Guy that you have made clear you think believes that women belong in childbirth, homosexuality is an abomination and Jews need to be converted. How does that make me feel when I’m arguing for equal pay for equal work, a Hanukkiah next to the town Christmas tree or a Gay Pride parade?

It doesn’t even matter that there will be towns with Jewish or Muslim majorities and that the local Christians might feel threatened. That doesn’t even it up, it just shows how flawed the decision is.

Many of my Jewish friends are atheists or agnostics (me, I haven’t decided). The idea of praying to a Big Guy in the Sky is offensive to them and they shouldn’t be forced to acknowledge that local government has anything to do with Him.

Most of my Jewish friends are feminists and the idea of a Big Guy (even if you can show me a Town Meeting that gives thanks to the Mother Goddess, I think we all know that the SCOTUS ruling is for a cis male God) to whom thanks can be rendered before deciding whether to cut the pay of (vastly predominantly female) kindergarten teachers, seems abhorrent.

And all of my Jewish friends believe in equality. So the idea of some sort of feudal religious hierarchy made explicit in a Lord who shines His favor down on those who agree with Him (again, I’m not talking theology, I’m talking the acceptability of de facto practice) at Town Meetings runs counter to the possibilities of equality opened by these United States when it declared against the established Anglican church.

I think Jefferson put it well. That, though we are created equal by a Creator, our governments are instituted among people and that their legitimacy comes from the governed not from the King or a Big Guy in the Sky. Can the majority of SCOTUS spell “inalienable?”

I’ll leave you with the Big Guy (Thomas Jefferson, not HaKodesh Baruch Hu).

“We hold these truths to be self-evident, that all men are created equal; that they are endowed by their Creator with inherent and inalienable rights; that among these, are life, liberty, and the pursuit of happiness; that to secure these rights, governments are instituted among men, deriving their just powers from the consent of the governed.”

Supreme Court Got Politics of Prayer All Wrong