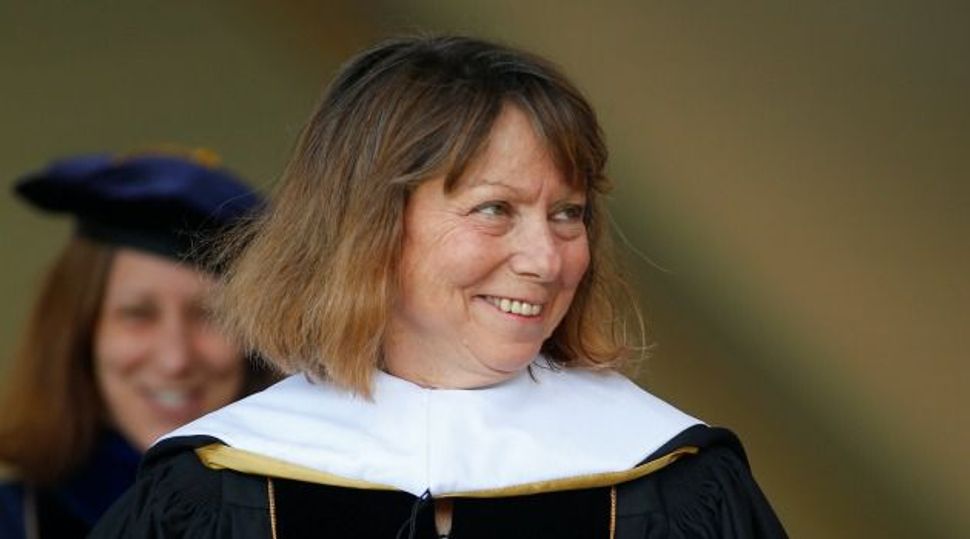 It even has a name now. Abramson-gate.

The abrupt firing of Jill Abramson as executive editor of The New York Times, and the unfolding public relations disaster for one of journalism’s premier brands is a story of unending fascination for media mavens and for those who like to see the mighty mess up. But Abramson-gate is also unalterably sad and – if there can be a silver lining here – instructive, not only to journalists but to the Jewish community.

Don’t treat women leaders unfairly. They will bite back.

One of the early narratives to emerge after Abramson was fired referenced her displeasure at learning that she, apparently, earned a lower salary than her male predecessor at the Times. Her boss, Publisher Arthur Sulzberger Jr., has disputed that allegation, though he hasn’t provided any numerical evidence one way or another.

The details aren’t important here. The backlash is.

This story line lit up the Internet because it resonated deeply with so many women in journalism who have faced the same inequity. And it’s something that readers of the Forward know is endemic in the Jewish communal world.

Just to recap: In our most recent, annual survey of the salaries of the largest Jewish federations, advocacy and service groups, and religious and educational institutions in America, women presidents and CEOs earned about 81 cents to every dollar earned by their male counterparts. And that was after taking into account the size of the organization they ran.

Trust us, more and more women will not stand for this anymore. Abramson-gate will mark a turning point.

Amanda Bennett, the first woman editor of The Philadelphia Inquirer, who was also fired after a relatively short tenure, wrote that the difference in public reaction between her departure in 2006 and now is both terrible and wonderful. “Terrible because, whatever the facts of Abramson’s departure, it exposed in a raw way the reservoirs of resentment, hurt and mistrust that women feel at work,” Bennett wrote in The Washington Post. “Wonderful, because it is clear that something fundamental has changed.”

Don’t underestimate the power of direct communication. It will save you lots of tsoris.

Even Sulzberger has acknowledged that he could have handled the brutal transition from one editor to another far more adroitly. His reluctance to speak openly and respectfully, and to anticipate public reaction, resulted in a painful dribble of statements and interviews as his side of the story slowly emerged after damage was done.

The lessons here are easily transferable to serious issues faced in the Jewish communal world.

Consider what may have happened if Richard Joel, president of Yeshiva University, had acknowledged the pain and struggles voiced by the dozens of men who contended that they were physically, sexually and emotionally abused at Y.U.’s high school for boys decades ago.

Instead, by hiding behind a curtain of silence, Joel ended up with a $680 million lawsuit against the university which, though it was later dismissed, contributed to the downgrade of Y.U.’s credit rating and distracted attention from the critical financial challenges facing modern Orthodoxy’s flagship educational institution.

Never mind the fact that Joel and Y.U. lost a unique opportunity to exert moral and compassionate leadership – and instead chose to be, as Rabbi Irwin Kula ruefully noted in the Forward, “just like everyone else.”

Don’t overlook the anxiety caused by disruption. It can make even smart leaders do silly things.

We’re not privy to any special insight into what happened at The Times last week, but it appears that the breaking point in the already rough Abramson-Sulzberger relationship occurred over the possible hiring of a senior editor to run the digital operation. Underneath the personal drama surely was the deeper professional anxiety of how a storied newspaper brand crafts a vital, sustainable future in the Internet age.

We know the feeling.

So should anyone leading a legacy Jewish institution. Simply raising enough money to keep operations going this year and next will not ensure the future. The federation system, the traditional advocacy organizations, synagogues and seminaries are all facing existential questions about their reasons-for-being in our rapidly changing Jewish landscape. Denying these fundamental challenges is definitely a losing proposition. But figuring out how to respond both urgently and wisely – well, that’s treacherous, too.

There’s a certain schadenfreude in watching the meltdown at The Times. But we might not want to gloat about their failings; we face similar challenges in our own world.