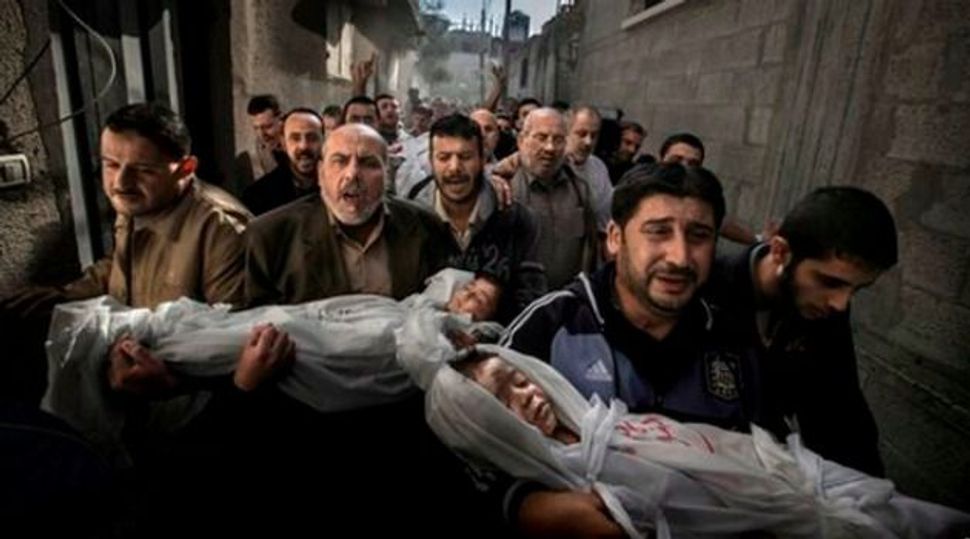 In college I had a Palestinian friend who, due to her ethnically ambiguous appearance, was often asked about her heritage. She would sometimes answer the invasive question by stating “I’m 95% Palestinian and I think about 5% squirrel or perhaps raccoon.” After hearing that line three or four times I decided to ask her why she kept using it. She responded: “Because, being Palestinian, I know that many people will never consider me fully human.”

I thought her line, albeit clever and poetic, was pure hyperbole. I didn’t fully grasp the extent to which Palestinians, not just as a people but as individual human beings, have been dehumanized by much of the Jewish community — until this past week when I began looking into the “Pallywood” meme.

“Pallywood,” a portmanteau of “Palestine” and “Hollywood,” is the belief among some Israelis and their American Jewish supporters that most footage of Palestinian suffering at the hands of Israelis is faked. The meme came back to the forefront last week when many questioned the veracity of security-cam footage of the May 15 deaths of Palestinian teenagers Nadim Nawarah and Muhammad Salameh during a demonstration in the West Bank town of Bitunya. In a previous post, I examined the claim of Rabbi Kenneth L. Cohen, the director of the religious pro-peace organization, the Vine and Fig Tree Project, that the way the boys fell on camera was “inconsistent” with their having been shot. Explaining that from my own experience watching films of wartime executions I know this claim to be false, I concluded that such statements are an attempt to control the narrative surrounding controversial events before a proper investigation can be conducted.

Since then, the Pallywood meme has continued in both social media and on one of America’s most prestigious TV news networks. Rabbi Kenneth L. Cohen on May 27 tweeted an article alleging that Paul Hansen’s 2013 World Press Photo winning picture “Gaza Burial,” which captures the funeral procession of two Palestinian brothers killed in a 2012 Israeli airstrike, was faked. As you can see in Rabbi Cohen’s tweet itself, this allegation was swiftly debunked by the very media outlets that initially reported it.

There is lots of this, regrettably:”Award winning” Palestinian photo faked http://t.co/9TBhjul5BK

On May 22, CNN analyst Michael Oren was invited on air to address footage taken by a CNN producer showing that an Israeli soldier fired the shots that killed the young men. Oren responded to the footage not only by suggesting that the way the young men fell appeared “inconsistent” with their having been shot, but by stating repeatedly that they may have never actually died in the first place.

Never mind the crying throngs at their funeral — which you can see here — and interviews in the media with doctors who attempted to save their lives. Never mind human decency or even the slightest modicum of respect for their grieving families. Never mind the truth. Michael Oren is floating the idea, not just that what Palestinians say about how their children die is automatically suspect, but that the very existence of those same children is a matter open to debate.

Michael Oren is not just some paid talking-head on CNN; he was Israel’s ambassador to the United States from 2009 to 2013 and as such represents views that are mainstream not only within Israeli society but within Israel’s government.

Such comments casting doubt on whether a child who may have been killed by the IDF ever really died in the first place are not new. The death of Muhammad Al-Durrah, the boy who famously died in front of French TV cameras in September of 2000 during a firefight between IDF soldiers and Palestinian gunmen, has remained a matter of controversy ever since. While several credible investigations have in fact cast serious doubt on whether IDF fire, and not accidental fire from Palestinian fighters, killed the boy, Israel’s latest official investigation into the matter goes a step further. The report released in May of 2013 entitled “The France 2 Al-Durrah Report, its Consequences and Implications,” concluded that Al-Durrah may have never been killed in the first place. This despite his having had a massive public funeral and his father’s repeated offers to the Israeli government to have his son’s body exhumed to put the matter to rest.

In the past week, we’ve witnessed a prominent rabbi state that footage of two teenagers’ deaths was fake and then deny that the burial of two Palestinian infants was real. And now a former Israeli ambassador has alleged that two Palestinians apparently killed by the Israeli army may have never died at all.

It’s one thing to question how someone died. It’s an unfortunate fact of war that people sometimes lie and investigations are needed to find out the truth. But it’s a whole other matter to deny that a person has ever lived at all or to look at pictures of the funeral of a two-year-old boy and say without evidence that it is faked. It appears that when Palestinians are involved, death and burial, among the most sanctified of human acts, are no longer to be believed.

My Palestinian college friend, tragically, is right. For many Jews she might as well be subhuman. After all, what other people on Earth has not only the violent deaths of its children critiqued but their very existence denied? What other people is routinely told that their family members never really died?

We Jews should know better than any people just where such dehumanization can lead.