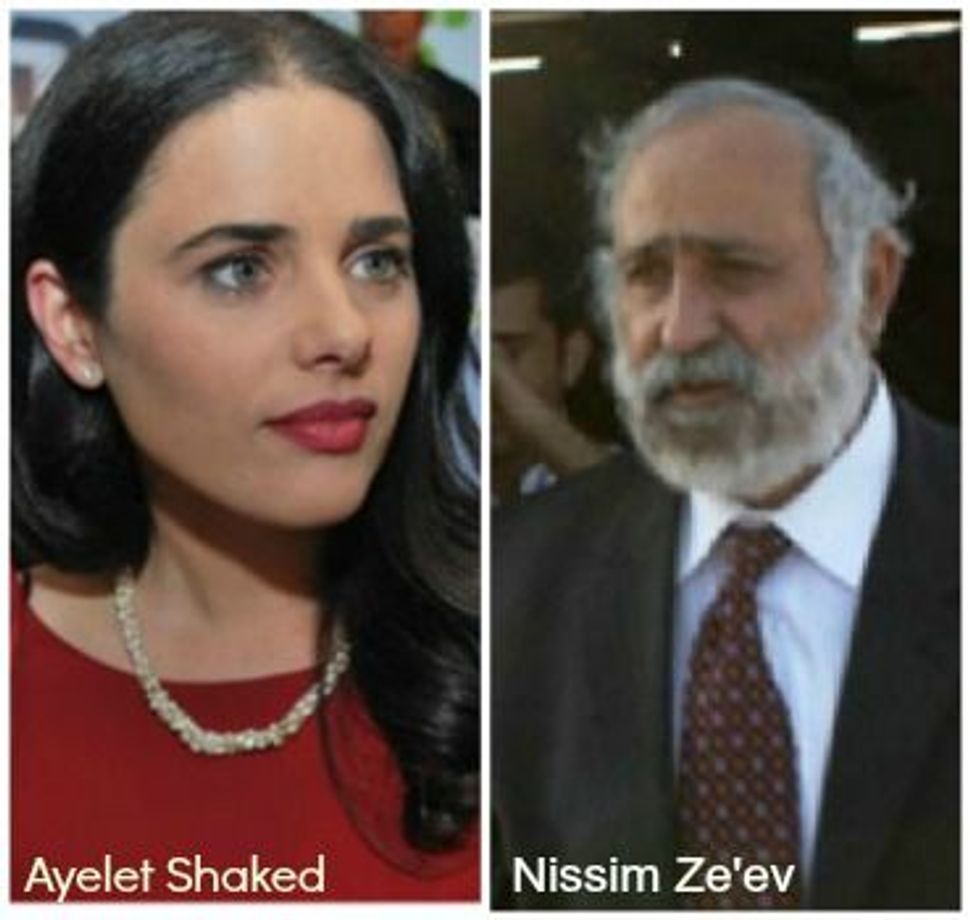 Unfortunately, as with so much else the organization touches, the facts of the case are a bit murky. Im Tirtzu claimed in a press release afterward (full text appears below) that it had participated in a meeting of the Knesset Caucus on the Struggle Against De-legitimization of the State of Israel. The meeting’s topic, it said, was “organizations claiming to be Zionist, but which actually espouse BDS philosophies,” alluding to Im Tirtzu’s conspiratorial view of the New Israel Fund. The meeting had been convened, the release said, “as a result of Im Tirtzu’s campaign” to link the New Israel Fund with the BDS movement.

But a news report on the pro-settler news site Arutz Sheva-Israel National News said the caucus had convened “for an emergency discussion on the topic of anti-Israel boycotts in the wake of the rise of the extreme right in Europe.” The report cited Im Tirtzu leader Matan Peleg as one of a string of speakers, most of whom focused their remarks on European antisemitism, the shooting attack at the Brussels Jewish Museum and what’s been described as a link between the shooting and anti-Israel incitement.

The delegitimization caucus is one of 132 such groupings of Knesset members registered with the speaker’s office to advance specific causes. They range from promotion of Israeli-Arab peace to annexation of the West Bank, higher education, autism awareness, Israeli Arab economic development and a one-member “Tuesdays without meat” caucus.

The May 27 meeting reportedly drew several dozen attendees, including a half-dozen guest speakers, all but one of them right-wing specialists in left-wing perfidy, as well as seven Knesset members. The seven included four from the settler-backed HaBayit HaYehudi-Jewish Home party, two from Yisrael Beiteinu and one, caucus chairman Nissim Ze’ev, from Shas.

According to several reports, including a detailed account at the Haredi website Kooker, Ze’ev opened the meeting with a declaration that “delegitimization leads to anti-Semitism and antisemitism leads to terrorism.” He called for “dealing with” sources of funding for organizations that promote delegitimization and “exposing their true face,” as there are some that “pose as Zionist organizations.”

He went on to note the strong showing of radical right parties in the recent European parliament elections, which he said demonstrates the rise of an extremist, anti-minority and especially anti-Jewish ideology among 25% of the population of Western Europe — apparently alluding to the Anti-Defamation League survey on global antisemitism. The murders in Brussels, he said, should be particularly worrying as they prove the rise of an antisemitism rooted in delegitimization.

He continued, according to Kooker:

The world isn’t interested in how many murderers there are in Arab countries, because that’s part of the Muslim way of life and the world accepts it, but when two Palestinians are killed in a demonstration in Judea and Samaria, even though the Israeli military announces unequivocally that the event was stated, the media prefers to spread the dishonest Palestinian version.

Another speaker, Knesset member Ayelet Shaked, the Jewish Home faction whip, declared that “if the governments of Europe won’t defend the Jews who live under their sovereignty, the Jews will have to defend themselves.” She said that delegitimization of Israel “is currently based on the Palestinian- Israeli conflict, but the bitter truth is that delegitimization is merely anti-Semitism hiding under more politically correct terminology.” Every generation finds new reasons in which to wrap its hatred, but they’re all based in the same hatred.” Therefore, she said, Israelis need to beware of Israeli organizations that come out against the state of Israel, and to “delegitimize the delegitimizers.”

To review: Delegitimization causes anti-Semitism. Also, that anti-Semitism is merely the same ancient hatred, which now disguises itself as delegitimization. Furthermore, Europeans should wake up to the fact that they are threatened by a far-right ideology that stigmatizes Jews and other minorities in their midst. What’s more, Europeans are oblivious to the fact that murder is part of the Muslim way of life.

Following is Im Tirtzu’s press release describing its version of the caucus meeting. Note the five-point action plan adopted by the caucus, including the formation of a task force (item No. 2), headed by Im Tirtzu, to prepare legislative and action initiatives to fight delegitimization. Also, a call to Knesset members marching in the New York Celebrate Israel Parade to “denounce any organization that takes part in de-legitimizing Israel.”

The Knesset’s Caucus on the Struggle Against De-legitimization of the State of Israel: calls for all Members of Knesset and those marching in the Celebrate Israel Parade on June 1 in New York to denounce any organization that takes part in de-legitimizing Israel.

On May 27, as a result of Im Titrtzu’s campaign, launched a few weeks ago to publicize the connection and similarity between the terminology and activities of BDS organizations and what NIF uses, the Knesset Caucus on the Struggle Against De-legitimization of the State of Israel held an emergency meeting on the topic of organizations claiming to be Zionist, but which actually espouse BDS philosophies.

After him, Im Tirtzu CEO Matan Peleg introduced the subject of the emergency meeting:

Israel is facing an unprecedented challenge, a unique phenomenon, which we call ‘the phenomenon of the New Israel Fund.’ However, this term is just a shorthand way of referring to all the de-legitimization against Israel in which organizations supported by the NIF are involved, with tens and hundreds of thousands of dollars going to each organization. These organizations are also heavily funded with thousands of Euros each year from European governments and other NGOs.

No democracy in the world should tolerate or accept such foreign involvement in its own domestic affairs. The phenomenon becomes even more complex when those organizations, flush with foreign funding, work to defame Israel, while holding themselves out to the world as pro-Israeli organizations.

In a packed committee room sat seven members of Knesset along with a large number of experts in the field. MK Nissim Ze’ev chaired the meeting, MK Ayelet Shaked attended, along with MKs Robert Iltov, Moti Yogev, Shimon Ohayon, Orit Struk and Yoni Chetboun,** who recently worked with Im Tirtzu on a proposed bill to make Jerusalem Day a national holiday.

Along with Mr. Peleg, experts making statements for the record included: former ambassador Alan Baker; Prof. Ofira Seliktar, who specializes in BDS organizations; Dr. Yehuda David, an expert in anti-Israel propaganda films; Attorney Nitzana Darshan-Leitner, chairman of the Israel Law Center; as well as representatives from a number of other organizations, such as the Institute for Zionist Strategies, Regavim and Israel Academic Monitor.

Below is the 5-point action plan that was a result of the meeting:

1.) The Caucus will promote legislation to protect the State of Israel against the challenges of de-legitimacy.

2.) The Caucus will establish a steering committee headed by Im Tirtzu that will convene at least once a month. The committee will include Knesset members, academics and representatives of various organizations that will create position papers, suggest bills and legislative changes and more.

3.) The Caucus will continue to strengthen ties with Zionist organizations in the Diaspora that are fighting BDS organizations and the international boycott of Israel.

4.) The Caucus will seek clarifications from the Ministry of Defense regarding national service personnel serving in organizations that engage in de-legitimization.

5.) The Caucus calls for all Members of Knesset and those marching in the Celebrate Israel Parade on June 1 in New York to denounce any organization that takes part in de-legitimizing Israel.