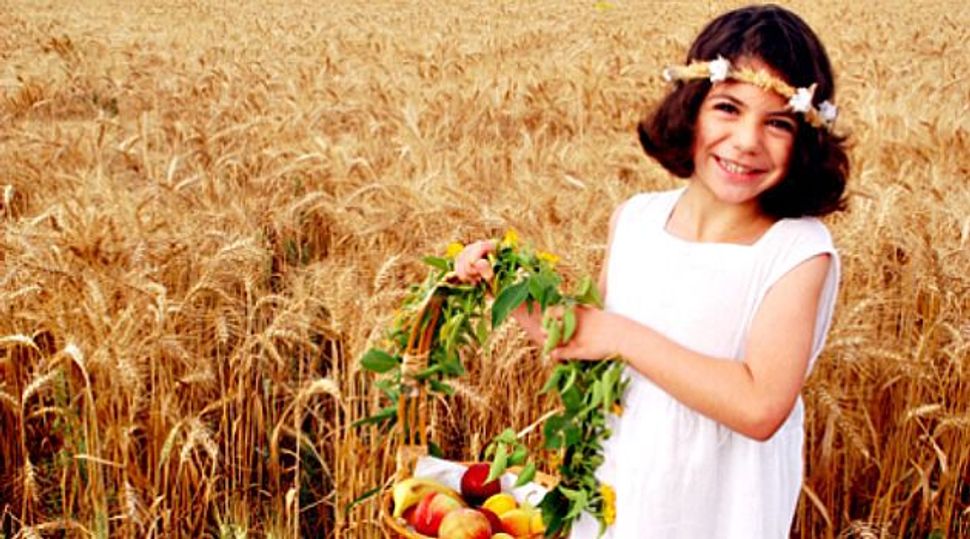 As a Jewish food educator, I’m often asked for ways to enhance holiday celebrations with authentically themed dishes for the season. What was once a simple plate of apples and honey for Rosh Hashanah becomes a series of prepared desserts featuring these key ingredients. Chanukah gelt can now be acquired with fair trade certification. Vegans can finally enjoy kale challah shipped across the country.

And yet, for Shavuot, folks only want to know about one thing: dairy. Since the majority of elaborate Shabbat and holiday dishes are centered around meat, when it comes time for Shavuot, people think: Finally, an opportunity to plan a delectable dairy meal!

Only problem is, dairy isn’t originally a Shavuot food at all.

The agricultural foundations of Shavuot, outlined in the Torah and later explained in the Mishnah, focus on two food groups: fruit and grain. Two main agricultural activities that took place in this season were the wheat harvest along with bringing the first fruits to the Temple in Jerusalem. These align with the original name of the Shavuot holiday: Chag HaBikkurim, or Festival of the First Fruits, and Chag HaKatzir, or Harvest Festival.

In the maftir Torah reading of Shavuot, in Numbers 28, we read: “On the day of the first fruits, your Feast of Weeks, when you bring an offering of new grain to the Lord, you shall observe a sacred occasion: you shall not work at your occupations.” If we are only looking for examples of how Jews originally observed Shavuot, the earliest documents focus on fruit, fruit, fruit — and also some grain. The Mishna details gathering one’s first fruits in elaborate baskets and traveling to Jerusalem in celebratory procession. It’s clear that Shavuot traditions at the time of the Mishna did not include dairy.

The most commonly referenced reason for eating dairy on Shavuot is intrinsically linked to the post-Temple rabbinic narrative of Shavuot as Chag Matan Torah, the Festival of the Giving of the Torah. As the pilgrimages to Jerusalem ceased, the rabbis refocused the holiday to center around the themes of revelation, covenant and Torah, substantiating these new themes with a series of calculations rooted in Torah text. Practically speaking, it would not have been possible for the Israelites to enjoy a meat meal on the day of the giving of the Torah, since it was on that day that they received the laws of kosher slaughter.

While many cultural food traditions tend to be rooted in a particular climate or in the dominant culture of a particular Jewish community, consuming dairy on Shavuot appears to have been quite widespread as early as the 1500’s, when Rabbi Moses Isserles wrote: “It is a universal custom to eat dairy food on the first day of Shavuot.” His reasoning? Shavuot should have two meals, one meat and one dairy, in order to parallel the two cooked dishes of Passover.

The Kitzur Shulhan Arukh, a 17th century text, links the name of the holiday — Chag HaKatzir, or Reaping Festival — to the Land of Israel as “flowing with milk and honey” (Exodus 3:18).

I was pleased to see that Claudia Roden’s “Book of Jewish Food” (Knopf, 1997) regards fruit as an authentic Shavuot food in addition to, or in combination with, dairy.

And how do we know that we should enjoy blueberry blintzes and plenty of strawberries along with delectable dairy dishes?

A Torah verse from the book of Exodus gives us a clue that these first fruits can be enjoyed along with a kosher dairy dish: “Bring bikkurim (first fruits) to the God’s Holy Temple; don’t cook a kid in its mother’s milk.”

For those of you still longing to bring alive the original fruit-based traditions in our post-modern world, alongside or in place of dairy dishes, here are a few tips:

• Check out your local farmer’s market or pick-your-own orchard. Buy one of everything and arrange in baskets for hors d’oeuvres or dessert.

• In the days leading up to Shavuot, plant your own edible forest garden so that you will have local fruit to enjoy in future years.

• Acquire wheat berries so you can grind your own flour. This is a great opportunity to bake with whole grains. Sift out the bran and germ if you’re only looking to bake with pure white flour. Most of us living in contemporary society have never processed wheat from whole grains; imagine what our white flour intake would be on a daily basis if we were responsible for sifting it all by hand.

• Experiment with a mock-cheesecake recipe that’s made with 100% fruit, such as raw strawberry coconut pie.

• Design a fruit-themed menu that includes salads and main dishes as well.

Whether you focus on dried fruits, fruits native to the land of Israel, or get creative with fresh berries and melons, everyone will enjoy extra sweetness throughout the meal.

Sarah Chandler serves as the Director of earth-based spiritual practice for Hazon’s Adamah Farm at Isabella Freedman Jewish Retreat Center. A Jewish experiential educator, community activist and spiritual leader, she focuses on the intersection of the Jewish calendar, agriculture, and sustainability.