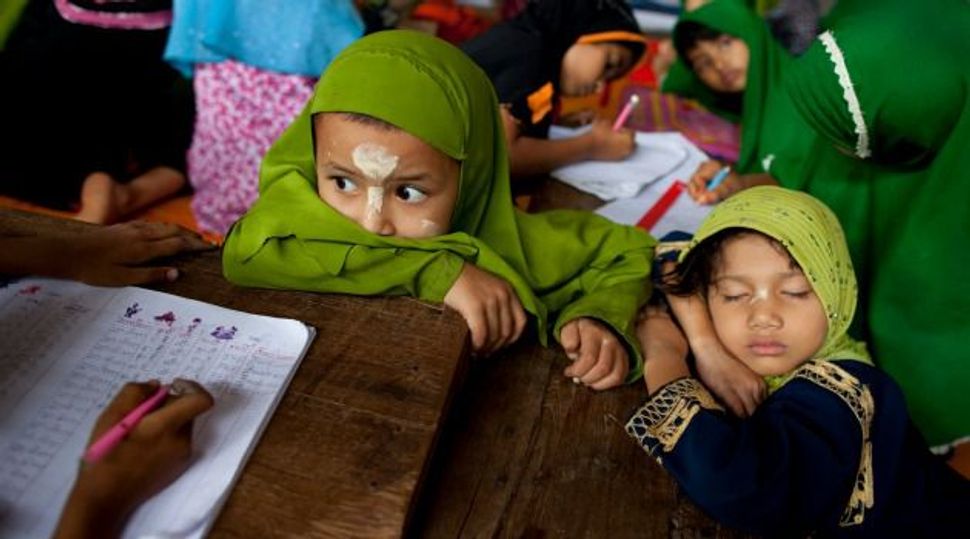 Even though I was raised in a Washington, D.C. suburb, I never spent much time in the district and definitely never toured the White House.

But last month, I joined 150 Jewish activists from 18 states to lobby my elected officials to support the International Violence Against Women Act (IVAWA) — part of the inaugural Policy Summit of American Jewish World Service (AJWS). My civic participation helped me identify the pronounced incongruities between culture on the Hill and the lives of Burmese refugees in Thailand on whose behalf I came to speak.

This moment was a long time coming. Last August, I applied to the AJWS Global Justice Fellowship. I traveled to Thailand with 20 Global Justice Fellows — rabbinical students, graduate students and law students — to learn more about the humanitarian crisis on the border of Thailand and Burma. We met with local organizations, supported by AJWS, that are working to advance basic civil and human rights for Burma’s ethnic minorities and Burmese refugees in Thailand.

My most meaningful encounter in Thailand involved the Karen Women’s Organization (KWO). The Karen State in Burma is largely undeveloped; people are mostly subsistence farmers and have weathered atrocious human rights violations during the decades-long conflict with the ethnic Burmese military government.

Over rustic yet delicious green curry, I sat with KWO leader Zion Dany, who described abominable conditions in the nearby Mae La refugee camp. More than 50,000 Burmese refugees live there, many since the camp opened in 1984. Zion spoke of a young woman who was raped and murdered in the camp weeks earlier. After the incident, camp officials cremated and disposed of her remains without conducting an on-site rape kit to identify and bring the assailants to justice. Zion spoke with conviction about the absolute necessity to establish protocols so that rape victims receive justice and legal protection, regardless of their citizenship or refugee status.

As I walked the halls of Congress last month, Zion weighed heavily on my mind. She regularly puts her life in danger as part of her work. Her commitment to the Karen people and their homeland resonated for me deeply as I considered the Jewish nation’s struggle for self-determination. Her resolve strengthened my own, and our collective efforts will one day enable justice to blossom.

I also reflected upon the violence that women in the Karen community experience and considered what the U.S. government can do to stop it — in Thailand, Burma and elsewhere around the world. The World Health Organization estimates that 1 in 3 women will be beaten, coerced into sex or otherwise abused in her lifetime. This injustice jolted me into action and is a driving force behind AJWS’s campaign We Believe to support the rights of women, girls and LGBT people worldwide.

I know similar thoughts occurred to all of the participants at the Summit as we urged our legislators to pass IVAWA. If passed, this bill would ensure that ending sexual and gender-based violence remains a top U.S. diplomatic and humanitarian priority. The issue is incredibly timely as the bi-partisan bill was introduced in the Senate just last month amidst the staggering news that Boko Haram kidnapped roughly 300 girls in Nigeria.

Despite this momentum, grueling terrain still lies ahead, which is why my colleagues and I walked resolutely to Capitol Hill to solicit our elected officials’ support. I walked along Senate and House hallways, the stately architecture, conspicuous privilege, and government-subsidized cafeteria food contrasting sharply with the simplicity of Zion’s surroundings and the almost daily threats she faces.

The youthful, cherubic-faced Hill staffers whom I passed provided the most glaring contrast. They traverse the nation’s corridors of power, focusing on their present work, in part, because every opportunity in life still ahead. In a brief respite, I looked at myself in the mirror and saw Zion’s eyes questioning if America will act on our consciences.

I have no doubt the time is ripe for the U.S. to send an indelible message to the world that we stand by IVAWA and with women and girls around the world. We seek to strengthen human rights in corners of the earth where the media lights are especially dim. When we illuminate these injustices, we exponentially increase the Or Ha’Ganuz, or divine radiance, that God produced during creation and that continues to reside in everyone.

I cannot thank Zion enough for reminding me of this. She has enabled me to better access my own voice and inner light as we transform the world through human initiative.