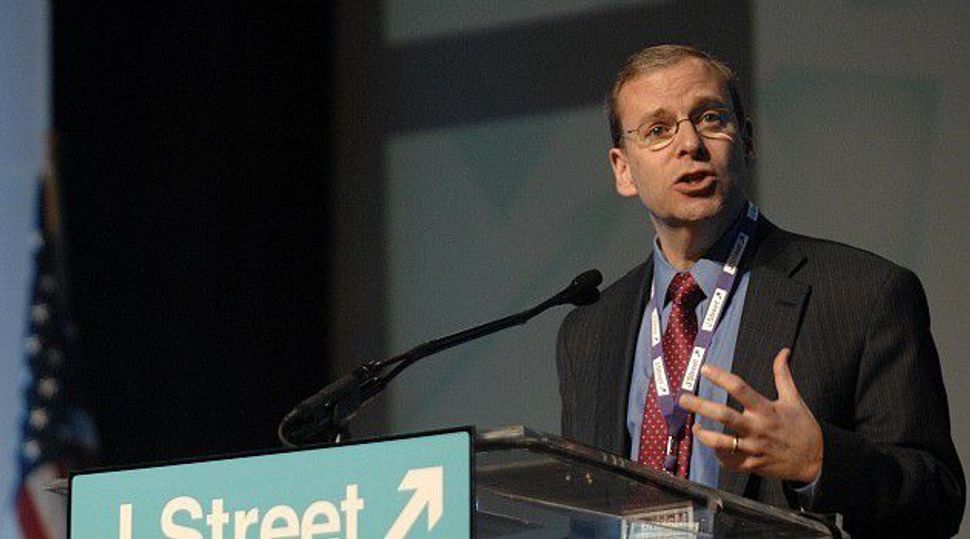 What is J Street doing? Why has it begun to act in concert with unambiguously right-wing Zionist organizations such as AIPAC and StandWithUs in their efforts to kill the Boycott, Divestment and Sanctions movement while offering no alternative for ending the occupation?

Because the truth is that J Street offers no alternative anymore; now that John Kerry’s talks have failed, and all the secretary of state has to show for them is a footprint on the seat of his pants courtesy of Benjamin Netanyahu’s government, America is through trying to make peace between Israel and the Palestinians. And everybody seems to acknowledge this except J Street. Which is not a surprise, because without America in the peace process, J Street’s reason for being is gone.

That’s tough; the organization is going to have to change or close shop. And I hope it does change successfully by finding a new way to advance the two-state solution. Moreover, I hope it finds a less antagonistic way than BDS to accomplish this. And if it does find such a way, I will join J Street in a minute, because as an Israeli I don’t particularly enjoy supporting the boycott of Israel — but I do it because I see no other way anymore to end the occupation and allow the two-state solution to come into being. And nobody else has come up with another way, either. So as far as anyone can see, it’s either BDS or occupation forever.

Yet, de facto, J Street has put itself on the side of occupation forever. With nothing left to offer except hollow pep talks about the peace process, it has been fighting BDS — often alongside the pro-Netanyahu, pro-occupation American Zionist right.

Its Seattle branch just joined with AIPAC, StandWithUs, the Jewish Agency for Israel and Hillel to defeat a BDS motion before the University of Washington’s student government. Not only that, its Seattle branch wrote on its Facebook page that “global BDS is an ineffective, and worse, anti-Semitic, movement.”

And now J Street is moving on to the Presbyterian Church (USA)’s General Assembly in Detroit, June 14–21. There it will argue against a motion for divestment from Caterpillar, Hewlett-Packard and Motorola, whose bulldozers, segregated biometric identifications systems and surveillance services, respectively, are used by Israel in its military dictatorship over the Palestinians in the West Bank.

J Street was instrumental in beating back the same motion in 2012, when it failed before the church’s General Assembly by a vote of 333–331. But that was then. Then it was possible to argue (although I’d already stopped) that there was still hope that the United States would pressure Israel into making peace. Then it was still at least reasonable for J Street President Jeremy Ben-Ami to tell the Presbyterian Church, “Reject divestment, and embrace full-on pursuit of the diplomatic efforts necessary to create genuine and lasting peace for Israel and the Palestinian people.”

But now? What argument can an anti-occupation movement make to the Presbyterian Church in June 2014 about why it should not divest from Caterpillar’s bulldozers, Hewlett-Packard’s ID system for Palestinians and Motorola’s surveillance machines? Because it would interfere with U.S. diplomacy in the Middle East? Because it would harden the Netanyahu government’s stance in the peace talks?

From an anti-occupation perspective, what is there to lose by a Presbyterian Church vote for divestment? Nothing. But what is there to gain? A blow against injustice, the kind that has been scaring the Netanyahu government and Israel lobby like nothing else — certainly not the Obama administration — which is a very good sign that the BDS campaign is on to something.

This time around, J Street again will be joined in the opposition by at least one right-wing Zionist organization: NGO Monitor, headed by one of the world’s leading McCarthyite Zionists, Gerald Steinberg. A friend of mine was at a talk Steinberg gave late in May and said Steinberg was going on about how “he spends time working with the Presbyterians, documenting why divestment represents classic elements of anti-Semitism.” Great stuff.

But this is the sort of company J Street keeps these days in the only meaningful action it’s involved in anymore: fighting BDS.

I know that that’s not what J Street wants to be, but that’s effectively what it has become by offering no path to peace while opposing the one way that still shows any prospect of success.

If J Street still wants to help heal Israel and Palestine, and I have no doubt it does, let it act like a healer and remember the Hippocratic Oath: First do no harm.

Larry Derfner is an American-born Israeli journalist who blogs at +972 Magazine.