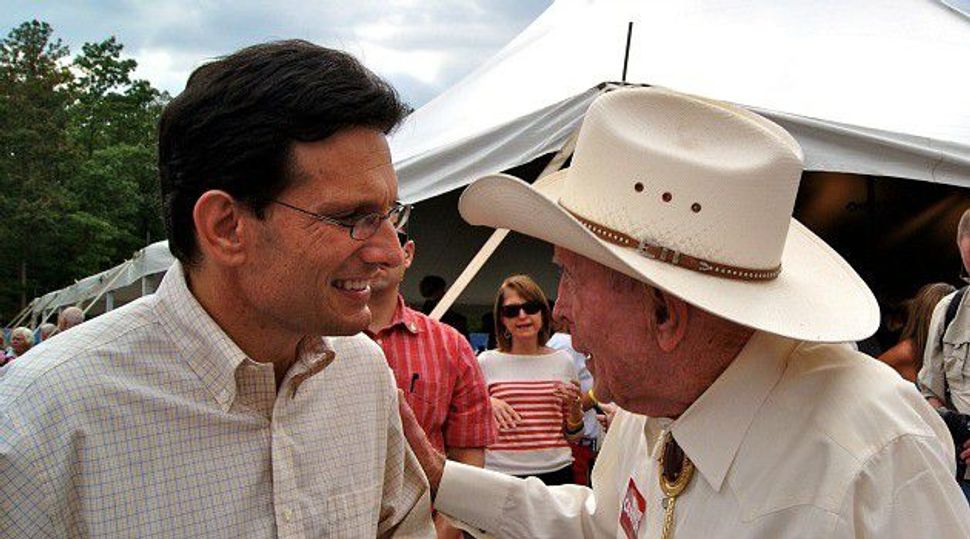 Nineteen months ago, on the eve of the 2012 elections, I asked the following question in these pages about Tea Party Conservatives and neo-conservatives like Eric Cantor: “Who’s using whom?”

That question may never be answered. But like Dr. Frankenstein, Rep. Cantor has just been killed by the monster he helped create.

The monster, of course, is the Tea Party. For years, Cantor — a conservative, but not an extremist — has been feeding this beast a regular diet of anti-Obama, anti-immigrant, and anti-gun-control rhetoric…when it suits him to do so. Many of Cantor’s Jewish supporters have basically tried to assure us that he doesn’t really mean this stuff, and is only saying it to get elected.

Unfortunately for Cantor, that’s exactly what many Virginia Republicans came to believe as well.

To be clear, this particular pandering precedes both the Tea Party and Eric Cantor. For fifty years, moderate(-ish) Republicans have struck a devil’s bargain with reactionary elements within the Republican base. They have delivered on some of the base’s social issues — such as opposing affirmative action, women’s reproductive freedom and LGBT equality — and in exchange, the social conservatives, populists and anti-government zealots have kept them in power, where they enrich wealthy benefactors, advance a hawkish foreign policy and dismantle the social safety net.

The conventional wisdom is that the Republican mainstream has been leading its wing-nuts along the primrose path. Throw the wackos a few social policy bones, the theory goes, and they’ll support economic libertarianism — especially if the latter is framed in terms of freedom, self-reliance and the land of opportunity. Wave the flag, and you can break the bank.

But as Eric Cantor just discovered, the wing-nuts are not always so well-behaved. Turns out, making people angry can sometimes get out of control.

This time, it was immigration. Cantor’s unlikely vanquisher, a quasi-professor named Dave Brat, successfully painted him as soft on illegal immigrants. Never mind Cantor’s actual record. Really, the winning issue could’ve been anything: gun control, Obamacare, Benghazi. Once you empower extremists, you can never be extreme enough in your opposition to whatever it is they hate. Feed the fire, and eventually you get burned.

Arguably, the same thing has happened to the GOP on a wider scale as well. Rupert Murdoch, Roger Ailes and the team at Fox News created a conservative monster so bilious that it couldn’t stomach Mitt Romney.

But what’s interesting about Brat’s rhetoric, in particular, is how clearly it tore apart what Ronald Reagan first sewed together: social and economic conservatism. “Eric Cantor represents large corporations who want a never-ending supply of cheap, low-wage foreign labor,” Brat said, over and over again. That is a fascinating, populist point. Again, never mind if it’s accurate; what matters is how it seeks to undo the GOP’s marriage of convenience between Wall Street and Main Street.

The possibilities have me giddy with excitement.

First, if the populist, conservative Christian base bolts the GOP, there is no GOP. Put it this way: about 30% of America is made up of conservative white evangelicals who almost all vote Republican. Assuming a 50/50 split between the two major parties, that means that 60% of Republican voters are conservative white evangelicals. Not the “Republican Jewish Coalition,” not John McCain, but generally less educated, less affluent white people who are terrified of 21st century, multiracial America.

Let’s set aside whether that fear is racist or not. The point is that it’s real. And if even a quarter of people who are motivated by nativist anxiety leave the Republican party, there aren’t enough moderate Republicans to win an election.

What if the nativists don’t leave the GOP — but, like Dave Brat just has, take it over?

This is even better news for the Democrats. As a recent Gallup poll showed, Democrats have a 45% lead over Republicans among non-white voters. (Republicans have a 10% lead among whites.) And the so-called “new electorate” is increasingly non-white. Could Republicans change these numbers? Maybe Marco Rubio or Ted Cruz could — but not Dave Brat.

Whatever its ethical qualities, white nativism is a losing electoral proposition. It plays well among the Republican base, but it alienates people of color and it fails to sway moderates. It might even motivate Latinos and African Americans to vote in greater numbers this year. Most importantly, it could determine who the Republican presidential nominee is in 2016, what promises he’ll have to make to the anti-immigrant right, and how much that will hurt him with non-white voters. After all, no one wants to be the next Eric Cantor.

I think this is a good thing, especially for American Jews. Cantor’s was the face of a party that has grown much meaner and more extreme than he is. Perhaps he was just using the reactionaries to stay in power — or perhaps they were using him. Either way, he muddied the waters, obscured the choices in play.

Eric Cantor stood for the proposition that you could be relatively moderate, motivated primarily by fiscal rather than social conservatism, and still have a home in the Republican party. This election showed that you cannot.