Did Eric Cantor Lose Because He’s Jewish? You Betcha. 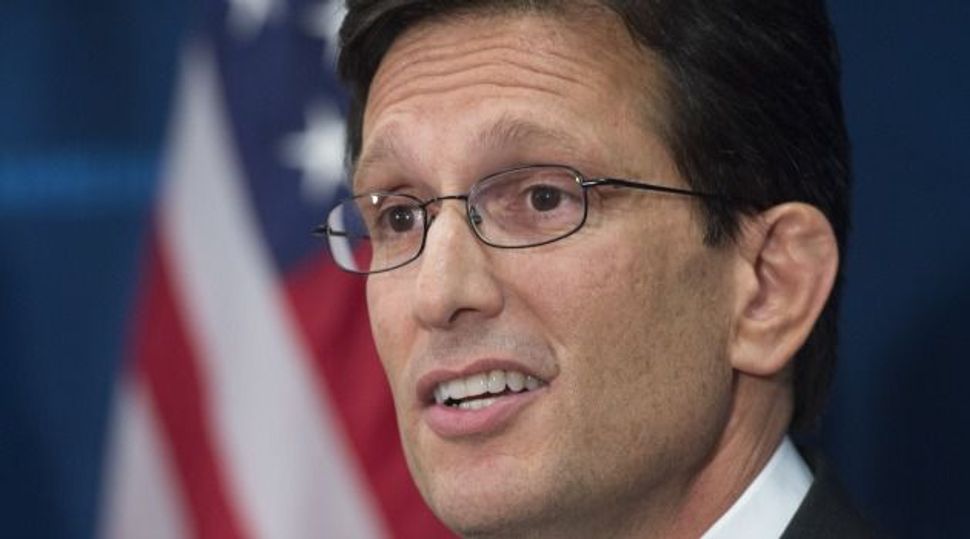 Did Eric Cantor lose because of his Judaism? Everybody’s been tiptoeing around the question for the last two days, so let’s just come out and say it: Of course he did. That and redistricting.

The Virginia Republican leadership accidentally did him in by trying to build him a safer district. They took away some of the purple zones in Richmond and its suburbs and giving him some solid red countryside further north.

What the GOP’s redistricting mavens forgot to factor in — what’s eluded pretty much the entire chattering class wrestling with this earthquake — is that the prairie fire that’s turned so much of middle America red is as much about Christianity as anything else.

And if it’s about Christianity, then it’s also about not-Jewish. How does that factor in? Most talk of Jews in politics begins and ends with Israel and anti-Semitism. If it’s not one of those two, we’re done. Hence the endless repetition of the line that Dave Wasserman of Cook Political Report gave to the New York Times: “You can’t ignore the elephant in the room.” No, you can’t. But nobody knew what to make of the elephant. (Actually, it’s more about the elephant that’s suddenly out of the room, isn’t it?) Even Wasserman didn’t mention it in his Cook coverage. Yes, Cantor’s Jewishness mattered. Now can we please talk about something else?

Right now. the main point is that one can be pro-Christian without being anti-Jewish. Practically speaking, Jews feel threatened by a political movement that seeks to put religion — the majority religion, which isn’t ours — at the center of the nation’s public life. It’s exclusionary. It arguably violates the Constitution, which says (Article VI) that there may not be any “religious test” for public office. The Christian right is all about judging candidates for office by their religion — by which they mean the values that the candidates bring to the table. Judging candidates by their values sounds like it ought to be center-stage in politics. But how do you do that without applying a religious test? Christian conservatives say the clause bars legislation that would apply such a test, not the personal views of the voters.

It’s not that they don’t like Jews. I’d bet that 90% of the 36,000 zealots who turned out to vote for David Brat on Tuesday (vs. 29,000 for Cantor) don’t have an anti-Semitic bone in their body. It’s just that they love Jesus. They want more religious values guiding and governing our public life. And by religious values they mean Christian values. That’s David Brat’s main calling card.

There’s been a lot of writing in the last few days about his background, mostly by liberals snidely trying to prove that he’s some sort of Christian separationist wacko. The implication seems to be quite unfair, but the basic facts are pretty clear. He got his B.A. in business administration at Hope College in Michigan, an institution of the Reformed Church in America whose mission, according to its website, is “to educate students for lives of leadership and service in a global society … in the context of the historic Christian faith.” He went on to get an M.A. in Divinity at Princeton Theological Seminary in New Jersey, the nation’s largest Presbyterian seminary, which

prepares women and men to serve Jesus Christ in ministries marked by faith, integrity, scholarship, competence, compassion, and joy, equipping them for leadership worldwide in congregations and the larger church, in classrooms and the academy, and in the public arena.

His Ph.D., from American University, is in economics, which he teaches at Randolph-Macon College in Ashland, Virginia, a private liberal arts school affiliated with the Methodist church.

He seems to have written and spoken a fair amount about connecting theology, politics and economics, include what he’s called “Christian capitalism,” meaning a free-market system guided by Christian values. He made an argument for it in a 2011 article that Huffington Post, ThinkProgress and the Wall Street Journal have all made a big deal about because it warns that a failure of Christian-guided economics is what led to Hitler and the same thing could happen again. The headline in Think Progress headlines its expose “David Brat: Embrace Christian Capitalism, or Hitler Will Come Back Again.” It makes it sound like Brat is threatening to bring back Hitler, when he’s doing the opposite. He believes his version of Christian values will help save America from that sort of disaster.

Nearly all the coverage of the vote has focused on how the Tea Party defeated Cantor by attacking him on immigration and big government. That does seem to be the language that was used in the campaign, but it doesn’t make sense that those were the issues that brought people out. The national Tea Party movement apparently wasn’t involved at all. When local reporters followed the ground campaign, they seemed to run into Christian organizations as often as Tea Party ones. This Brat-enthusiast blogger, for example, goes on about how it was his personal touch and his “real conservative” politics — as opposed to Cantor’s big Washington ties — that make him the right guy. On the other hand, when she identifies herself at the top of her blog, it’s as “a wife, mother, teacher and blogger who is passionate about Christian Conservative values in the political world.”

Our problem in unraveling the Cantor mystery is that we suffer from a poverty of language and imagination in discussing the relationship between Jews and politics. If we want to examine the impact of a Jewish factor in any given race, we ask if Israel or anti-Semitism played a role. If not, we’re done. Hence the “Hitler” stuff in HuffPo and elsewhere.

The Washington Post, as part of its generally excellent coverage of the race, asked leaders and activists in the local Richmond Jewish community whether they’d seen any anti-Semitism in the race. The reply: Nope. There was a smidgeon of it when he first ran for Congress in 2000, but none this time.

“If we had gotten wind of it, the Jewish community would have reacted. We wouldn’t have let something like that percolate,” Richmond lobbyist and Jewish community activist Richard Grossman told the Post.

By the same token, Philip Klein, writing in the conservative Washington Examiner, indignantly huffs that public references to Cantor’s Jewishness and the district’s “strong evangelical presence,” as Norm Ornstein of the American Enterprise Institute put it in a New York Daily News analysis, are “despicable.” And Klein notes that he’s not the only one who’s outraged by the injection of religion into the post-race analysis.

As Commentary’s John Podhoretz put it, Cantor’s “Judaism had nothing to do with his loss, and the only reason for suggesting otherwise is to tar David Brat and the voters of the Seventh Congressional District in Virginia with the taint of anti-Semitism. Shameful.”

No, anti-Semitism isn’t the only reason to bring religion into the discussion. As a matter of fact, what happened in Virginia on Tuesday looks like something that Irving Kristol, the “godfather” of neoconservatism (a title he wore with pride), wrote about in that same Commentary magazine back in an August 1991 essay, titled “The Future of American Jewry,” that was irritating at the time but may be turning out to have been prophetic. It’s simply that those who want America to become more Christian will inevitably be creating a society that’s less welcoming and inclusive for Jews. Kristol expected that most American Jews wouldn’t like what he saw coming, but in balance it would be better for America and for American Jews.

“Secular humanism,” Kristol wrote, is creating a “moral disarray” that’s proving disastrous for American society. In response, he predicted, “the overwhelming majority of Americans” are going to return to religion, which will mean “some version … of Christianity.” And

as American society becomes more Christian, less secular, the “wall of separation between church and state” will become more porous. In all probability, we shall see a turning back of the clock, with the place of religion in the American “public square” more like that which prevailed in the 19th century, as against the 20th.

Jews won’t be happy about it, he wrote. The advance of secular humanism has granted Jews “a civic equality and equality of opportunity undreamed of by previous Jewish generations.” As American becomes more Christian,

Jews will have to adapt. That adaptation may involve changes in Jewish attitudes toward such matters as school prayer and the like; it would also surely imply a greater sensitivity to Christian feelings than has been evident in certain Jewish organizations in recent years.

There “may be a revival” of “the kind of economic and social discrimination that was common before World War II,” though it’s “unlikely.” Mostly, “Jews will continue to be nervously ‘at home’ in America.”

At the same time, inevitably, Jews will perforce become “more Jewish,” which at the very least will mean a firmer integration into the Jewish community, as well as becoming more observant, though not necessarily going all the way to strict Orthodoxy.

I called Kristol after I read the article. Did he mean, I wondered, that Jews would have to draw in among themselves and live more separately from America at large? He did indeed.

And what about him? He’d started his journey years ago as a Trotskyite and remained quite secular. Had he now joined a synagogue? Yes, he had. What denomination? I asked.

“Conservative,” he said. “I looked for a neoconservative one, but I couldn’t find any.”

Did Eric Cantor Lose Because He’s Jewish? You Betcha.