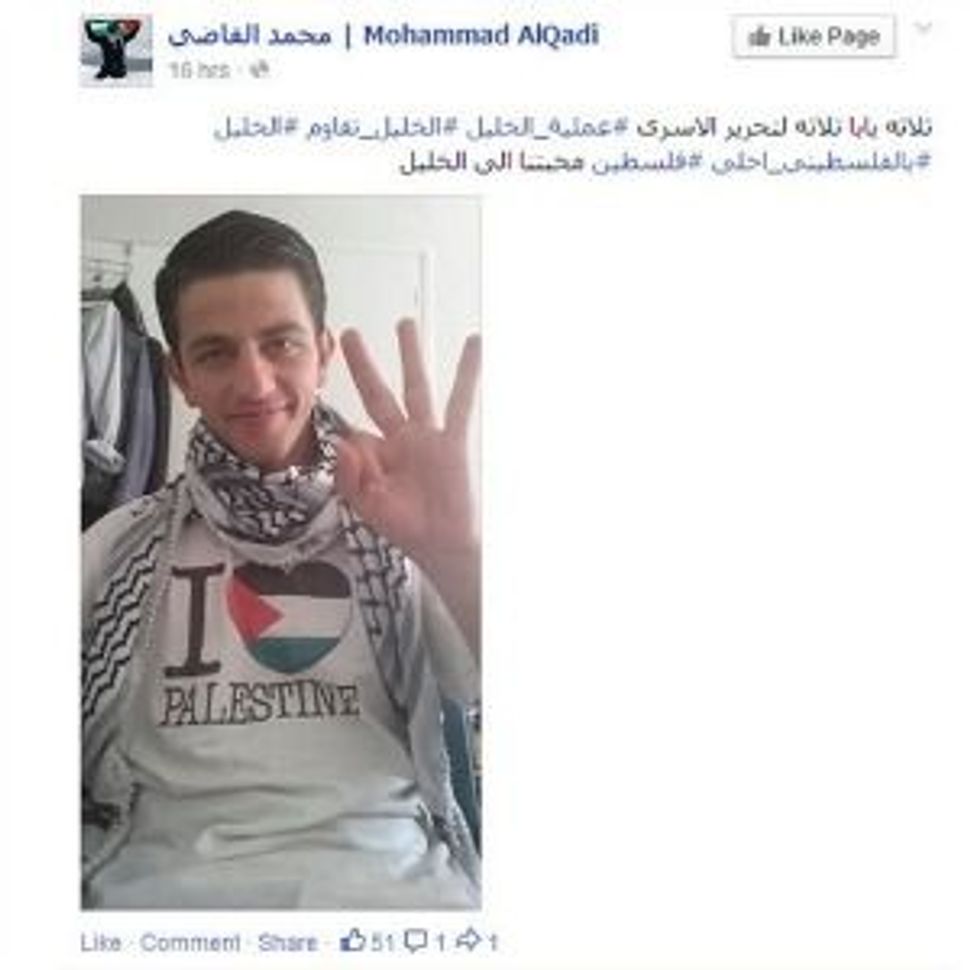 Since the kidnapping of three Israeli teens last Thursday, the Israeli media has been engaged in a full court press to fill in the blanks and tell a compelling story — whether or not it’s true.

Today, I came across a Facebook post from Mohammad AlQadi, a Palestinian student and activist living in Lyon, France. His picture had been posted (without permission) to an article in Walla, a major online news source for Israelis. The article reports on a campaign to support the kidnappers by holding up three fingers as if to gloat that three Israelis have been abducted.

According to AlQadi, the photo of him with three fingers up was taken last year. The three fingers that he was holding up were related to last year’s Arab Idol winner Mohammed Assaf, a Palestinian singer born in Gaza. The three-finger salute in that context refers to the campaign to vote for Assaf on the show by choosing option 3.

AlQadi had been trying to get the picture taken down, which seemed to me like a normal reaction to the situation. A colleague and I also contacted Walla to tell them about the error. The photo was taken down soon after. But the problem remains.

The issue here is not about whether or not there are actually people who support kidnapping. There are most definitely people saying and doing hateful things: Not all of these photos were taken out of context. Of course, hateful people exist on all sides. For example, there are the nearly 20,000 supporters (at last count) of this despicable page calling for a Palestinian “terrorist” to be murdered every hour until the three Israelis are returned. A quick scroll will expose you to a high level of anti-Palestinian racism and hate.

The conversation, which should be focused on finding these young people, has turned into a hotbed of racism and ultra-nationalism, and the overzealous media has a lot to do with it. There are too few paying attention to the veracity of what is being reported on, or what content we are allowing to guide the collective conversation, which should be centered on getting young people home to their families and friends, working to end the occupation, and building a just peace.

AlQadi says that photos like the one of him posted on this Vocativ piece — topped by an Arabic-language Facebook status that reads “Three [kidnapped] to set our prisoners free” — are photoshopped. Buzzfeed’s report supports his story.

Meanwhile, it’s impossible to tell which of the photos on Walla’s post do, in fact, show supporters of the kidnapping and which simply show people who are supportive of singing, or the Hunger Games, or the Scouts.

At least one un-researched photo was put on that list in a frenzy to show examples of how “they” hate “us,” in order to tell a story that, in reality, is full of holes.

One photo reminds us of the media’s eager willingness to take on the role of showing their audience who the “enemy” is — and when there isn’t a good visual, they make it up.

A. Daniel Roth is an educator and journalist living in South Tel Aviv. You can find more of his writing and photography at allthesedays.org and follow him on Twitter @adanielroth