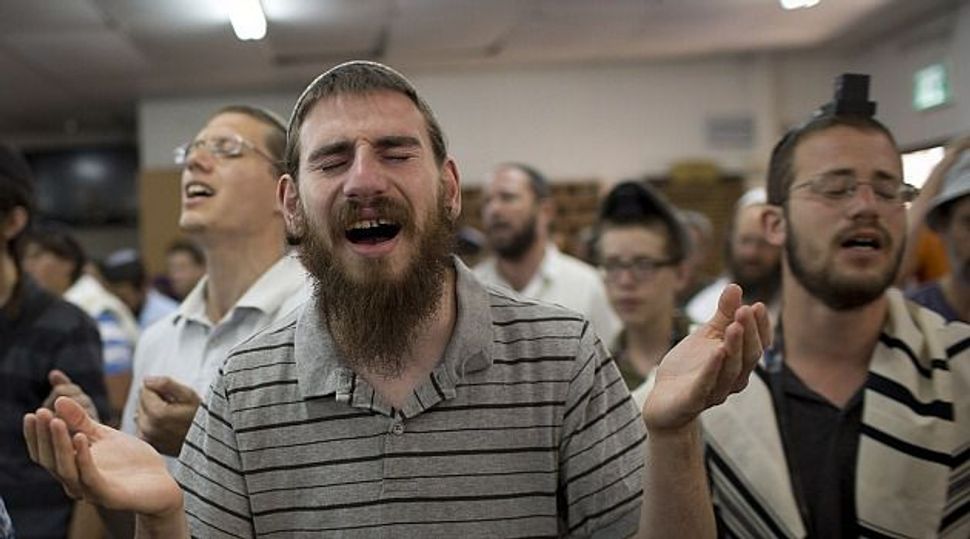 (Haaretz) — Like (almost) everyone else, I hope against hope for the safe return of the three kidnapped yeshiva students. One can only imagine their nightmarish ordeal as well as the agony and anguish of the father or mother whose child has disappeared under such bone-chilling circumstances.

But it is not only the immediate families that I am concerned about. In fact, the dignified and even inspiring public appearances of the worried parents leads one to pray that they will be able to cope with the worst, if it should come to that, God forbid. But Israel – or at least large parts of Israeli society – may not be so resilient: the killing of the three boys could push us closer to the edge that we’ve been long approaching.

I am not talking security here, though that too could deteriorate in the wake of what seems to be Israel’s strategy of achieving long held objectives under the guise of searching for the missing students. And I don’t think there is much cause for concern at this point about Israel’s international image, as the world’s attention is on the World Cup in Brazil and the disintegration of Iraq and, if there’s anything left, on the ongoing turbulence in the Ukraine.

I am less focused on the tangible and more on the emotional and psychological toll of the kidnapping on the Israeli psyche. No one can deny that Israeli society has grown more insular and less tolerant, especially over the last decade: prone to bouts of self-righteousness, blind to its own transgressions, allergic to dissenting points of view. The despicable crime committed by the terrorists who carried out the kidnapping could hasten this dangerous and ongoing process.

You can see it in the Knesset, of course, in anti-democratic legislation that is proposed regularly and, increasingly, ratified. You can read it on social media and in the lightly moderated comments of major news outlets in which racist and often homicidal anti-Arab and anti-leftist rants have become so routine they pass unnoticed. You can hear it in the hyper-inflammatory rhetoric such as the explicit and implied threats to Israeli Arab MK Hanin Zoabi’s life following her offensive but nonetheless democratically-protected claim that the kidnappers are not terrorists. You can view it in the tens of thousands of “likes” given in the past 48 hours to a Facebook page that calls on the government to execute Palestinian ‘terrorists’ once an hour until the captured yeshiva students are released; or the government minister who thinks its OK to accuse the United States of being an accomplice to terror because it did not sever its ties with the Palestinian unity government.

It is an internal fire that has spread, unabated, despite the recent years of relative quiet. It is a progression – regression is probably a more exact term – that is marked by the outbursts of violence that sparked it and fueled it: the traumatic suicide bombings of 2002-2004, the transformation of Gaza to a Hamas-controlled launching pad for hostility and rocket fire; Operation Cast Lead and its widespread condemnation, the Mavi Marmara affair and the ensuing Goldstone report.

With each passing phase, Israelis have gradually grown more nationalistic, more thick-skinned and more unsettled. While they wax indignant now about the world’s apathy towards “our boys,” only a handful gave a moment’s thought to the two Palestinian boys gunned down last month in Bituniya in an incident that the IDF has so far smothered under a dark cloud of denials and obfuscation. And anyone who dares mention that sorry incident, or the harsh punishment now being meted out to hundreds of thousands of Palestinians in the wake of the kidnapping, is immediately subjected to a barrage of vilification, accused of “moral equivalence” and labeled a “traitor.”

Not everyone takes such a grim view of this unruly discourse. Writing in the Los Angeles Jewish Journal about the acrimony and political bickering that have served as a backdrop to the tense search for the three kidnapped settlers, Shmuel Rosner says: “If this horrid crime of abduction is a test for Israeli society, I see no reason for great worry. The debate, the anger, the non-stop bickering, the fiery exchanges on social media, are all a sign of strength.”

Possibly. But they could also be viewed as manifestations of a sense of victimhood that leads to viciousness, an indication of a great frustration seeking release, a sign of a society losing its grip. The cognitive dissonance that most Israelis live with, their inability to reconcile their sense of self-righteousness with the world’s dim view of the occupation, leads them to cling to the “whole world is against us” maxim, or to believe in an endemic anti-Semitism that exists regardless of Israeli behavior or, increasingly, to ominous efforts to locate and implicate the enemies within, the well-poisoners and the back-stabbers among us.

“The fervor and ceaseless activity of the believers, on the one hand, and intimidation practiced on opponents and the lukewarm, on the other, are the instruments by which the desired ‘general will’ is made to appear as the will of all. Only one voice is heard, and it is voiced with such an insistence, vehemence, self-righteous fervor and a tone of menace that all the other voices are drowned, cowed and silenced.”

This is what the late historian Jacob Talmon wrote in his seminal 1952 book, in which first coined the term “Totalitarian Democracy.” After the kidnapping and the ensuing outrage, we may not be as far from his concept as you may think. The fuses that have been lit by true believers and the fires that have been stoked by cynical politicians await the trigger that can launch the chain reaction that will change things forever.