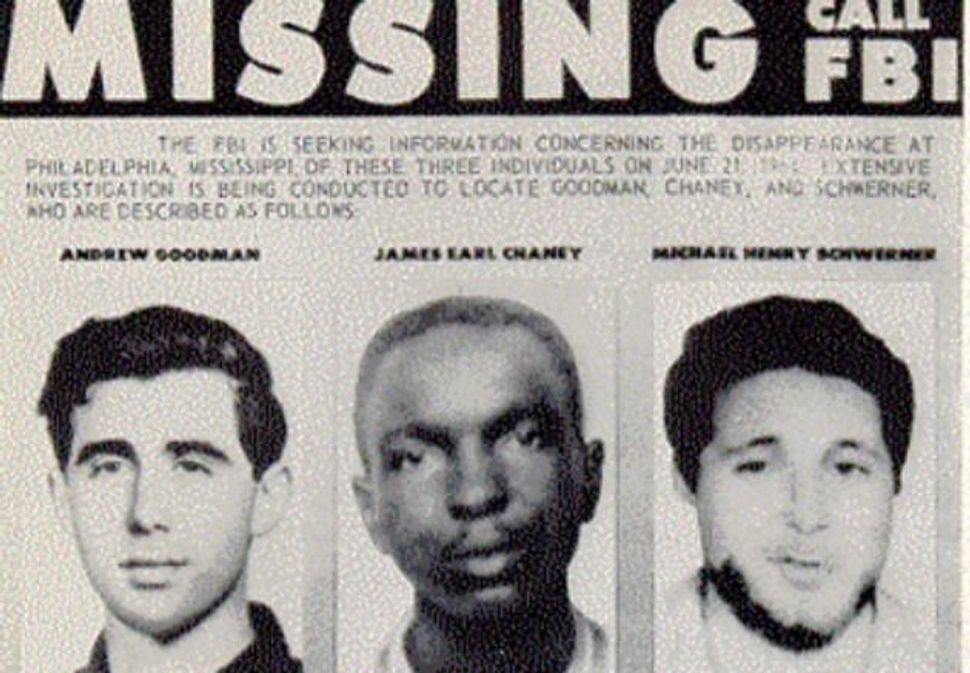 This weekend marked the 50th anniversary of the deaths of James Chaney, Andrew Goodman and Michael Schwerner, the three civil rights workers murdered by a lynch mob near Philadelphia, Mississippi, while registering voters during Freedom Summer 1964.

Chaney, 21 at the time of his death, was an African American and a Mississippi native. Goodman and Schwerner, respectively 20 and 25, were Jewish New Yorkers who had volunteered to spend the summer on a Mississippi voter registration drive organized by CORE (Congress on Racial Equality), along with thousands of other northern whites, an estimated half of whom were Jewish.

For some reason, the yahrzeit of the three has not become an annual memorial day on a Jewish calendar that’s packed with memorials for Jewish heroes and martyrs. Goodman and Schwerner should be counted among the most important heroes in American Jewish history. Perhaps some day we’ll know how to tell our own story. Maybe then our young will care enough to stick around.

And by the way, here’s a memo to anyone tempted to kvetch about defending our own people before worrying about others: Before the civil rights movement, Jews were kept from working in most industries, living in most neighborhoods and attending most colleges except under numerical quotas. The Civil Rights Act of 1964, passed in the emotional immediate aftermath of the murders, was drafted to outlaw discrimination “on the basis of race or religion.” We were fighting for ourselves.

Here are some songs written to celebrate their lives and honor their deaths, as well as one Yiddish song, “Donna Donna,” written a quarter-century earlier but profoundly appropriate, I think, to the day. The performers are Tom Paxton; Simon & Garfunkel; Harry Belafonte (singing a Pete Seeger-Frances Taylor song); Joan Baez; Richard and Mimi Farina (she was Joan Baez’s sister); Nechama Hendel; and wrapping it up, one of my favorite Phil Ochs songs, “Here’s to the State of Mississippi.” All the songs were written by the performers except where noted.

Harry Belafonte: “Those Three Are on My Mind.” (Written by Pete Seeger and Frances Taylor. Hear Pete singing it here.)

Simon and Garfunkel: “He Was My Brother” (for Andrew Goodman, their friend and classmate at Queens College).

Nechama Hendel: “Donna Donna” (the Yiddish original, by Aaron Zeitlin and Sholom Secunda). (For Joan Baez’s famous performance of the English version [“…Calves are easily bound and slaughtered, never knowing the reason why, but whoever treasures freedom like the swallow has learned to fly”] click here.)

Phil Ochs: “Here’s to the State of Mississippi.”