Why We Should Honor Slain Civil Rights Workers With Jewish Holiday 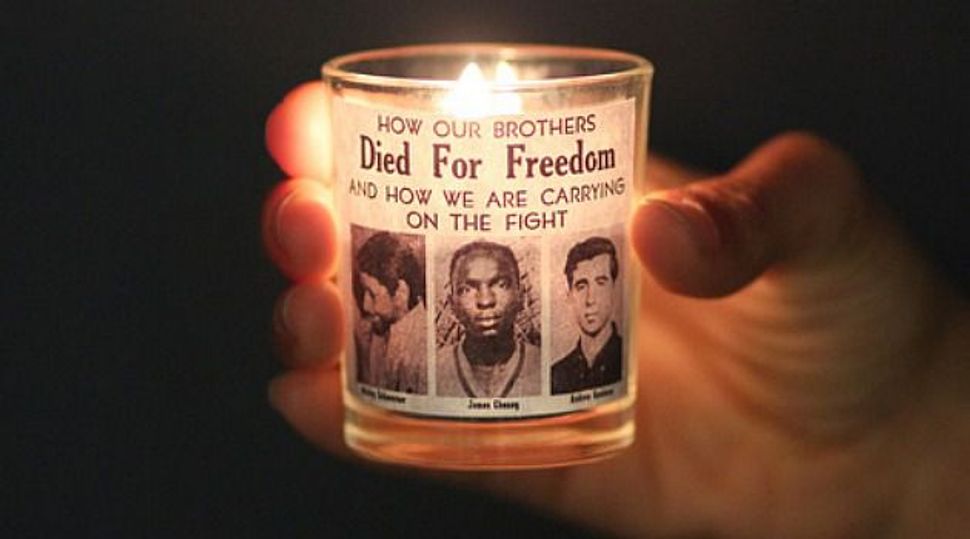 For much of America, the 50th anniversary of the Mississippi civil rights workers’ murders on June 21 was a moment for quiet reflection. The lessons are familiar, but it’s useful to be reminded now and then: how far we’ve come in a half-century, the price that was paid, the tasks that remain and our stubborn differences.

For American Jews, though, the anniversary is more: it’s a rude wakeup call. As loudly as those three murders resonate across America’s generations, they thunder through American Jewish history. They cry out to us. And we’ve largely forgotten how to listen.

James Chaney, Andrew Goodman, Michael Schwerner. One was black; the other two were white and Jewish. That fact sent America a double-edged message. Southern blacks had been murdered and lynched by the thousands for decades. Few deaths were prosecuted. The rest of America scarcely noticed. Only the murder of two northern whites awakened the nation to the violence of Southern racism.

For Jews, though, the murders’ meaning was straightforward. Some 1,000 northern whites went to Mississippi to register black voters, following Schwerner and Goodman, during that Freedom Summer of 1964. Roughly half were Jewish. Indeed, among thousands of whites who went south for civil rights marches and Freedom Rides between 1961 and 1964, between a third and a half were Jewish. Those were our kids.

And not by coincidence. From the beginning, the civil rights movement was an organized campaign by blacks and Jews to end rampant discrimination against blacks and Jews. In 1945, when the NAACP and the American Jewish Congress together launched a state-by-state campaign to change laws, Jews and blacks were routinely excluded from whole neighborhoods, barred from countless jobs and restricted from most colleges.

By 1950 the Urban League, Anti-Defamation League, American Jewish Committee and others joined up. Unions and churches followed. The coalition, called the Leadership Conference on Civil Rights, was chaired by NAACP director Roy Wilkins and staffed by Arnold Aronson, deputy director of what’s now the Jewish Council for Public Affairs. The famous black-Jewish alliance was not some liberal myth but an organization with an address and a letterhead.

It’s also a fact that the alliance turned rocky in the late 1960s. By the time the Civil Rights Act was enacted in 1964, discrimination against Jews had largely disappeared. Parts of the black community turned inward, demanding control of the movement in the name of “black power.” Thousands of young Jewish activists were harshly ejected. In the 1970s black-Jewish feuding over affirmative action and racial quotas led to confrontations and finally an angry divorce.

Jewish organizations were adopting their own inward-looking agenda in the 1970s, spurred by the trauma of Israel’s isolation on the eve of the Six-Day War, combined with the burst of pride following the war, the rise of Palestinian terrorism and the emergence of the Soviet Jewry movement.

But while the organized Jewish community turned inward, the Jews didn’t. Jews remained as liberal as ever. There was an uptick in Soviet Jewry and pro-Israel activism, but not broad enough to change the basic math. The armies of Jewish students who once populated the civil rights and antiwar movements now poured that energy into women’s rights and the environment. The difference was that now the Jewish organizational world wasn’t marching with them. In fact, significant national Jewish voices, notably Orthodox rabbis and neoconservative intellectuals, were publicly attacking young Jews who continued rallying for liberal causes.

By the end of the 1970s, not coincidentally, scholars noticed a rising disengagement of Jews from Jewish life: declining synagogue attendance, declining Jewish organization membership, fewer donors to Jewish federations and rising intermarriage. It was called assimilation, but it wasn’t your father’s assimilation. Time was, Jews disconnected and disappeared into the general population. The new assimilated Jews were still calling themselves Jews and, surveys showed, proud of it. Interfaith couples were joining Reform synagogues to prepare their children for bar and bat mitzvah, holding Passover seders, celebrating Hanukkah and — well, not much else. They weren’t heading out, but they weren’t particularly in, either. The organized community had nothing to say to them.

A generation later, what distinguishes them as Jews more than anything is their uniquely Jewish liberalism. For many — I’m basing this on years of traveling the country, meeting Jews — liberal values are their Jewish identity. They don’t get much reinforcement from the community, except for some spotty Reform rabbinic activism. And yet surprising numbers refuse to give up being Jewish, even when it’s only through a Jewish father’s Jewish father (just ask Kirk Douglas’s grandson Dylan, newly bar mitzvahed in Jerusalem).

How can the Jewish community approach them, when its agendas, institutions and even calendar so little resemble their Judaism?

We might start with the civil rights workers. Their martyrdom, and the heroism of thousands more who faced beatings and jail in the South, is a peak moment in American Jewish history. It’s time we honored it. Let’s start marking our own American Jewish experience on our sacred calendar. In our lifetimes we’ve added Israeli Independence Day, Holocaust Day and even Jerusalem Day. Why not Civil Rights Heroes’ Day?

Here’s one approach: The murders took place on the 12th of the Hebrew month of Tammuz. (This year that’s July 10.) Five days later is the Fast of the Seventeenth of Tammuz, commemorating Roman troops’ breaching the walls of Jerusalem in 70 C.E. It begins the three-week mourning period culminating on the Ninth of Av, when the Temple was sacked.

Fast days are often associated with festivals. The Fast of the First-born comes the day before Passover, the Fast of Esther the day before Purim and the Fast of Gedalia the day after Rosh HaShanah. In the same spirit, we could turn the 16th of Tammuz into a celebration of Diaspora Jewish social activism, the sweetness that we add, against all odds, to the sadness of the exile we’ll mourn tomorrow.

There could be a special synagogue service, a home seder or community mobilization. We’d honor a current-day hero battling uphill for immigrants or abortion rights, the poor, autism. What’s important is to celebrate our engagement in making this country a better place, and honor the heroism of our martyred sons.

Why We Should Honor Slain Civil Rights Workers With Jewish Holiday