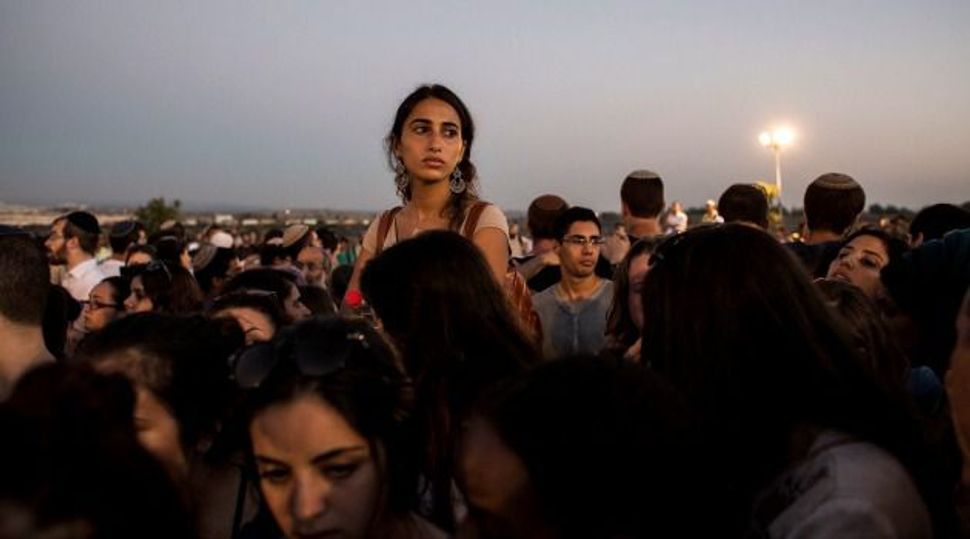 When the city of Modi’in was built in 1993, I don’t think the planners envisioned the scene that took place here today. Tens of thousands of Israelis — nearly the equivalent of Modi’in’s entire population — descended on the modest cemetery at the outskirts of the city to bid a final farewell to the three boys murdered on their way home from school 19 days ago. The families of the three boys — Eyal Yifrach, 19, Gilad Shaer, 16, and Naftali Fraenkel, 16 — were surrounded by masses of Israelis from all over the country, spilling out of the Ben Shemen forest where the cemetery sits, all having come to share their grief and provide mutual comfort.

The crowd was overwhelmingly religious and very young. Teenage girls in skirts and boys wearing knitted yarmulkes dominated the scene. I felt almost old as I searched for other adults in the crowd, a feeling reinforced by the sight of teens wearing youth-movement shirts, a reminder that in Israel, teenagers pretty much run the country. Gilad Shaer’s sister eulogized him by describing how they would plan their youth group activities together. The boys were in some ways still children, and in other ways deeply formed and complex young people.

There were some beautifully touching moments at the cemetery. Before the three processions arrived from their respective towns (Nof Ayalon, Elad and Talmon), the crowd kept breaking into spontaneous singing, like a massive standing kumsitz. As I walked along the forest road, one group of singers faded and another heightened. In between the singing, there were groups praying mincha, the sounds of “Amen” reverberating for a distance because the crowd was so quietly subdued. Young boys were walking through the crowds handing out free bottles of water, though I have no idea who paid for them, or in fact how all of the logistics of this massive event were organized so fast or by whom. And then there were people wearing t-shirts saying “Bring back our boys” and other related slogans, reminding me of how quickly everything moves, and even entire movements form, in this digital age.

As the procession of the cars of the families passed by, my heart tore apart. Images of Eyal Yifrach singing a song he wrote while strumming on his guitar at a recent wedding of a relative, images widely circulated these past few weeks, stuck a chord with me. The boy is the exact same age as my son, Effie, who also plays guitar, and who is currently serving in the army. The similarities in their build, the purity of their smiles, the beauty of the spirit shining out of their eyes, made Eyal’s death particularly piercing for me.

That’s the human condition, I suppose. The more connected we are to another’s circumstance, the more we feel their pain. My life as a mother has permanently altered the way I experience events such as these. My heart aches for the families.

Making my way through the endless stream of people, I kept feeling like I was at some kind of massive protest, reminiscent of Soviet Jewry protests of my youth, when the entire Manhattan felt like it was filled with Jews expressing their deepest passions. People today braved the heat, the traffic and the cramming in order to attend, not out of obligation or rote but because there was simply nowhere else we wanted to be. The entire universe was contained in this space in this moment, a historic moment that we just needed to be witness to, some kind of collective spiritual event.

It was a moment, one that has been building over the past 19 days, of bringing Jews together. As my husband said to me as we walked through the cemetery, “Aren’t the Jewish people amazing? Look at all this love.”

In that sense, I have no doubt that this will end up being a formative experience for the people there, especially the youth. Just as the messages instilled into me at the Soviet Jewry rallies about Jewish peoplehood and connectivity ended up deeply informing my most important life choices for decades to come, the messages instilled on this day will undoubtedly have a cementing impact on the identities of the youth who were there today as well.

I hope that the messages that were internalized are the messages of connectivity, humanity, care and love as core aspects of Jewishness. As Yair Lapid said in his eulogy for Gilad Shaer, this is a time to work on bridging social gaps and remembering the human spirit that connects us. But only time will enable us to see how this story plays out, and how these events will be used and interpreted by those who were witness to it. Our history is being written right now, in the hearts and spirits of Israeli youth.