Why Jewish Revenge Murder Should Shake Us Up 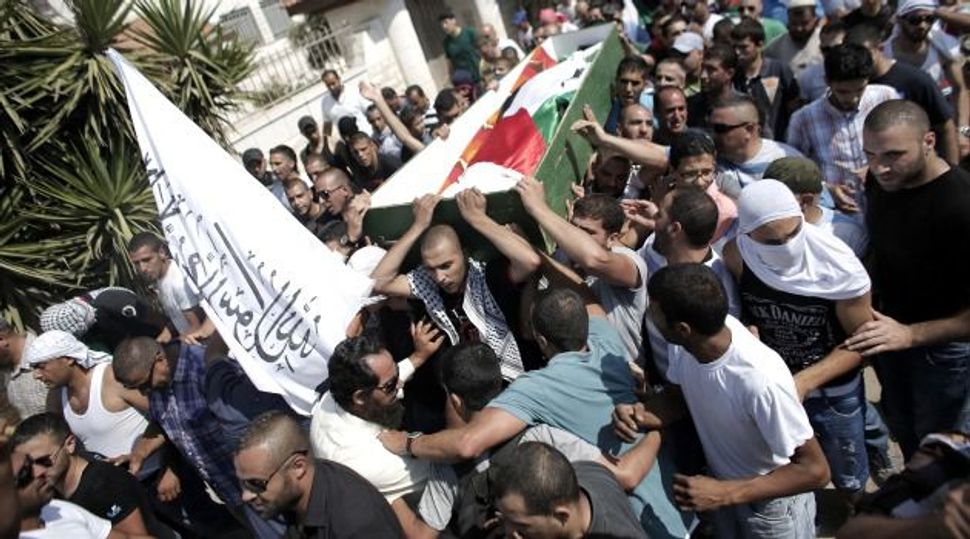 Already, the details emerging about the gruesome death of Mohammed Abu Khdeir, the Palestinian teen burned alive in a revenge attack, are causing soul-searching among Israelis who would not or could not acknowledge that this unforgivable act was perpetrated by some of their own.

We American Jews must do the same.

It is far past time for those of us who love and support the State of Israel not only to acknowledge the suffering of Palestinians under more than four decades of occupation, but to recognize what that occupation also has done to us.

Too many of us have become blind to the Palestinian Other. We rarely encounter them on our trips to Israel. We don’t listen to their lives. Every act of violence against Israelis — and there have been far too many — serve as confirmation of our ingrained prejudices, without any opportunity for another side of their story. And so we absorb a sense of moral superiority that underlies the message beamed our way from decades of Israeli governments, more so now: We don’t act like that. We are better. Israel is different.

I thought about this when hearing yesterday that some American Jews had convinced themselves that Hamas was to blame for Abu Khdeir’s murder, or that it was an “honor killing” in his family. Anything to deflect the horrible truth: That some Jews are capable of grabbing a 16-year-old boy waiting for prayers at a mosque and burning him alive — all supposedly for the sake of Israel.

There are grim precedents to this behavior, of course: Baruch Goldstein, who murdered 29 worshipping Palestinians in Hebron; Yigal Amir, who assassinated Yitzhak Rabin and set back the path to peace for decades. But these incidents are safely locked away in an old reference book, shrouded by time and somehow excused because of the zealotry or mental health of the killer.

The same psychological tyranny may be at work in Abu Khdeir’s killing; as of this writing, six Jewish Israelis have reportedly been arrested, three have confessed, but we don’t know more about their origins or motive. Those quick arrests and the forthright statement of Israeli Prime Minister Benjamin Netanyahu that there was no place “for those kind of murderers in Israeli society” shows that the government is willing to own up to the severity of this crime, and to confront it. That’s welcome.

But there is much deeper work to do, in Israel and for us at home. As David Horowitz wrote this morning in The Times of Israel:

We need to internalize, too, that while we rightly protest the constant incitement against Israel that is tolerated, often encouraged, by the Palestinian leadership, our own house is not in order. It’s heartening to hear politicians and rabbis reaching deep into their lexicons for words of condemnation, but they ring a little hollow against the backdrop of hostility to Arabs displayed so routinely by so many policy-makers and opinion-shapers.

The same can be said in America. It’s touching to read the reams of press releases by leaders and organizations responding to Abu Khdeir’s killing, but a truer test of their intentions will come if they refrain from derogatory language about Palestinians and Arabs from now on.

We can think the worst of the Others when we don’t bother to see them, when every stereotype becomes an abiding truth, when we constantly need to affirm our superiority in part by derogating theirs lives, their culture, their hopes.

Abu Khdeir’s death should disabuse us of those behaviors.

The most heartening story to emerge these last frightful days is about the exchanges between his family and that of Naftali Fraenkel, one of the three Israeli teens abducted and murdered two weeks ago. The Forward’s story has soared to the top of our most-read list online. I’d like to believe that suggests a willingness by American Jews to think differently about Palestinians and our own reactions to their suffering, which can be addressed only when it becomes real.

Why Jewish Revenge Murder Should Shake Us Up