In Tel Aviv, Keep Calm and Mind the Rockets 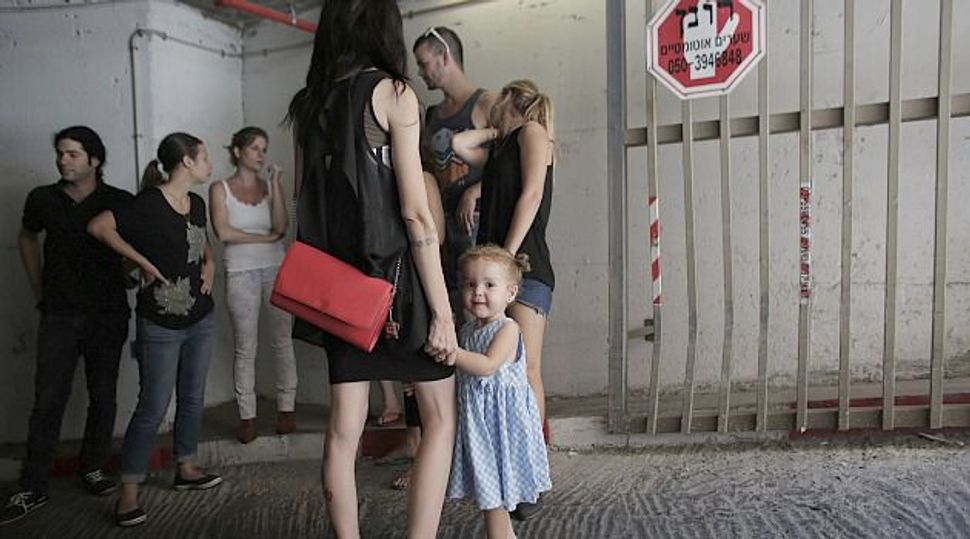 (JTA) — “In Tel Aviv, we expect the skies clear with a temperature of 32 degrees,” our pilot said upon taking off from Milan’s airport Wednesday, with no discernible hint of irony.

The thermometer in Tel Aviv did fill up — 32 degrees Celsius, 90 Fahrenheit — but the skies have, sadly, been far from clear. As the Israel Defense Forces’ Operation Protective Edge in Gaza finishes its second day, Israel’s coastal metropolis has experienced an unprecedented rain of rocket fire.

Enduring rocket attacks used to be the province of Israel’s north and south; Tel Aviv, by contrast, has derisively been called “the bubble,” a central-Israeli city of relaxed beach-goers removed from security threats to Israel.

On the morning of our flight, two rockets headed for Ben-Gurion Airport, also intercepted by Iron Dome. When we descended onto Israel, our plane swooped in a semicircle north of Tel Aviv rather than flying directly over the city, a flight path altered to avoid potential rockets. When we entered the airport, just after the sign bidding us “Welcome to Israel,” another one pointed us to a bomb shelter.

The south has still borne the brunt of Hamas attacks this time around, but the conflict has hit Tel Aviv as never before. Warning sirens sounded across the city, driving residents to seek shelter in their apartments’ stairwells and sleep in their apartments’ fortified rooms.

On social media, Tel Avivis reacted with humor. One posted a 2012 video called “Sh*t Tel Avivians say during an attack.”

Another posted a Facebook status about how impromptu stairwell gatherings gave neighbors a chance to get to know one another. A third asked Facebook friends what bikers should do during a siren: drop the bike and risk its being stolen? Lock it up and waste precious seconds? Or drag it into a stairwell and take up limited space?

As the war rages on and Hamas’ rockets gain an ever-longer range, Tel Aviv can no longer be the oasis from conflict that it had become in recent years. But even as its 400,000 residents lock up their shelters or don their IDF reservist uniforms, Tel Aviv still knows how to carry on in the face of unclear skies. In that sense, it is indeed no different from the rest of the country.

In Tel Aviv, Keep Calm and Mind the Rockets