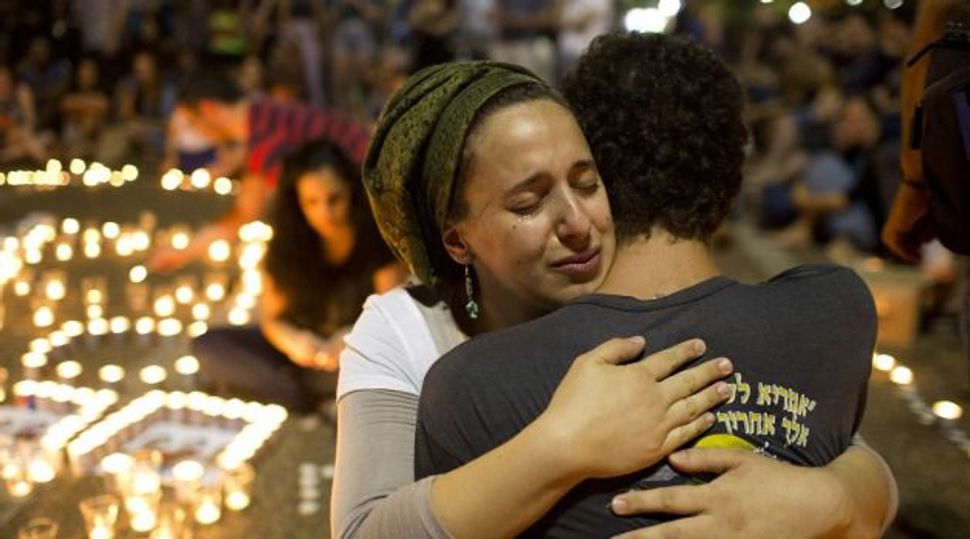 Unity Amid Divisions: Israelis comfort one another after the bodies of three kidnapped teenagers were found. Image by getty images

This is one of those times when the gulf between we American Jews and our Israeli kin seems wider than the ocean. As sirens blare and rockets whoosh through the sky there, we here can only empathize, support and, for those so inclined, pray. We can hope for a speedy end to the attacks and counterattacks, and for the minimum loss of innocent life and property on all sides, but anything else seems, well, unseemly.

This is one of those times when solidarity trumps all.

It helps explain the conclusions of a new study released by the Israel Democracy Institute, conclusions that might otherwise sound contradictory. In a survey of the adult Jewish population of Israel, the IDI found that 60% of the respondents believe that Jews in Israel are a nation separate from Jews in the Diaspora; 36% disagree. But the survey also found that 62% believe that Jews in Israel and the Diaspora share a common fate.

Sixty-six years after the founding of the state, Israeli Jews have developed their own identity, character and personality, forged in a tough neighborhood and shaped by the enormous variety of cultures millions of immigrants have brought to the country. As Tamar Hermann, who conducted the poll, explained, “the ‘New Jew’ is different than the Diasporic Jew.”

But Hermann also said that a constant majority of Israeli Jews over the years insist that they share a common fate with Jews in the Diaspora, and that connection, complicated though it may be, is growing ever deeper. As Israel matures and strengthens, it is better able to reach out to Jews beyond its borders for more than a handout, to genuinely assist American Jews as they face rapid assimilation and European Jews as they confront increasing anti-Semitism.

So while the gap in lived experience cannot be ignored, the belief that our fates are interwined remains as strong as ever.