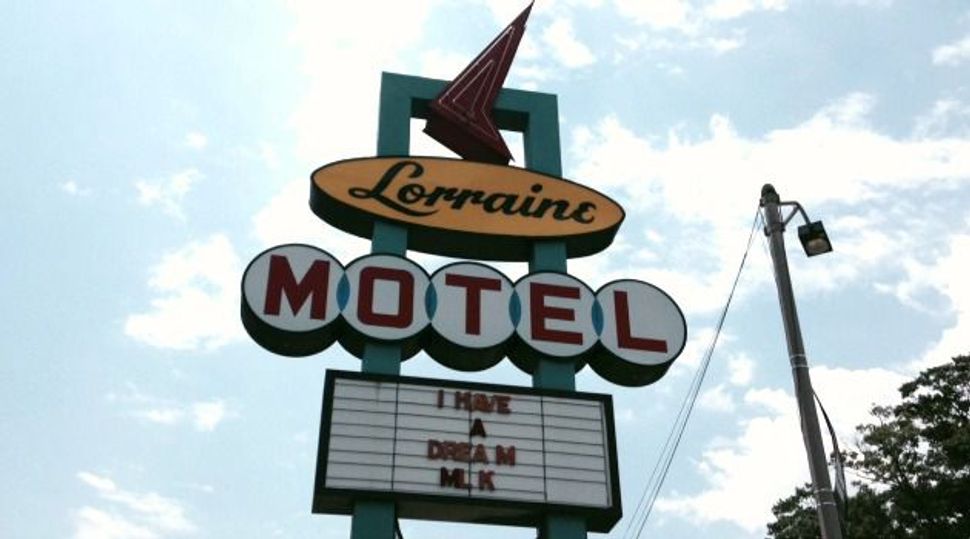 Lorraine Motel in Memphis, where Martin Luther King, Jr. was assassinated in 1968. Image by Anne Cohen

Jews pop up in unexpected places in Memphis, Tennessee. Here are six things that surprised us in the Blues City.

1) Joseph Is Stalking Us

The biblical Joseph is stalking us in the South. We first came across him in Alabama, when we drove through Dothan, a town with a fledgling Jewish community. The town’s name comes from a verse in the Torah: When Joseph goes out to check on his shepherd brothers, he’s told that they’ve gone to Dothan. When he gets there, the brothers — jealous of him for being the family favorite — sell him into slavery. We have no idea why the early settlers of Alabama thought it would be a good idea to name their town after this obscure biblical hamlet — but the choice of name is painfully ironic: it references a story about slavery, and we all know what part Alabama played in that dark chapter of history.

Joseph showed up again in Memphis on our visit to the Lorraine Motel, where Martin Luther King, Jr. was assassinated in 1968. A plaque marking the spot quotes that exact same Joseph story: “They said one to another, ‘Behold, here cometh the dreamer. Let us slay him and we shall see what will become of his dream.’”

The Lorraine Motel is now part of the National Civil Rights Museum, which traces the struggle of African Americans from slavery to civil rights. Jewish references are everywhere. Take the rabbi who visited Parchman Prison in Mississippi to counsel the Freedom Riders incarcerated there. When the warden warned him not to give the prisoners any information about what was happening in the outside world, he replied, “You mean, I can’t tell them that Roger Maris just hit his 62nd home run?” When the warden said no, the rabbi kept up the back-and-forth, listing more and more things that he couldn’t say — all within hearing distance of the prisoners. How Talmudic.

Walking into the Freedom Summer exhibit is like flipping through a Jewish summer camp photo album. Many of the white college kids who came down to Mississippi to help register black voters in 1964 were Northern Jews — and it shows. Three famous faces stand out: Andrew Goodman and Michael Schwerner, two Jewish volunteers, were brutally lynched by the Ku Klux Klan along with James Chaney, a black activist from Mississippi.

When traveling through the South, you can expect to see a lot of preachers on TV. What you don’t expect is a bearded messianic rabbi standing behind a giant menorah, wearing a kippah and a tallit emblazoned with mega Stars of David, expounding on the benefits of Jesus Christ, our Lord and Savior. And yet, that is what we found when we turned on the TV in our Memphis hotel. On his show “Discovering the Jewish Jesus,” Rabbi Kirt Schneider provided biblical exegesis on everything from Luke to “Yehoshua.” He’s the sort of man who, instead of pronouncing God’s name “Adonai,” will scream out “YAHWEH!”

It may no longer hold the title of largest Orthodox synagogue in America, but Baron Hirsch looms large in East Memphis suburbia — both spiritually and physically. As the executive director gave us a tour of the building, his voice echoed in the halls. The congregation, which celebrated its 150th anniversary last year, welcomes up to 1000 people on High Holidays. The shul encapsulates some of the contradictions of the Jewish South: it’s packed with Artscroll siddurs and sends a large delegation to the AIPAC policy conference every year, and yet many congregants drive there for Shabbat services. A flyer on the bulletin board announced that the congregation aims to raise $10 million to support Israel’s operation against Hamas, reflecting the nearly monolithic Zionist feeling that permeates Southern Jewry.

The shul’s history mirrors that of the community it serves. Its first home was in downtown Memphis. Increasing wealth and growing membership pushed it out first to Midtown in the 1950s and then out to the suburbs. By the 1980s, the community had settled in lush East Memphis. (Think Teaneck, New Jersey — but with more Ionic columns.)

Cool factoid: When the congregation moved to the suburbs, they set up shul in a trailer before buying and moving into singer Isaac Hayes’ house for a brief period after he declared bankruptcy.

Wealthy Jewish real estate mogul Jack Belz has two passions in life: Asian art and Judaica. His Memphis museum combines those interests. In addition to hosting the largest collection of Chinese art in the region, the Belz Museum of Asian and Judaic Art boasts contemporary Israeli artists like Ofra Friedland and Daniel Kafri. Oh yeah, and it also has a few Chagalls.

Before he was accused of sexual harassment, San Diego mayor Bib Filner fought for equality. That’s what we learned in the National Civil Rights Museum, which informed us that as a Cornell student, young Filner was struck by the violent images coming out of the South. Feeling compelled to do his part, he embarked on a Freedom Ride in 1961. He was arrested in Mississippi and spent two months in Parchman. In 1965, he marched in Selma. In 2013, he resigned in disgrace.