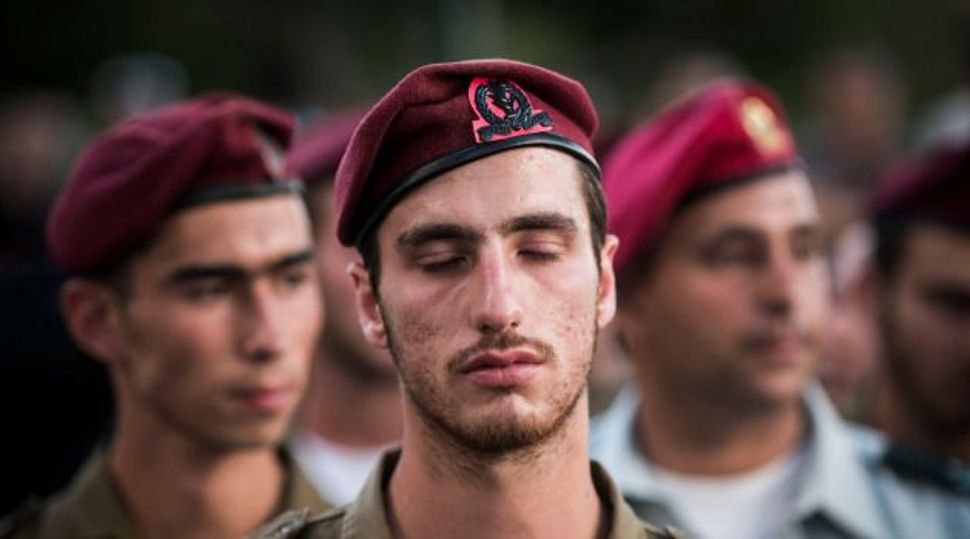 I visited Israel at the end of June, after the three yeshiva students were kidnapped but before their bodies were found, before the Palestinian teen was murdered in a revenge attack, before the air strikes and the ground war and the horrific death toll in Gaza. Before it all fell apart.

As glum as the situation was even then, in that momentary stasis, I was occasionally offered a glimpse of a way forward. I remember sitting across a small table from Khalil Shikaki, director of the Palestinian Center for Policy and Survey Research in Ramallah, who understands his public’s opinion as well as anyone. He outlined why the reconciliation agreement between Hamas and Fatah — not a unity government but a political agreement, “a marriage of convenience” as he called it — could actually benefit a peace process that had gone dormant.

The Palestinian Authority in general, and especially its President Mahmoud Abbas, gained in popularity when the agreement was announced, Shikaki said. Abbas was positioning himself for elections he hoped to win, thereby removing Hamas from governing Gaza and satisfying a Palestinian desire for unity while allying Israeli claims that peace wasn’t possible as long as Hamas was in power. Besides, he noted, the public doesn’t want another intifada.

This more generous view of Palestinian maneuvering was not shared by the Israeli government, which condemned the agreement outright. But it was reflected in the United States’s tepid, tentative approval of the reconciliation pact, and sitting there in a quiet office, across from a knowledgeable and distinguished academic, I could almost imagine it leading somewhere positive.

But even then, the signs were ominous. Already, five Palestinians had been killed in the Israeli hunt for the kidnapped teens, and emotions were turning raw. Israelis were on edge as rockets continued to fly in from Gaza.

“Diplomacy has failed both Israelis and Palestinians,” Shikaki said ruefully. The kidnapping could lead to “greater anarchy and perhaps violence.”

Do you see any diplomatic opportunities, I asked him? He took a deep breath.

I fear that we are witnessing the end of politics in the Israeli-Palestinian conflict. By politics I mean the process by which individuals or groups or nations resolve conflicts through words and compromise, and do not resort to violence of the sort that afflicted the region during two intifidas and decades of occupation I see no possibility for resolution right now. I look into the future and see only a void.

This is a new and frightening outlook for me, and I suspect for many American Jews who have believed that, somehow, the two parties would figure out how to live side-by-side if not together, and come to some agreement that would grant Palestinians a sovereign and viable state while guaranteeing Israel’s security and retaining its democratic character.

I am sure that there are hardliners who feel a certain vindication. This is what we have argued all along, they might say. There is no Palestinian partner for peace. Hamas wants only Israel’s destruction, and is cynically willing to sacrifice hundreds of Palestinian lives for that impossible goal. Israel withdrew from Gaza and has received only rockets in return, so further territorial compromise is a non-starter.

As Hamas grew more recalcitrant in the last month, spurning ceasefire offers and all but inviting a ground invasion, the hard-line argument has sounded more convincing. Where once I thought that Hamas would moderate its behavior if brought into the fold, now I’m less certain. Reason dictates that violence and terror have gotten the Palestinians no closer to statehood in four decades. But maybe reason is not operative here.

This is why political leaders who reject a two-state solution are gaining traction, in Israel and I would guess, among some American Jews. I spoke to two of the most prominent of those leaders when I was last in Israel — Dani Dayan, head of The Yesha Council, which represents settlers, and Naftali Bennett, economic minister and head of the Jewish Home party. Both support some sort of unilateral annexation of West Bank land populated by settlers, and envision a Palestinian state perhaps far in the future (Dayan) or not at all (Bennett.)

I find this proposal deeply offensive, as it codifies Jewish settlements that the entire world deems illegal (and rightly so) while denying Palestinians a chance at genuine sovereignty. But never mind my personal views. This sort of unilateral action bypasses negotiation and therefore rejects a political compromise and resolves nothing. It can’t be sustained in the long-term, or even in the short-term. Its proponents are, frankly, delusional that this will somehow end the conflict.

It still leaves me staring into a void.

What else? The Israeli air strikes on Gaza, and even the ground invasion, are legitimate acts of self-defense, and we mourn the soldiers who have lost their lives or forever injured their bodies defending their homeland. But we can’t — I can’t — ignore the death and suffering imposed on innocent Gazans, either. They were put in harm’s way by their cynical leaders, true, but Israel also shoulders some responsibility for the decimation of entire families, of too many young children, of homes and livelihoods and futures.

And please don’t tell me that this is the unfortunate collateral damage from a war waged by the most moral army in the world. I respect the rules of engagement followed by the Israel Defense Forces and the attempts to warn civilians and pinpoint the bad guys. It’s far more than Hamas does when it lobs missiles into populated areas inside Israel proper or, as it has in the past, blown up innocent people on buses and in restaurants.

But if you wage war, you have to own the consequences. We who support Israel in this endeavor have to own it, too. We have to accept that too many innocent lives have been lost, and recognize the lasting damage such destruction leaves in its wake — a generation that will likely be fueled by more hatred and distrust.

We don’t yet know whether this war will have been worth the steep and terrible cost it has exacted. And it still begs the question: What next?

A few observers still argue for a scenario where Abbas will emerge stronger and will be able to negotiate on behalf of all Palestinians. But numerous stories published since the U.S.-brokered peace talks collapsed, especially this brilliant piece in The New Republic, suggest that he and Israeli Prime Minister Benjamin Netanyahu share not a shred of trust in one another.

Besides, Netanyahu does not sound like a man willing to negotiate anymore. David Horowitz, editor of The Times of Israel, reported on July 13 that Netanyahu, in an unusual Hebrew-only press conference, stepped away from his support of a two-state solution. “He made explicitly clear that he could never, ever countenance a fully sovereign Palestinian state in the West Bank,” Horowitz wrote. (Emphasis his.)

Then what? When the hostilities with Hamas finally end and if there are still moderate Palestinians standing, they will pursue a route of aggressive non-violence that already angers the Israeli government: seeking international legitimacy at the United Nations and promoting economic and diplomatic isolation of Israel. “The main point is you want to neutralize the huge military power of the opponent by engaging the opponent in the legal arena,” was the way Husam S. Zomlot, the executive deputy commissioner of the Fatah Commission for International Relations, explained the strategy.

So the Palestinians have a way forward. It may be a feint. It may disguise their fundamental reluctance to come to terms with Israel’s continued existence and the difficult compromises that demands. But it is a plan.

I still believe that a binational state will signal the end of the Zionist dream; I do not see how an Israel that officially absorbs hundreds of thousands of Palestinians can retain both its Jewish and democratic character. That is why a two-state solution, though undeniably risky, was and is the very best alternative.

But it is slipping from view. And nothing has emerged to take its place.