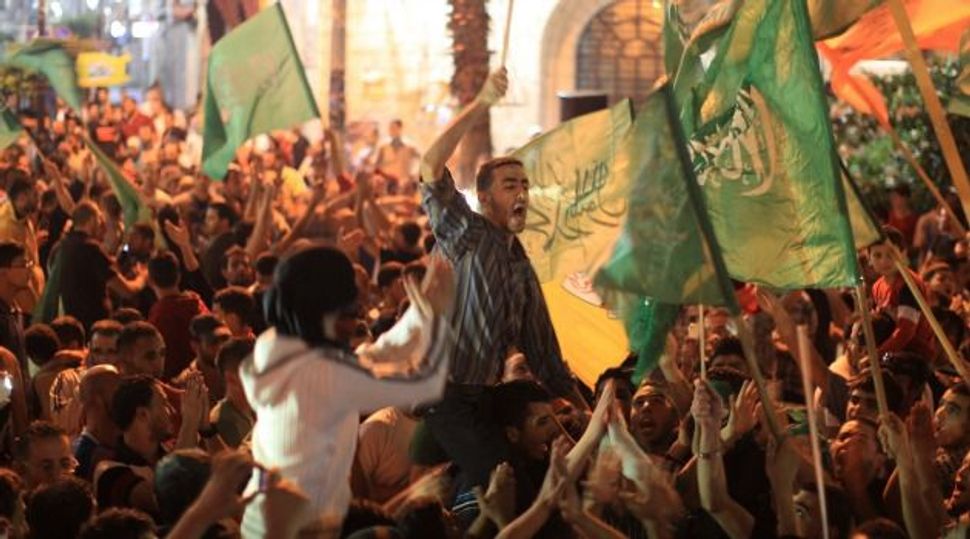 Immediately after a Hamas military spokesperson announced the capture of an Israeli soldier this Sunday, the streets of Gaza, Hebron, Ramallah and Bethlehem erupted in fireworks and celebration. Israel confirmed this week that the body of, Oron Shaul, a soldier presumably killed when an armored vehicle was hit by an anti-tank missile, went missing.

If Hamas has the body they are likely to demand the release of prisoners in exchange for the body. In 2008, Israel released five Lebanese prisoners, including notorious murderer Samir Kuntar, for the corpses of two Israeli soldiers.

But rewarding terrorists by releasing prisoners in exchange for the body will only embolden Hamas and incentivize more kidnapping attempts and lead to more terrorism.

In fact, over 51 of the 1,027 terrorists released in 2011 in exchange for Israeli soldier Gilad Shalid, were recently re-arrested in connection with the abduction and murder of three innocent civilian teenagers, which set-off the current conflict.

Not only are several Shalit swap terrorists possible suspects in the teen kidnappings that sparked this current conflict, last April, on the way to a Passover Seder, Israel Police Chief Superintendent Baruch Mizrahi, was murdered near Hebron. A terrorist released in the Shalit swap was arrested for that murder too.

Israel’s uncompromising value for life, and respect for proper burial, has lead it to free terrorists in exchange for soldiers, both dead and alive — but at what cost?

As we see, the elaborate tunnels built by Hamas to infiltrate Israel are part of Hamas’s crucial strategy to abduct Israelis. The Israeli military has recently found kidnapping paraphernalia in those tunnels, including tranquilizers and handcuffs, demonstrating the intent to abduct more Israelis.

The United States made the same mistake when it released five high-ranking terrorists, including the Taliban deputy minister of intelligence and Taliban army chief of staff, from Guantanamo in exchange for the release of Sgt. Bowe Bergdahl, who was held captive.

Israel should not let captives languish or corpses rot. It should do everything in its power to recover people and bodies. Jewish law places a premium on pidyon shvuyim, “the redemption of captives,” and proper burial. But not when the price will lead to more death and more kidnappings.

The author has written on the Israeli-Palestinian conflict for USA Today. He writes extensively on religion, culture, business and law. Follow him on Twitter @EliFederman.