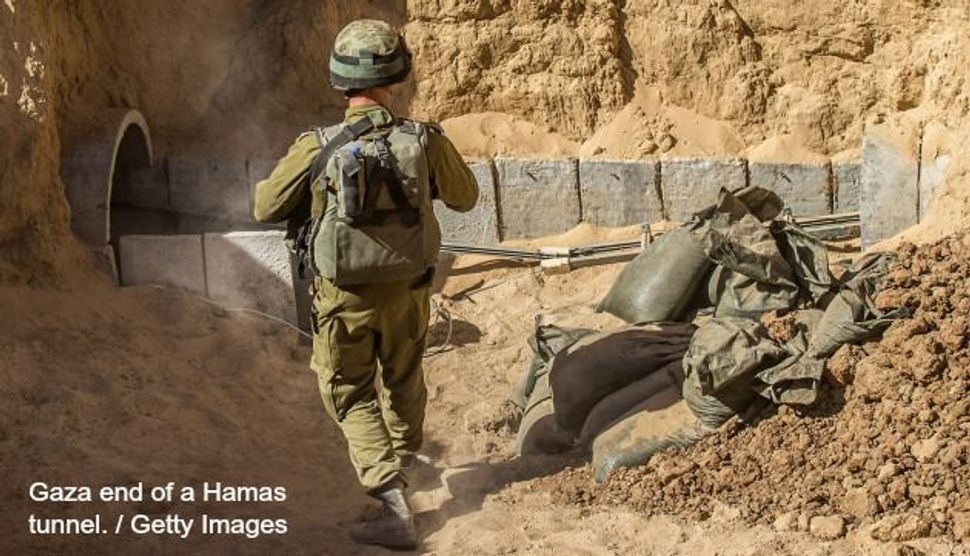 In my last post I promised to translate Alex Fishman’s Friday column in Yediot Ahronot discussing Hamas’s tunnels. Here it is.

He briefly traces Israel’s growing awareness of the problem over more than a decade. He reaches much the same conclusion as Nahum Barnea: “…the fact is that everyone saw, everyone knew, everyone understood, and yet the test of results ended in failure…”

There’s a lively debate right now in the Hebrew press over whether or not Israel realized the full extent of the threat. That is, given that the threat’s existence was long known, is there any truth to the claim that Israel was “surprised”? I’ve got some links below to follow the debate if your Hebrew is up to it. It can’t be understated how misleading the English-language reporting on the topic has been; more on that below, after the translation.

Both Barnea and Fishman conclude, as my translations show, that the IDF and government knew enough to grasp the full dimensions of the threat, if not the details of every tunnel, long before this operation. Whether or not they’re right will be determined soon enough, as Harel writes. I generally read Barnea and Fishman first because they’re commonly described as the best informed, best connected and smartest in the field in Israel — Barnea in political analysis, Fishman in reporting from inside the mind of the military. Unfortunately, Yediot doesn’t publish on line — its Ynet site is a fully separate publication — and doesn’t translate its print material into English. My translations are as literal as I can make them.

I’ve often heard friends and readers in the last few weeks expressing bewilderment that the IDF had such a hard time finding technology to locate tunnels or detect excavation in real time. Fishman wrote about that a few weeks ago. His basic thrust was that normal sensor equipment is only effective down to about 10 meters, and Hamas attack tunnels are around 25 meters down. And the sophisticated equipment used for oil and gas exploration is too sensitive for concrete structures just 25 meters down — they’re looking for tiny signals from miles down, and closer to the surface they tend to go off whenever a truck goes by.

On Wednesday this week the defense minister returned to the Gaza Strip to examine the destruction of the tunnels. When he was at the headquarters of the division in charge of cleaning out Seja’iyeh, fire opened up from the windows of Wafa Hospital, whose patients had been evacuated at the beginning of the week after Israel’s Coordinator of Government Activities in the Territories directly approached the hospital director and asked him to leave. Since then the place had been officially converted into a forward position of the Izz a-Din al-Qassem Brigades.

The defense minister immediately authorized the destruction of the building, and an air force plane eliminated it. The secondary explosions that were heard long after the bombing made clear that the hospital had been serving not only as a firing position but as a storehouse for rockets. The patients were lying directly above huge quantities of explosives.

By the middle of this week the army had destroyed most of the tunnel exits on the Israeli side and near it. The problem is destroying the tunnels along their full length. It turns out that Hamas built the tunnels in a cluster pattern. Each one of the terrorist organization’s six brigades was given responsibility for tunneling in its sector and dug tunnels, one alongside the other, in pairs or threes. Channels were dug between the tunnels to connect them. Each tunnel had a number of exits, to permit the scattering of the forces that emerged from them. Hamas’s tunnel planner took account of the fact that there are communities and military camps scattered around the Israeli side of the Gaza border, and tried to concentrate the tunnel cluster in the direction of strategic locations. Thus when an order was given, the men would be able to break out simultaneously through numerous shafts and scatter across a broad sector of Israeli territory. If one tunnel collapsed or was exposed they could simply cross over to the next. From their point of view it was a project of genuinely national scale. For the purpose of breakout Hamas trained select forces, since it required descending to a depth of up to 25 meters [80 feet or about 7 or 8 stories — jjg] and movement along hundreds of meters, up to a kilometer [0.6 of a mile], carrying a full load of equipment that’s reminiscent of IDF equipment, and with very little oxygen. At each opening a storeroom was prepared with combat equipment for a combat unit consisting of 15 to 17 men at every invasion point.

In the 2007 annual report of the State Comptroller [Israel’s national government inspector general — jjg], the army itself is quoted speaking about the danger of the attack tunnels. Between 2001 and 2004, 14 soldiers were killed as a result of activity that emerged from the tunnels, whether the blowing up a military installation, encounters with terrorists emerging from tunnel shafts or in the course of activity to locate them. The military personnel who say that everyone knew about the danger are correct. The defense minister, too, relates that just in the last year we have attacked four tunnels, and that during the current activity intelligence personnel are leading the forces directly to the tunnel mouths. The infiltrations into Israeli territory carried out during Operation Protective Edge have been interdicted, some at the cost of soldiers’ lives, and have not ultimately reached any communities or military installations.

And still, the fact is that everyone saw, everyone knew, everyone understood, and yet the test of results ended in failure. Miraculously, Hamas’s combat doctrine did not speak of fighters emerging simultaneously from all the tunnels in the first stage of a campaign, but preferred the use of medium- and long-range rockets as the opening strike. It’s true that the line in the IDF Southern Command was on the alert in the last few months for a scenario of breaking out of tunnels, but it’s doubtful whether it would have been possible to prevent all the incidents of bloodshed or kidnapping.

The preparations that Hamas undertook in the area of tunneling, rocket production, smuggling military equipment, training forces and strengthening their endurance all point to one clear conclusion: this is not an army of barefoot hooligans. There is planning, command, technology and doctrine. It’s possible to tip one’s hat to their professionalism for a moment, before going in and demolishing their national projects.

Shai Gal at Mako-Channel 2 runs through a 20-year history of failed efforts to find a technological solution and debates over whether it really mattered. Yoav Zeitun at Ynet details some proposed solutions developed and scrapped over the years. This piece by Doron Nahum at Nana-Channel 10, from November 2013, describes the mounting alarm inside the IDF over the scope of the problem, culminating in a decision to send soldiers out on foot patrols to look for whatever they could find.

This piece by Pazit Ravina in Maariv puts the blame on former (2005-07) IDF chief of staff Dan Halutz, who she says bulked up the air force budget at the expense of tunnel research. It’s one of several claiming solutions could have been found given enough effort and money; blame is variously placed on the IDF or Treasury. Haaretz’s Amos Harel, writing (in English!) last Monday, says regardless of whether the IDF was fully aware of the problem’s scope, it knew enough and the failure to resolve earlier is about to become a major national scandal.

As for English-language reporting on the issue, nothing captures the insipid quality more vividly than an exchange yesterday on the revered PBS News Hour. Anchor Gwen Ifill started it off with a question to a Washington pundit, opening with the observation that Israel regards the tunnels as a strategic threat while Hamas considers them an economic lifeline. She’s talking about two entirely distinct and dissimilar sets of tunnels. The ones leading south into the Sinai city of Rafah were the economic lifeline. They’ve been demolished by Egypt, which was able to locate them on its side of the border because the openings were cargo loading and unloading zones. The ones leading east into Israel are entirely useless as economic channels, leading only to empty fields near Israeli villages and IDF installations. They’re entirely military in nature. Israel can’t easily find them on its side of the fence because they’re not opened until an attack is mounted. Hence the technology dilemma.