Gaza War Diary: Silence, Then the Bombs Go Off 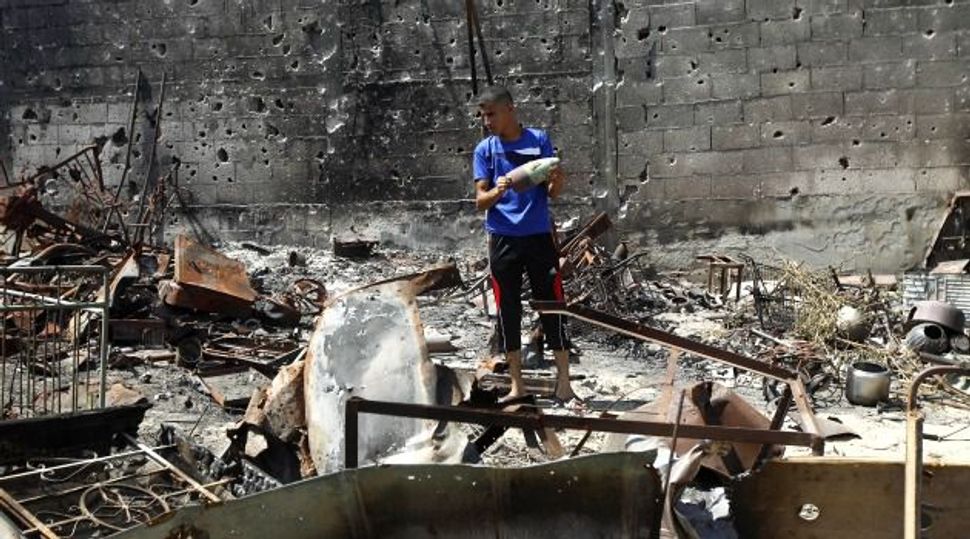 Editor’s Note: Walid Abuzaid’s diary will run in two parts. This is the first installment.

I was in Cyprus when it all started. When we heard about the kidnapped teens, we were thrilled by the possibility of another prisoner release. Hamas would be held responsible for the kidnapping, but we treat our prisoners well — at least the one prisoner we’ve ever had.

It’s my last night in Cyprus and one of so few in which I smile before I go to bed, for tomorrow I’m on my way home. I know it isn’t the smartest decision I’ve ever made, but I miss Gaza. I miss my life.

“I don’t want to f**king go to Cairo, I want to go to Gaza. How many times do I have to tell you? Do you want me to say it slower?!” I yell at the woman at the gate who takes my passport and makes me watch every passenger get on that plane until the gate closes. “Wait here, please,” she says for the 10th time, before whining about Arabs in Turkish to the lady next to her, who lends me her seat while I wait. An airline employee official who speaks Arabic finally arrives. She hasn’t come for me, but rather for the Yemenite whose Saudi residency has expired. He isn’t allowed to go to Cairo either; nor does he want to.

For three days I’m being prevented from traveling to Cairo from the Istanbul Airport, since Rafah crossing isn’t open until Sunday. I try explaining that I do not want to enter Cairo, and that I agree to be held in that disgusting deportation hall in the Cairo airport until the border opens. Yet, nothing I say changes the officials’ minds. In Arabic, “How do you even know Rafah will be open?” the translator dares to ask me. I refuse to even glance at him and continue to scream in English at the cold officials. It’ll be three days of this.

A Palestinian girl waits for permission to cross into Egypt at the Rafah crossing in the Gaza Strip.

I’m finally home, after my dad spent a lot of money to buy me another plane ticket on a different airline. I only had 30 euros for the way back; that’s what was left from the 250 euros that my uncle sent from Germany.

My bag is still in Cairo, but who cares — I’m home. I’ll go to my other uncle, the lawyer, and have him write a contract that will allow my relative in Egypt, Mohammed, to collect my bag for me. Then I’ll go to the bar association to make it all official, before sending the papers through DHL and waiting a week for them to arrive. After that, Mohammed may have to wait a few hours at the airport until he receives my bag. Following that, all that’s left is to wait for the border to open again. Simple!

This isn’t even what I intended to write about, god damn it.

I’m getting ready to embrace my mom, after not seeing her for almost a year. “Wasim, we’re f**ked; they’ve just found the bodies of the three Israelis. Don’t tell mom.” My younger brother, of course, decides to use that as an excuse to tell Mom that I’m still not in Gaza in order to surprise her when I get to her home. Wasim is like that. He arrived from Indiana just a couple of days before I did. He was there on a year-long youth exchange and study program — the same one I did in 2012. We call it a taste of freedom.

My mother cries all through the night, a sense of déjà vu overwhelms me as I recall the night of Nov. 11, 2013.

Back at my dad’s, home, we discuss the repercussions. My father and I don’t usually agree, but this time we both know something bad is going to happen. He asks my stepmother, Nirmeen, for the grocery list. She points out that she has already evaluated the situation and the list will be longer than a week. Lamar, my younger sister, comes along for one last ride before she has to stay in an apartment for an unknown length of time. She understands. She remembers October 2012, she was three years old then.

We are in the living room with an incredible view. We can see Gaza’s entire harbor. I try to cover two-year-old Eimar’s ears when a rocket drops and destroys a mini yacht called “Gaza’s Arc.” She can’t sleep yet; she’s scared. She likes the fire though. She laughs.

My dad and I go out for the first time in five days to get rgag, a kind of bread made in a saj oven, for the delicious Fatteh dish. It’s 5:22 p.m., the electricity’s been out for three hours. It’s the usual eight-hour rounds and the batteries are almost out. The windows of the house are open and the sweet wind is blowing in. I can hear the jets, drones, gunboats and the occasional thud. Eimar is still awake.

I’ve just finished eating and I’m heading to my room for a long-awaited smoke or two. My mind is rushing with thoughts of the Brazil vs. Netherlands match. I saw a photo of Neymar with the rest of the team earlier today. I hope Brazil saves some face and wins the game — that would cheer up my Brazilian friend Pedro a bit. I’ve been to Amsterdam, and have friends there too, so I also want the Netherlands to win. Oh well. I’ll go on Facebook before I start looking for a good online stream of the match, one that can tolerate my agonizingly slow Internet speed.

“You still want to go donate blood?” Wasim asks sarcastically. I don’t indulge him this time. A couple of minutes later my mom calls. She succeeds in convincing me not to go out tonight. I haven’t moved from my place yet. I’ve smoked four cigarettes so far. It’s 8:58 p.m.

My dad asks me to take the car keys to the guard tower so he can park it in the underground garage. A chance to buy more cigarettes, I tell myself. I’m dreading the fact that I have to walk rather than “borrow” the car to drive to the market, since, like last night, Abu-Malek has closed up his shop. I don’t blame him. Tonight will be a particularly loud one, and I’m rehearsing the lies I have to tell Eimar.

As Wasim so elegantly put it in a Facebook post, “Everything around me turns orange, then a second of silence, then a bomb goes off! I can wrap it all up in one sentence, but I can never make you feel it.” As Wasim, who sleeps in the bed under the window, rushes toward me for cover, I run to the window. I’m curious like that. Wasim and I can feel the heat. His leg sustained second-degree burns in 2008, though now he is just shaking.

They bombed Ansar, a nearby cluster of Hamas government buildings. I doubt they had any rockets there, since they are surrounded by four residential towers that allow people to see everything that moves there. I find it hard to believe that we would miss the transport of rockets in or out. The attack was to be expected anyway. My dad is relieved — he now expects quieter nights since there are no more suspicious targets around us. I disagree.

We are watching the World Cup final in the Gaza Hotel’s reception area. It is 30 meters away from our tower, they have a better Internet connection. We’re close friends with the family who owns the place, especially Madj, the owner’s son. They don’t have anyone staying in the hotel anyway; they rarely ever do.

No one celebrates Germany’s win. Gaza is occupied with a match of its own.

As soon as my dad and I drive though the garage door, we’re startled by another ear-splitting explosion. We stare at each other for three seconds, both of us thinking the same thing: that was close. We no longer discuss the not-so-loud ones anymore. We rush, we don’t stop. The streets are empty, like in one of those zombie movies. I think of Will Smith and giggle inside.

When the electricity finally returns and the elevator is working, we go downstairs. Abu-Malek is open tonight. We share a couple smokes and laughs with a friend of mine from high school, Mohammed, and his brother, Ramadan. Our minds can no longer stand the house arrest we’re in; we cannot be forced into depression. They haven’t occupied our smiles…yet. Mohamed and Ramadan live in Beit Lahiya in the north of the Strip, but they came to Gaza City with the entire family because it’s safer. Or so they think. They’re in an apartment two blocks away now, and I bet they miss their beautiful garden. Only three kids are playing in the garage of the opposite tower. Usually I can’t count those noisy rascals, but they’re quiet tonight.

Wasim and I watch the helicopters from the window while they bombard residential towers. We see a yellowish flash from what seems to be nowhere in the bright, night sky, directing us to where we should expect it. Then the notorious red-flamed explosion is accompanied by a thunder-like roar that makes us duck, even though we know it’s far away. I think it’s just a reflex, but hell, you can never be safe enough.

I’ve been up since 6 a.m., the electricity was down from 7 a.m to 3:30. The gunboats and helicopters kept me up as they roared through the night. I just read that four children, none of them older than 11, were killed on a near beach. They were all members of the Baker family. Ahed Atif Baker (10) Zakaria Ahed Baker (10) Mohamed Ramiz Baker (11) Ismael Mohamed Baker (9). What kind of target were they?

I am representing myself, Walid, and myself only. I am not affiliated with any political or religious movement. I am among the few who, when Egypt chooses to be merciful, can leave Gaza occasionally. I am among the lucky few. I will choose to come back to Gaza over and over again, in times of peace and most certainly in times of war. I am helpless, a statistical number to many, a hashtag perhaps, another Gazan, another Palestinian. I am a son, a step-son, a brother, a cousin, a friend, a dreamer, a lover, a fighter. I support the resistance, I am part of the resistance, equipped with a couple thousand words in a war of history books.

But, this is non-fiction.

This piece first appeared in +972 Magazine.

Gaza War Diary: Silence, Then the Bombs Go Off