Why No Photos of Hamas Militants? 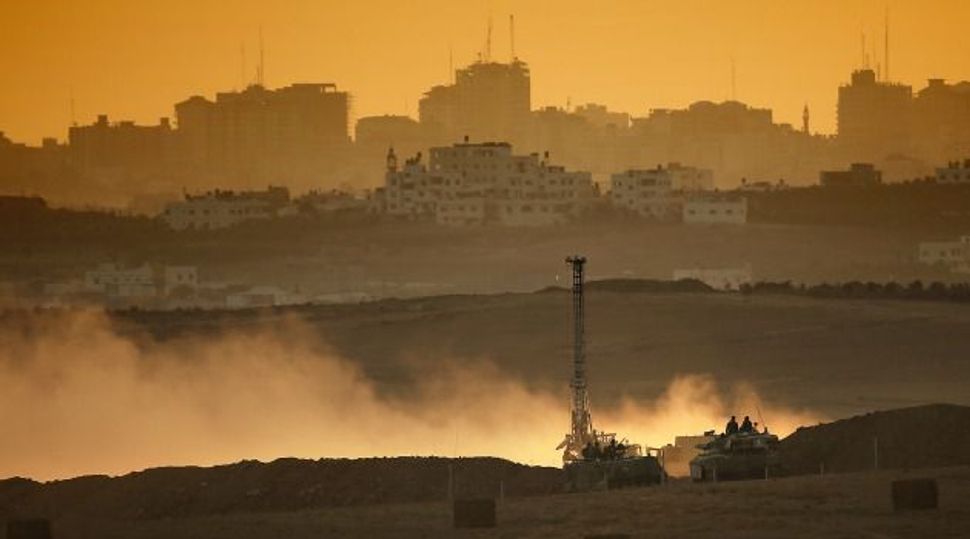 (JTA) — There’s no shortage of images from the Gaza conflict.

What we haven’t seen are practically any images of Hamas fighters inside Gaza.

We know they’re there: Someone’s got to be launching those rockets into Israel (more than 2,800) and firing at invading Israeli troops. But so far the only images we’ve seen (or even heard about) are the Israel Defense Forces’ videos of Hamas fighters using hospitals, ambulances, mosques and schools (and tunnels) to launch attacks against Israeli targets or ferry arms around Gaza.

Why haven’t we seen journalists’ photographs of Hamas fighters inside Gaza?

We know Hamas doesn’t want the world to see images of Palestinian fighters launching rockets or using civilian havens like hospitals as bases of operation. But if we’re able to see images from both sides of practically every other war — in Syria, in Ukraine, in Iraq — why is Gaza an exception?

If journalists are being threatened and intimidated when they try to document Hamas activity in Gaza, their news outlets should be out front saying so. They’re not.

On Tuesday, The New York Times published an account by photographer Sergey Ponomarev on what his days are like in Gaza. Here’s what Ponomarev said:

It was a war routine. You leave early in the morning to see the houses destroyed the night before. Then you go to funerals, then to the hospital because more injured people arrive, and in the evening you go back to see more destroyed houses. It was the same thing every day, just switching between Rafah and Khan Younis.

Are there attempts to document Hamas activity?

If you’re wondering whether the Times has assigned another photographer to cover this aspect of the story, so am I: The Times hasn’t been running photos of Hamas fighters in Gaza — period. Looking through the Times’ most recent three slideshows on the conflict (here, here and here), encompassing 37 images, there’s not a single one of a Hamas fighter.

Our photo editor went through all of our pictures recently and out of many hundreds, she found 2 very distant poor quality images that were captioned Hamas fighters by our photographer on the ground. It is very difficult to identify Hamas because they don’t have uniforms or any visible insignia; our photographer hasn’t even seen anyone carrying a gun.

In an L.A. Times slideshow of more than 75 photographs from the conflict, there’s not a single image of a Hamas fighter either, according to the Committee for Accuracy in Middle East Reporting in America.

For many viewers, the narrative of this war must appear quite straightforward: Powerful Israel is bombarding defenseless Palestinians. That’s understandable when there are hardly any photographs of Palestinian aggressors.

In a July 15 Washington Post story by William Booth, Hamas’ use of Al-Shifa Hospital in Gaza City as an operating base is mentioned — but only in half a sentence in the story’s eighth paragraph.

The minister was turned away before he reached the hospital, which has become a de facto headquarters for Hamas leaders, who can be seen in the hallways and offices. As Tablet noted, that’s called burying the lede.

Likewise, a Palestinian news agency reported this week that Hamas executed dozens of Palestinians suspected of collaborating with Israel last week. JTA reported this, but it got no mention in mainstream media outlets.

Either reporters and editors are uninterested in telling the side of the story that shows what Hamas is doing in Gaza or they’re unable. Let’s consider that latter possibility . Much has been made by Israel supporters of a decision by The Wall Street Journal’s Nick Casey to delete a tweet about how Hamas uses Shifa Hospital as a base of operations.

Presumably, Casey deleted the tweet because of threats by Hamas either to his person or his ability to continue to cover the conflict.

A Times of Israel report earlier this week suggested as much:

Several Western journalists currently working in Gaza have been harassed and threatened by Hamas for documenting cases of the terrorist group’s involvement of civilians in warfare against Israel, Israeli officials said, expressing outrage that some in the international media apparently allow themselves to be intimidated and do not report on such incidents.

The Times of Israel confirmed several incidents in which journalists were questioned and threatened. These included cases involving photographers who had taken pictures of Hamas operatives in compromising circumstances — gunmen preparing to shoot rockets from within civilian structures, and/or fighting in civilian clothing — and who were then approached by Hamas men, bullied and had their equipment taken away. Another case involving a French reporter was initially reported by the journalist involved, but the account was subsequently removed from the Internet.

After leaving Gaza, freelance Italian journalist Gabriele Barbati, in a pair of tweets blaming Hamas for a recent civilian casualty incident, backed up the claims that Hamas threatens reporters:

Why are we reading about this intimidation only in Jewish or Israeli media — or on blogs — and not in Western mainstream media?

Attorney Scott Johnson takes news outlets to task for this on the blog Powerline:

Hamas threats don’t account for the relentless ignorance and stupidity of the coverage of the Gaza hostilities, but they account for some of it. Reporters and their media employers cooperate with Hamas not only in suppressing stories that do not serve Hamas’s purposes, but also by failing to report on the restrictive conditions under which they are working.

This is no small point. Public opinion is a crucial element to this conflict. It will play a role in determining when the fighting ends, what a cease-fire looks like and who bears primary responsibility for the deaths of innocents.

If media outlets are suppressing images of Hamas fighters using civilians as shields, and using schools and hospitals as bases of operation, then people watching around the world naturally will have trouble viewing the Israelis as anything but aggressors and the Palestinians as anything but victims.

But they’re only getting half the story. And where I come from, a half-truth is considered a lie.

Why No Photos of Hamas Militants?