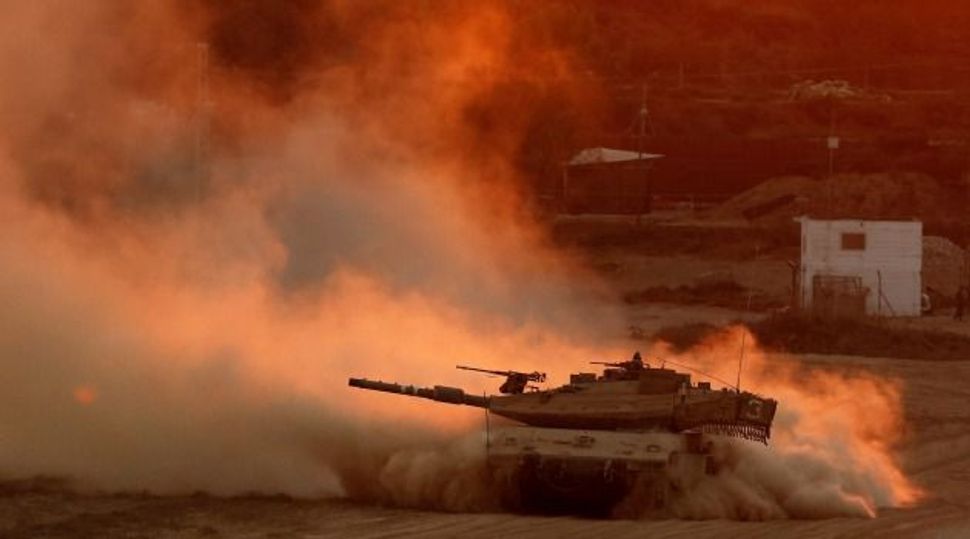 (Reuters) — The existential vise in which the state of Israel lives is tightening as the civilian body count and property destruction in the Gaza Strip mount. The latest war between Israel and Hamas is further testament to the historical fact that Israel’s forefathers had to conquer the land that today’s Israelis dwell in and ferociously defend. What hope is left of finding a lasting settlement with the Arabs?

In his “My Promised Land,” Haaretz journalist Ari Shavit repeatedly and poignantly poses his country’s most pointed questions: How to live as free and moral people on the ruins of a dispossessed people? How to assuage the wounds inflicted on the expelled Arabs? And how to cherish the nation-fortress so dearly bought?

Shavit loves his country yet does not shy from describing the blood that flowed when his people took possession of it. He’s not alone in that uncomfortable place. The historian Benny Morris’ account, “1948,” is similarly unsparing of the brutalities that accompanied the expulsion of 700,000 Palestinians into permanent exile as the new state struggled to be born. Though denied a university post for years because of his apostasy from official Zionist positions on the “liberation struggle,” Morris did not change a word in his book but did change his mind about the nature of the Israeli state, seeing not its leaders but the Palestinians and their leaders as unassuageable enemies with whom peace might never be made.

That change was symptomatic. Though distinguished Israelis like David Grossman raise their voices against the attack on Gaza, and though there have been small protest marches in Israel, opposition to the fighting among Israelis remains subdued, with most opinion supportive, or detached. Tamar Herman, a political scientist, former Peace Now activist and author of the fullest study on the movement, says the pro-peace left has “lost contact with the mainstream.” Even Grossman, whose son was killed in the 2006 Lebanon war, writes that the logic of the present impasse compels Israel to defend itself, though he’s strongly critical of Prime Minister Benjamin Netanyahu’s refusal to reach out to Hamas and to talk in good faith to the leader of the moderate Palestinian camp, Mahmoud Abbas.

Thus two forces face off, each secure in its rectitude. “There is no war more just than this,” asserts Netanyahu, while Hamas political leader Khaled Meshal tells Charlie Rose that, “I do not want to live with a state of the occupiers.”

Meshal well knows that the battle he refuses to call off is violently asymmetric. Hamas’ main weapon -rockets – now penetrates deeper into Israel than ever before but has so far failed to inflict much damage, while the Israeli Defense Force has the military advantage in every way over Hamas fighters. If the war continues, defeat, whatever that may mean, is certain for Hamas.

Hamas’ most potent weapon is the world’s television screens. Images of bombed-out neighborhoods in Gaza and the deaths of so many Palestinian children – the latest occurring at a UN school Wednesday – are horrors that viewers in peaceful, liberal countries naturally blame on Israel. The swelling aversion to the mounting carnage is now buttressed by the UN secretary general, Ban Ki-Moon, who calls the destruction “outrageous  demanding accountability and justice.” Meanwhile, Israel’s most powerful ally, the United States, expresses “extreme concern” that displaced Palestinians are not safe in UN-designated shelters. No Western leader can do other than call for a truce, and a truce on its terms – in particular, the lifting of the Egyptian-Israeli blockade of its borders – is what Hamas wants.

Yet scenes of carnage seen on television cannot probe the truth and the extent of Hamas’ deliberate siting of weaponry near hospitals, schools and shelters, or the possible refusal of Hamas militants to allow Gazans to leave areas that Israel warns are targets. These charges, frequently made by Israelis and by some observers, could be shown to be true or false if an investigation were allowed, but television hasn’t produced any evidence for or against.

Israel’s collective mindset doesn’t make for competitive television. It is conditioned by fear that the surrounding world is more and more unpredictable and thus more dangerous; that Iran, which had gone cool on Hamas over the past three years, is now calling on all Muslims to help destroy Israel, and that, as ever, its enemies can lose and lose again – and it can lose but once.

But the cycle of violence may not be unbreakable. Guardian executive editor Jonathan Freedland, in a review of “My Promised Land,” detects some movement toward a “necessary goal” of acknowledging past oppressions and the need to share territory. And Grossman believes that Israeli opinion is maturing under stress, enough to be able to form a powerful right-left, Israeli-Palestinian movement for negotiation and hard-nosed settlement, bypassing the calcified positions of Israel’s political leaders.

Yet the existential question still hangs over every Israeli: “What if the two state solution is impossible?” It is a terrible question, for if it is, all that is realistically left is war stretching into the foreseeable future. Gaza may be a foretaste.