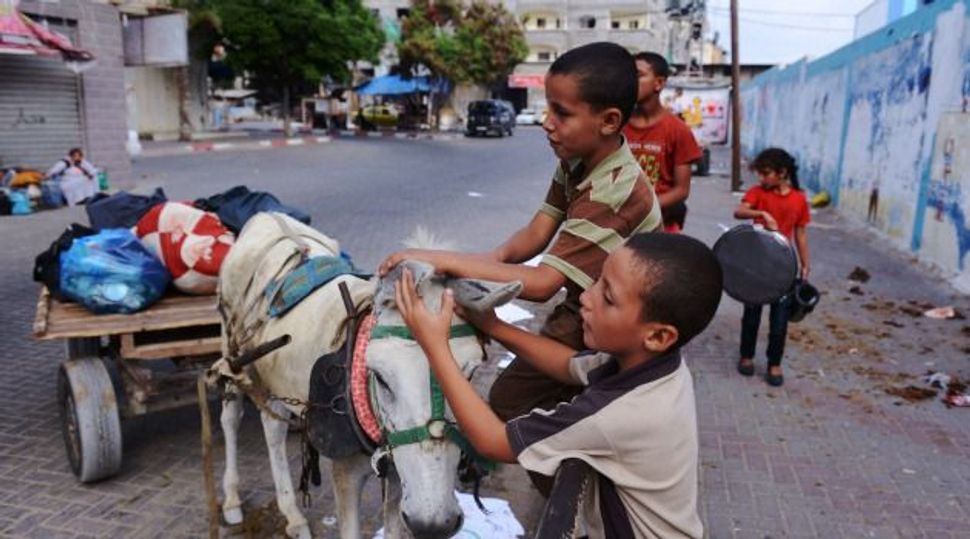 Again and Again: The essential problems in the Israeli-Palestinian conflict remain unaddressed. Image by getty images

Naftali Bennett, Israel’s minister of the economy, wants to defeat Hamas. “Hit Hamas without mercy,” Bennett said. “Day and night. On weekdays and holidays. Without respite and without rest. Until they are defeated.” And Bennett is not alone. In a new poll, 41% of Israelis say they want to topple Hamas. Benny Morris, the noted Israeli historian, wants to prepare the Israeli people to for sure topple Hamas the next time.

Political organizations and their leaders represent an idea but they don’t own that idea permanently. Should they move off the stage, other existing organizations or political entrepreneurs can grab it and run with it. Or, new representatives may emerge and organize around the idea. To try to avoid attacking Gaza in the future, the government of Israel has to think not only about addressing its organizational foe, Hamas, but also the larger issue of resolving the Palestinian question.

The central idea that Hamas embodies is that the pathway to Palestinian self-determination will be achieved through armed struggle against Israel. From its charter to the bus bombings of the 1990s to the second intifada to the rockets and tunnels of late, Hamas has had no trouble demonstrating this idea in practice.

Hamas was not the first to advance this notion; that was the Palestine Liberation Organization from the 1960s until its 1988 declaration, the 1991 Madrid talks, and the 1993 Oslo breakthrough. In fact, Palestinian Islamists initially were reticent to embrace armed struggle, choosing instead to focus on social change or the Islamicization of Palestinian life and society. In the 1980s, that started to change among Palestinian Islamists, with, for example, the formation of armed Islamist organizations in 1983 and, more dramatically, the official formation of Hamas, its participation in the first intifada, and the publication of its charter in 1987-88.

In short, the idea of armed struggle preceded Hamas but as the PLO moved toward compromise with Israel, Hamas took on the mantle of armed resistance. My point here is that that exact process could repeat itself even if the reason Hamas would no longer be the standard bearer would be different from that of the PLO. Moreover, the next group’s version of armed struggle could be even worse for Israel than Hamas.

Whether to counter Hamas or to avoid future rounds of fighting, a number of observers have made the point that Israel needs a strategic vision that politically addresses Palestinian national demands. As the write Dahlia Scheindlin recently wrote:

Or, as Professor Naomi Chazan, former deputy speaker of the Knesset, contends, “There is a diplomatic horizon, albeit one fraught with new obstacles and risks.”

In practice, the idea of invigorating a political pathway usually comes back to Palestinian President Mahmoud Abbas and the Palestinian Authority. For example, some of the ceasefire proposals have talked about inserting PA forces into Gaza to police the crossing at Rafah.

Steven Cook is rightly critical of approaches that depend on Abbas. The Israeli government has had a decade to work with President Abbas and, with the exception of former Prime Minister Ehud Olmert, it has not done so in a serious, engaged manner:

“The combination of American and Israeli political pressure, missteps, and disingenuousness have consistently left the Palestinian president in a bind, forced to take part in negotiations that he and his advisors knew would never go anywhere, and then hung out to dry when they failed.”

But that should not mean that we dismiss the idea of reinvigorating political pathways that could improve the Israeli-Palestinian relationship. Even if “it may very well be too late to help” Abbas, as Cook argues, a constituency interested in creating a genuine political track will still exist. Just like the idea of armed struggle is bigger than Hamas, the idea of a negotiated resolution to the conflict is bigger than Abbas and bigger than the “peace process” as it has been run by the United States.

It will not be an easy slog given all the diplomatic failures and obstacles. At the same time, the wreckage of the many negotiations has left some useful proposals and public sentiment has not foreclosed the possibility of a political resolution, even if pessimism is understandably the order of the day.

Jeremy Pressman is an associate professor of political science at the University of Connecticut.