What ‘Dead Poets Society’ Taught Me About Living Deliberately 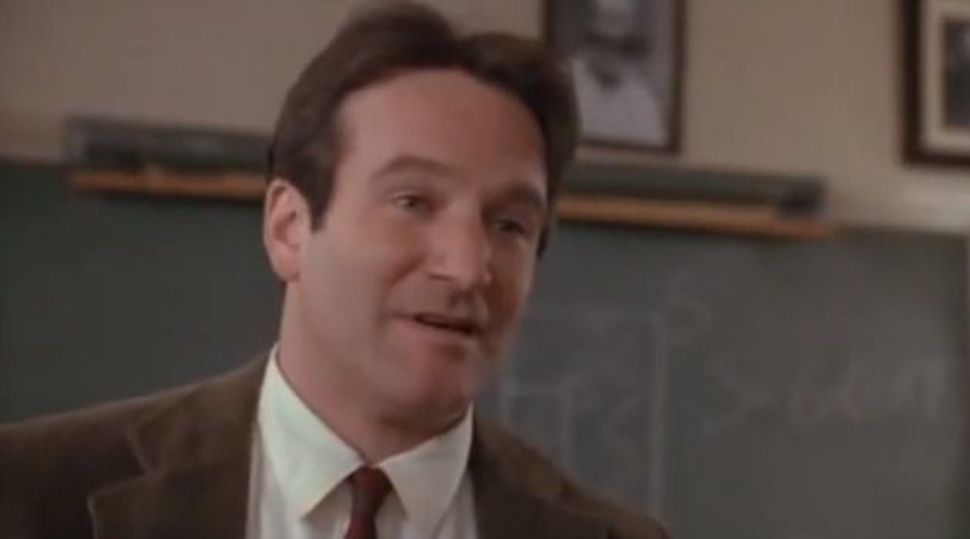 Robin Williams was not John Keating, the teacher he portrayed in the 1989 film Dead Poets Society. Keating was a character, made richer by Williams’ own improvisatory genius, but a character nonetheless. Williams, as we now all know, was all too human.

Yet their fates, for me, are intertwined.

Keating is a preacher of sensitivity. Be more sensitive, he advises. Quoting Shakespeare, Thoreau, Horace, and above all Walt Whitman, he exhorts his 1950s prep school students to be more than future doctors and businessmen. He urges them to discover the poets within.

By contrast, no one remembers McAllister, the Latin teacher who was Keating’s foil in the film – or still less the name of Leon Pownall, the character actor who portrayed him. Where Keating teaches “Carpe Diem!” (Seize the Day), McAllister conjugates Agricola… Agricolam… as he seems to have done for decades.

Yet by the end of the film, Keating has been fired, one of his students has been expelled, and another has committed suicide. McAllister, meanwhile, is the same as ever, still conjugating verbs as he walks in the snow. “Show me the heart unfettered by foolish dreams and I’ll show you a happy man,” he says, quoting Tennyson.

It’s easy to link Williams the man and Keating the actor. Though one was mentally ill and the other was not, both lived deliberately (Thoreau), both suffered heartbreak as a result, both testify to what human beings can achieve in their art, and what costs they might pay. Williams, diagnosed as bipolar, vacillated between periods of mania – easy to see in any interview he ever gave – and, we have learned, times of great despair. Keating is not so readily diagnosed, but his way is also the way of extremes. Great joy and great sadness. Great exuberance and great loss.

I saw Dead Poets Society when it came out in theaters. I was seventeen years old, and about to leave for college, and I became a John Keating acolyte. I read poetry in Columbia’s Postcrypt café, which resembled the Dead Poets’ secret cave in more ways than one. I lusted after experience of all kinds. And eventually, I became a teacher in the Keating mode, even running my Camp Ramah Frisbee players through a drill based on the film. (My supervisors worried we were a cult.)

Even in those years, though, I wondered about the costs of such “deliberate” living. The “best minds” of Allen Ginsberg’s generation were “half-destroyed by madness.” To live too sensitively was to court chaos, instability, even danger. How could I find the right midpoint between stultification and madness? And what was the boundary, if any, between Carpe Diem and what would later become known as bipolar disorder?

These concerns have not faded over time. On the contrary, the stakes have only risen. I have lost friends to mental illness, drug abuse, alcoholism — all demons Williams himself battled for years. Indeed, some of these friends were rabbis, artists, community leaders. So while many were shocked that a genius like Robin Williams, who made the whole world laugh, could be so devastated by depression, I was not. The genius and the illness seem like reflections of one another. Or perhaps not reflections, but points along a spectrum, so blurred and diffuse as to occasionally be indistinguishable.

I have struggled myself, too, both with bouts of depression and with the consequences of living the life I have felt impelled by my deepest values to lead. On the one hand, I have had wonderful, powerful experiences at the far reaches of human convention, from months spent in silent meditation to revelries at Burning Man and around the world; from tough battles for justice to intimate relationships enriched by a whole lot of work and love. I will not, when I come to die, find that I have not lived.

On the other hand, my “portfolio lifestyle” (a term I learned from the writer Jonathan Rauch) pays a lot less than others might. Which translates into less comfort, less security, less healthcare, less stability. As the years pass, the gap widens between those on the tracks, and those off the rails.

I see similar dynamics at play in our spiritual and ethical lives too. On the one hand, I have long loved and tried to champion forms of spiritual and social engagement that celebrate the vital forces of human life, that shun repression, that liberate. I am animated by the Hasidim and their fiery love of God (“with all your heart and all your might”), by the mystics, poets, perverts, and priests.

On the other hand, the McAllisters of the Jewish world join federations, build synagogues, sustain institutions. They give each other plaques at benefits I could hardly afford. At the end of the day, they go back to large homes.

At an earlier time, it would be easy for me to condemn them. But I don’t know anything anymore. Does the creative, vital, spiritual life flow from a kind of mental defect? Are the beautiful yearnings of art and religion something that could be corrected by medication?

I don’t mean these questions to be rhetorical. Many of my friends today are artists, writers, creatives of all kinds. They inspire me, and keep me young at heart. Yet whether depressives or simply sad, they are often melancholic. Whereas, I am still in touch with my friends from law school, now mostly living in the suburbs, seemingly happy.

Illness, death, and suffering touch all of our lives, to be sure. And fortunately, I do not suffer the way Williams apparently did. (This is not due to strength of will — only to chemistry.) But whenever someone brilliant takes their own life — Virginia Woolf, David Foster Wallace, Nick Drake, Spalding Gray, Alexander McQueen, Mark Rothko, Sylvia Plath — I wonder. Maybe McAllister was right.

The visionary poet William Blake depicted the irresolvable tensions between Apollonian and Dionysian, world-maintaining and world-destroying, religion and spirituality, institutions and art, McAllister and Keating, as nothing less than the conflict between Heaven (morality, stability, purity) and Hell (eros, dynamism, vitality). More poets favor Hell, but more accountants favor Heaven. Blake wanted both: a marriage of the two, a joining of the ecstatic and the grounded, the fire and the earth.

Others of us feel as if bobbing in between, with no compass, no knowledge of whether we desire a compass, no certainty save perhaps love.

What ‘Dead Poets Society’ Taught Me About Living Deliberately