A Century After World War I, We Don’t Put Ourselves on the Line for Beliefs 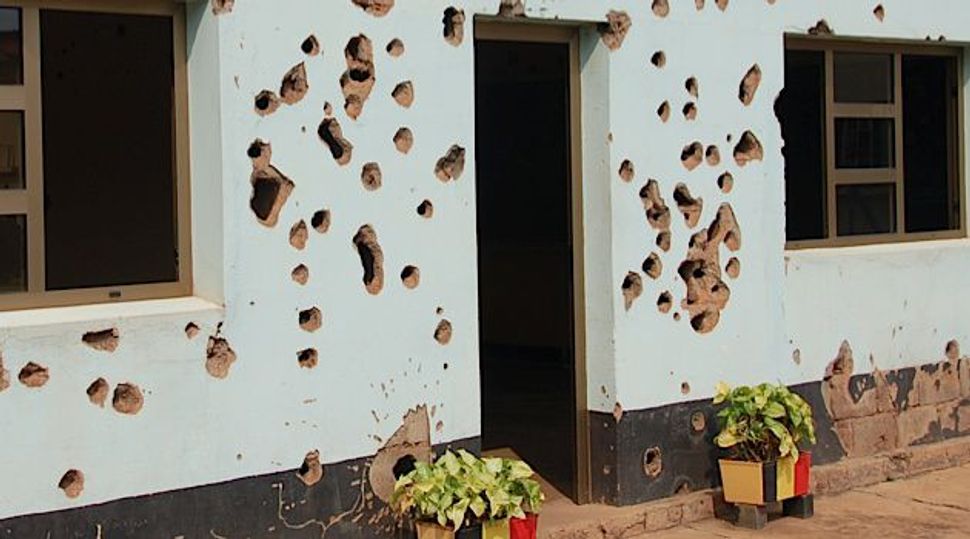 Belgium Again: A memorial to Belgian soldiers killed in Kigali, Rwanda, in 1994, 80 years after the first battle of Ypres in World War I. Image by wikimedia commons

A century ago, as World War I began, many countries were willing (in the beginning, even eager) to expend their blood and treasure in the name of national pride and “glory.” We remember World War I as especially egregious in this regard, as both warring blocs were imperialistic; and considering the autocratic nature of Czarist Russia, the Allies were not even clearly more democratic domestically than the Central Powers. The contending alliances in World War II, of course, were more easily differentiated on moral grounds (despite one of the Allies being Stalin’s Soviet Union). Still, the citizenry and subject peoples of the engaged powers were overwhelmingly willing to sacrifice themselves in ways that nowadays seem unlikely.

The Western world, mainly North America and Western Europe, is no longer willing to engage in even a modest fraction of that level of sacrifice. This first became clear with the slow and ineffectual response of the United Nations and Europe to the war in Bosnia — ironically, where an assassination sparked the global conflict in 1914. Its European neighbors were basically willing only to observe and give out band-aids as Serb militias laid siege to a major European city (Sarajevo), and armed thugs rampaged through dozens of towns and villages, giving rise to a new expression in our language, “ethnic cleansing.”

It’s only after the tragic farce of the slaughter of helpless Bosnian-Muslim civilians in the Srebrenica “safe area” that the United States and NATO intervened with a modicum of air power, which, together with an offensive by a newly strengthened Croatian army put an end to that grim conflict. NATO also acted to end Serbian atrocities against Albanian Kosovars a few years later, but its operations were inhibited by the mandate to fight without incurring casualties; so NATO’s commander, General Wesley Clark, was forbidden to employ low-flying helicopter gun ships or to put any troops on the ground.

In 1994 there was the greatest travesty of all, with scenes of the Rwandan genocide coming into our living rooms, via television, in real time, while the United Nations was withdrawing its troops and the United States was even denying there was a genocide (which legally would have obligated it to act). About 800,000 noncombatant men, women and children were slaughtered within 90 days.

America’s inaction in Rwanda emanated from the debacle suffered in Somalia less than a year before, in the “Blackhawk down” incident, with the loss of 18 army Rangers. The United States, the sole surviving superpower, was hampered in its foreign policy because of an admittedly tragic event — but the slaughters we remember now in the Great War (for example, more than 57,000 British casualties on the first day of their offensive at the Somme) should remind us that the loss of 18 soldiers doesn’t compare in relative terms.

The historic contrast is breathtaking: the willingness of the world’s Great Powers and lesser countries to plunge themselves into an abyss over largely vainglorious issues in World War I, while today, most of the Western world is incredibly gun-shy, almost pacifist; a more measured military commitment (including accepting some losses) in the service of humanitarian causes — like ending mass slaughters and genocide — is very much in order. This is most relevant today in Syria, where the unwillingness of the United States to act with its European and Arab allies to strike the Assad regime from the air has prolonged the untold suffering of millions and may ensure an uglier end than necessary. Besides, humanitarian crises often have strategic consequences: Our early reluctance to aid moderate rebels in Syria has spilled over into Iraq, with the growth of Islamist extremism in both countries.

Iraq reminds us that we also need to know when it’s safe and advisable to intervene militarily, and when we can do relatively little — such as in the current Ukrainian crisis. The abiding lesson of the World Wars should not be to avoid war at all costs, but to be more judicious and more humane in deciding when, where and how to use military force.

We should not go off on a quixotic military crusade, like making “the world safe for democracy,” as proclaimed then (or bringing democracy to Iraq, as contended 90 years later) — especially if your country has no real international support in doing so. But we should not avoid the use of force when humane (not to mention, strategic) considerations demand it. And yes, one must pick and choose. We couldn’t intervene militarily against a nuclear-armed Russia to save Chechnya’s aborted effort at independence or, more recently, to safeguard Ukraine’s territorial integrity. But there is no excuse for tolerating the outrages against unarmed populations in Bosnia for two years, nor stopping the outright genocide in Rwanda 20 years ago, and for having been similarly restrained in today’s Syria.

Ralph Seliger is a freelance writer and administrator of the Partners for Progressive Israel Blog. These views are his own.

A Century After World War I, We Don’t Put Ourselves on the Line for Beliefs