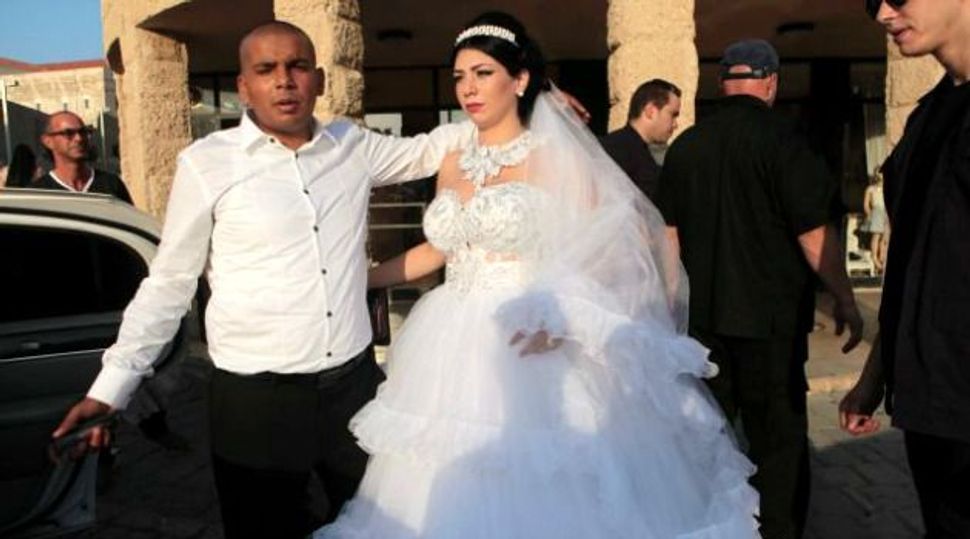 Last Sunday evening, just 24 hours before the latest ceasefire between Hamas and Israel was due to expire amid talks in Cairo, the top story on most Hebrew news sites was a small demonstration against a wedding of a “mixed” Israeli couple in central Israel.

Morel Malka, a Jewish Israeli who converted to Islam and her Palestinian Muslim groom, Mahmoud Mansour, had found themselves in court that morning appealing for an injunction against a protest organized by Lehava, an anti-assimilation, anti-miscegenation group in Israel known for inciting against Arabs.

Lehava got a hold of the invitation from the couple’s Facebook page and posted the date and location online with a call for Israeli supporters to show up and protest the private union in the name of Jewish continuity. The fact that the Rishon Letzion Magistrate Court decided to sanction the protest — whose most popular chant was “death to Arabs” — reflects how the line between freedom of speech and incitement has blurred, and how racist expressions against Israeli Arabs have become commonplace.

Lehava, which means flame in Hebrew and is an acronym for “preventing assimilation in the Holy Land,” is on a declared mission to “save” Jewish women from Arab men (it doesn’t talk about saving Jewish men from Arab women). The effort to have Jews stick with Jews is not inherently discriminatory or racist, but Lehava and a few other similar groups in Israel have taken their battle against assimilation in that direction by focusing their efforts on demonizing Arabs. Their initiatives include running a hotline encouraging callers to inform on Jewish-Arab couples, issuing kosher certifications to businesses that don’t employ Palestinian citizens of Israel and campaigns that send the message to Jewish women that each Arab man they meet is part of the greater “enemy” of Israel. Their Facebook page was recently taken down due to accrued complaints of incitement. However their director, a sworn Kahanist from Kiryat Arba, claims they can’t be anti-Arab since they oppose Prime Minister Benjamin Netanyahu’s son’s relationship with a non-Jewish Norwegian woman. Lehava has yet to stage a protest in front of the prime minister’s home.

Though Lehava is a small, extremist group, their mission of combatting intermarriage is something most Jewish citizens identify with in principle. According to a recent Haaretz poll, 75% of Jewish Israelis would not marry out of their religion (65% among the Arab sector) and 67% believe assimilation presents an existential threat to Jewish people. Most Israelis likely disapprove of Lehava’s incendiary and illiberal tactics, but have largely remained supine in the face of Israel’s law barring marriage between people of different religions — which is the reason Morel Malka and Mahmoud Mansour couldn’t be married here without one of them converting, and why intermarriage is a rarity.

Most Jewish Israelis want the country to maintain its Jewish majority, even if it means privileging Jews at the expense of equal rights. When Israelis say they want Israel to retain its Jewish “character,” what they mean is a permanent Jewish majority that guarantees Jewish self-sovereignty vis-a-vis the Palestinian population. That is why so many liberal Zionist Israelis champion the two-state solution over one democratic state for all citizens. The ban on intermarriage is one way in which Israel tries to artificially preserve its Jewish sovereignty. The lack of separation between church and state is the guiding principle of all civil laws and the force behind both de jure and de facto discrimination against non-Jewish citizens who are seen, ipso facto, as a threat to Jewish power and continuity. Lehava has taken that sentiment to an extreme.

In permitting their demonstration, the court chose to give this racist group a platform under the guise of freedom of speech and at the expense of liberal values meant to protect the right of two consenting adults to marry each other in peace. Newly instated president Reuven Rivlin pointed this out in a Facebook status congratulating the couple and stating that there is a “red line between freedom of speech and protest on the one hand and incitement on the other.” He did not however call for outlawing Lehava or reforming Israel’s discriminatory laws, instead treating it as an isolated incident. But “death to Arabs” has been heard many times before at demonstrations: almost every year on Jerusalem Day, often at settler and right-wing protests and most recently, at anti-war protests in Tel Aviv in which left-wing Israelis were physically attacked. The decision to allow this protest is especially revealing of the inequality between Jewish and Palestinian citizens considering that in the last month since the Israel-Hamas war began, over 1,000 Palestinian have been arrested for protesting the operation in Gaza, the majority released without any charges.

Israel is always walking a fine line between privileging Jews and trying to uphold a minimum modicum of democracy. In this instance, that line was erased. Maybe because Lehava ultimately fulfills a purpose that serves the interests of the state: safeguarding Jewish sovereignty against the “Palestinian threat.” This would also explain why that fine line is so often obliterated in the West Bank, where settlers have rights their Palestinian neighbors do not, and get away with countless illegal actions that authorities passively or actively endorse in the name of protecting the Jewish frontier. During periods of increased confrontation between Israel and Palestinians, the notion that the Arab is the enemy appears more excusable. As long as the laws privileging the Jewish population remain in place unchallenged, incitement, segregation and racism will not only continue to be sanctioned on a case-by-case basis, they will become the norm.