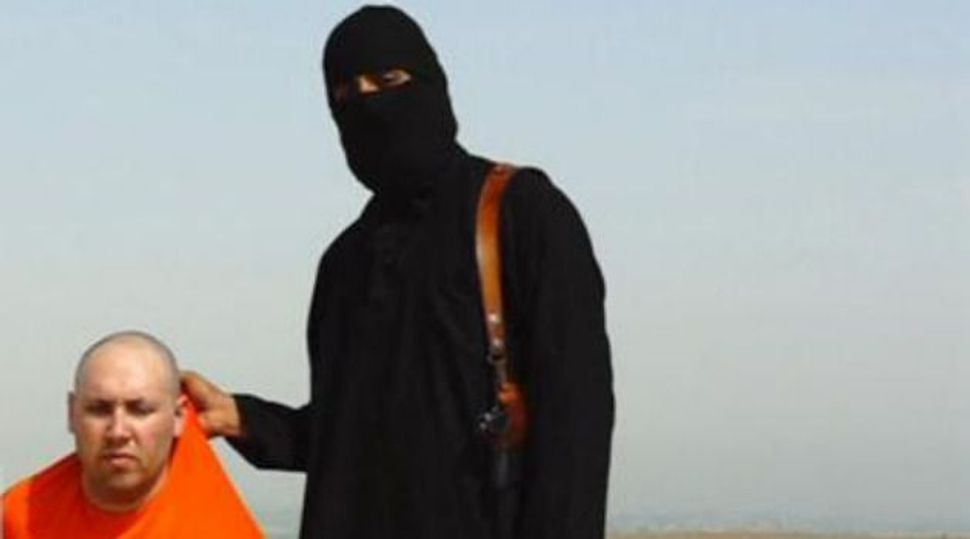 A masked Islamic State militant speaks next to a man purported to be U.S. journalist Steven Sotloff at an unknown location in this still image from an undated video posted on a social media website. Image by Reuters

We can now say that Steven Joel Sotloff was Jewish.

We can now say that he was the grandson of Holocaust survivors, that his mother was a preschool teacher at Temple Beth Am in Pinecrest, Florida, a Reform synagogue in South Miami where Sotloff attended day school.

We can now relay to you that “the family has been very much a part of the South Miami-Dade Jewish community,” as Jacob Solomon, president and CEO of the Greater Miami Jewish Federation, told us for the record.

We can now say that Sotloff was also an Israeli citizen, studied government at the Interdisciplinary Center in Herzliya and wrote for Israeli publications.

We can now say all this publicly because Sotloff is dead, the second American journalist beheaded by the barbaric Islamic State of Iraq and Syria. An impermeable cone of silence surrounded news of Sotloff’s disappearance last year and, more recently, the fact of his Jewish background and connections. That silence was requested by his family and maintained by media and Jewish organizations, including the Forward, in the hope that it would protect him from the worst.

Remarkably, in this age of unfettered social media, where boundaries between public and private are fading more quickly than old newsprint, the family’s request was respected.

Now it is appropriate to break that silence and humanize the innocent victim of an outrageous, unacceptable murder. Sadly, what ISIS did to Sotloff and James Foley before him is no worse than what this rampaging group has done to thousands of others, Muslims and nonbelievers alike. But we are human. We intuitively relate to our own. And Sotloff was one of us.

Danielle Berrin, a reporter for the Jewish Journal in Los Angeles, posted a photo from her first-grade class at Beth Am, where she was seated in the first row and Sotloff was standing in the row behind. The “goofy, smiley, playfully mischievous kid from Miami” was a childhood friend and, later, a Facebook acquaintance as he freelanced stories from the Middle East. She remembered that, “rather than cower from danger, he flew right into it, intent on telling the stories he believed would shape history.”

Sotloff spoke Arabic, studied Islam and evidently cared about the people he covered in Yemen, Libya and Egypt, writing for American and Israeli publications. And then, fatefully, he went to Syria.

Shortly after Sotloff’s kidnapping in August 2013, his parents, Arthur and Shirley, set up an emergency headquarters at their home, and began to assemble a team that would handle the crisis thrust upon them. They turned to Jewish communal leaders and then to several kidnap and ransom experts, and to public relations specialists working pro bono to bring about Sotloff’s release.

The key strategy was secrecy. Secrecy because the United States government, as a matter of policy, does not publish the names of its citizens held by ISIS. And secrecy because there was a genuine fear that Sotloff’s Jewish identity and Israeli passport could put him at greater risk of torture and death.

A quiet effort led by the Miami federation raised $15,000 to fund the family’s work as it tried to find out as much information as possible about Sotloff’s well-being. Others helped with airfare and travel costs.

News of Foley’s murder on August 19 upended the strategy. Sotloff was thrust into the spotlight by ISIS’s chilling warning that he would be its next victim. Friends and acquaintances recognized him in the video distributed by ISIS. The veil had lifted.

The Sotloffs and their support team travelled to Washington to make an urgent appeal for their son’s life. They did not succeed in meeting with President Obama or Vice President Joe Biden, but they did talk with senior officials at the White House and State Department.Through Malcolm Hoenlein, executive vice president of the Conference of Presidents of Major American Jewish Organizations, the Sotloffs also reached out to Jewish groups, updating them on their efforts and asking for continued silence.

The request for a news blackout did not reach all publications simultaneously. The Orlando Sentinel initially included information about Sotloff’s Jewish roots, as did The New York Times, but those references were quickly scrubbed from the Internet.

The same pattern emerged in the past few days, as word of Sotloff’s Israeli citizenship and connections began to seep out, only to then be removed at the request of the family’s representatives. Only when the Israeli foreign ministry in Jerusalem confirmed his citizenship did the Forward and other publications acknowledge the truth.

As Sotloff’s mother Shirley said in a carefully-worded, heartbreaking video pleading for his release, “Steven is a loyal and generous son, brother and grandson. He’s an honorable man and has always tried to help the weak.”

But virtuous qualities make no difference to the likes of ISIS, who torture and behead with impunity. Sotloff, only 31, was doing important work as a freelance journalist — extraordinarily dangerous work. Syria has, in fact, been the most dangerous country on the planet for journalists for two years now. The Committee to Protect Journalists estimates that at least 70 other journalists have been killed covering the brutal conflict; more than 80 have been kidnapped.

Most of them were Syrian. We mourn them, too. But forgive us if we experience a special kind of grief for the Jewish kid from Miami, who played rugby and video games and tweeted about American basketball and risked his life to tell a critical story.

Let his death serve as an urgent reminder to our government and the leaders of other nations — especially those who have shamefully paid ransom to release other hostages, only to further enrich these awful captors and encourage more kidnappings and murders. It’s past time to have a plan to deal with ISIS. It won’t help Steven Sotloff, but perhaps it will save and protect others.

“Our hearts and prayers are with the Sotloff family,” said the condolence note on the Miami federation’s website. Ours, too.