Summer’s Missing Question: What Is Zionism? 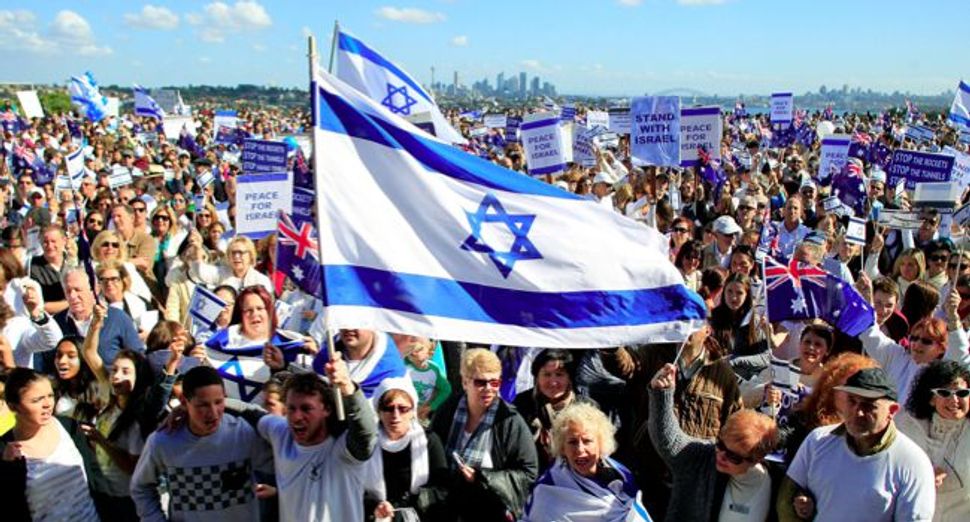 Raising the Flag: A Pro-Israel rally in Sydney, Australia this summer. Image by Getty Images

In October 1998, in a suburb of Buffalo, N.Y., an obstetrician-gynecologist named Barnett Slepian was assassinated while standing in his kitchen, shot by an anti-abortion sniper hiding in the woods behind the house. It was a Friday night, and Slepian had just returned from synagogue where he was saying Kaddish for his late father.

Eight years later, in 2006, a journalist named Eyal Press wrote a book about the Slepian murder and Buffalo’s long-running abortion wars, “Absolute Convictions: My Father, a City, and the Conflict That Divided America.” Press’s father, Dr. Shalom Press, was one of just two other physicians besides Slepian performing abortions in the Buffalo area at the time. While most of the book is a study of Christian anti-abortion radicalism, a healthy chunk delves into the flinty progressivism of the Haifa-born Shalom Press, whose upbringing in the heyday of the Israeli labor movement had taught him never to give in to terrorism.

Curiously, the book has almost nothing to say about the relationship between Shalom Press and Barnett Slepian. The two physicians knew each other only casually. They covered each other’s rounds during vacations but didn’t socialize. To the best of his knowledge, the younger Press told me, they never discussed the variants of Jewish liberalism — Slepian’s Reform Judaism, Press’s Labor Zionism — that led them to risk their lives for decades providing what both believed was a human right. Apparently, it never occurred to them to ask each other. The two Jewish liberal traditions were, for all practical purposes, invisible to one another.

We’ve been hearing a lot lately about Jewish liberalism, particularly the Israel-centered version known as liberal Zionism. It refers to those people, mostly Diaspora Jews, who profess an emotional identification with Israel but don’t hesitate to criticize hardline Israeli policies toward the Palestinians. Lately liberal Zionism has become embroiled in a noisy crisis, struggling to reconcile the two halves of its birthright.

Liberal Zionism claims a long pedigree, but it’s actually quite new, a product of the Obama-Netanyahu era that began in 2009. In past decades doves and hawks might quarrel, but during episodes of U.S.-Israel tension they’d all stand with Israel. Over the past five years, though, the terrain has changed as the two allies have settled into a seemingly permanent state of confrontation. Israel pulls constantly to the right, America to the left. For many in the liberal American Jewish mainstream, signing on for a permanent slot with the right just isn’t an option. Hence, liberal Zionism: supporting Israel but not its policies. They claim legitimacy for their position by identifying with those on the Israeli left who share their critiques, including much of Israel’s security establishment.

This summer there’s been a flurry of declarations in the newsmagazines and op-ed pages that the liberalism-Zionism synthesis is in crisis. Its advocates say it’s getting harder to reconcile the two values, liberalism and love of Israel, as Israel’s policies move further to the right. Opponents say the two values were never compatible to begin with. Voices on all sides point to the shrinking relevance of the liberals’ Israeli counterparts in the peace camp.

Current Zionist debate, liberal or otherwise, focuses on which policies Jerusalem should be pursuing this month and what Washington should do about it. What it isn’t about is actual Zionism: the consideration of the place of Jews in the world, of their relationships with each other and with the societies around them. That’s the real crisis.

Zionism first arose as a radical proposal to reimagine the Jewish place in the world. It asserted that Jews as a group had shared interests that they could act on collectively. It declared war on traditional Judaism’s helplessness and passivity. It proposed creating a political framework through which Jews could gain agency to pursue their shared interests on the world stage.

That framework was Jewish statehood in historic Palestine, the ancient land of Israel. Later generations would romanticize the place of the land in the Zionist enterprise to forge a seeming continuity between Jewish tradition and the Zionist revolution. But for Zionism, the goal was political agency, self-determination. Statehood was a means to that end, not an end in itself.

And, as so often happens in history, the solution to one set of problems laid the seeds for a new set. Zionism succeeded in creating a Jewish state. It’s taken in millions of Jews fleeing oppression from Kiev to Casablanca. It’s created a famously world-class economy and become a leader in medical, agricultural and cyber research.

What it hasn’t figured out, even a little, is what role to play in the lives of Jews around the world whom it wants to inspire. It purports to be the nation-state of the Jewish people, yet its helmsmen, its educators, its creative class and even its religious leaders — especially its religious leaders — have scarcely any idea who and what that Jewish people consists of. Jews in the Diaspora by and large have only the vaguest idea of what it means to be Jewish in Israel. Neither side knows how to explain itself to the other.

Three generations after Israel’s birth, Israel and Diaspora Jewry are evolving at an accelerating pace into dissimilar, mutually incomprehensible entities, desperately dependent on each other but barely capable of discerning the other’s needs or reality.

There is one huge exception to this pattern: the Orthodox community. Orthodox Jews on both sides of the ocean, Haredi and Modern/Zionist alike, are deeply involved in each others’ lives and realities. They live a daily culture of ritual and commandment that binds them closely. Their children study together in seminaries, in yeshivas and kollels that forge a deep sense of shared destiny.

No, it’s the liberal and moderate Jews in the two communities who are growing apart. They’re the majority in both communities. They’re still the ones who carry the burdens of defense in Israel and lobbying clout and activism in America, who pay the bulk of taxes and finance the Jewish enterprise through their donations. They’re the ones who have the most to gain if a new Zionism emerges to bridge the gulf of Jewish incomprehension, and the most to lose if it doesn’t.

Summer’s Missing Question: What Is Zionism?