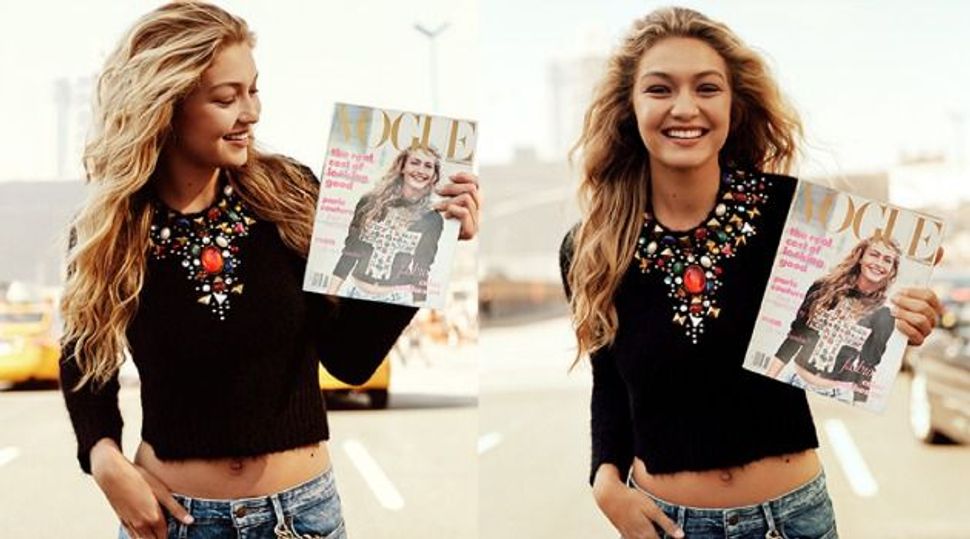 When Vogue editor-in-chief Anna Wintour was preparing the cover shoot for her very first issue back in 1988, she chose an Israeli model — Michaela Bercu — to grace the front of the glossy magazine. This summer, as Wintour prepared for the relaunch of the magazine’s website, she chose a Palestinian-American model — Gigi Hadid — to recreate the iconic cover.

Over at Haaretz, Shahar Atwan says it’s “interesting to wonder how much thought Wintour and Co. gave to Hadid’s family background when they mulled placing her in Bercu’s shoes,” but concludes that it “wouldn’t be fair on Hadid” if she was selected because of her Palestinian roots. Besides, Atwan says, Wintour had “more than enough reason to choose Hadid regardless of the political connotations.”

Atwan seems eager to toss off the possibility that Hadid’s Palestinian background helped her land this photoshoot — but from where I’m sitting, that possibility looks more than likely. In fact, I’d be surprised if the model’s background did not play a significant role in her selection. And I don’t think that’s “unfair” — to Hadid, or anyone else — at all. Just the opposite.

For starters, given the wealth of models Vogue has to choose from, what are the odds that a Palestinian woman was randomly chosen to recreate an Israeli woman’s look?

And given that the new Vogue.com goes out of its way to contrast Bercu’s Israeliness with Hadid’s Palestinianness — even though Hadid was born and raised in California — what are the chances that the latter wasn’t purposefully chosen to supplant the former?

Oops, did I say “supplant”? I meant “pay tribute to.” Or, well, at least that’s how Vogue.com is (delicately) putting it. 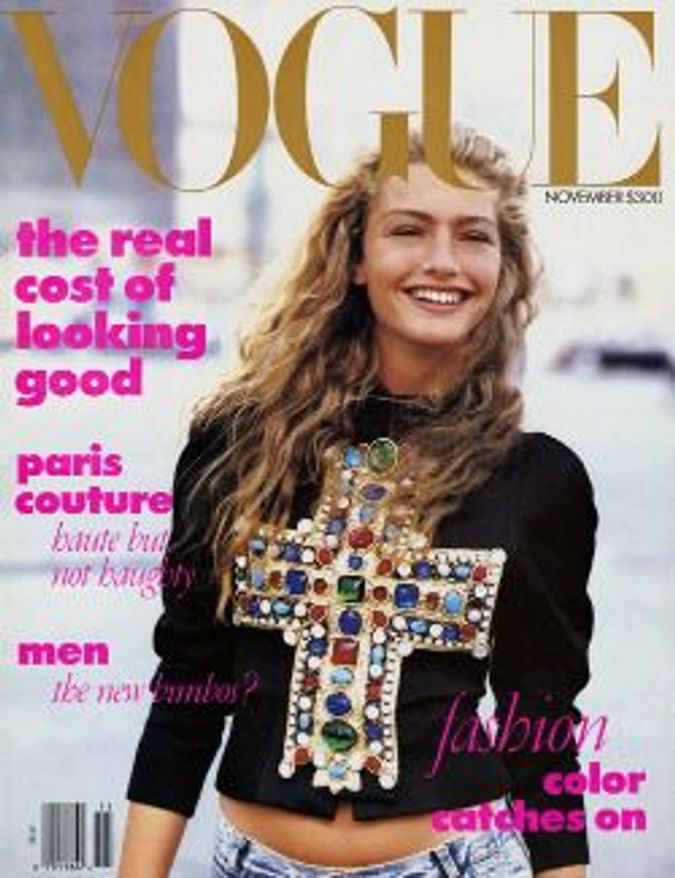 Maybe it’s just the Gaza war hangover talking, but I find it hard to read Hadid taking Bercu’s place as anything but supplanting — as anything but Vogue using a bold fashion statement to make an even bolder political statement along the lines of “Palestinian is the new Israeli.” It reminds me, actually, of “Maus” artist Art Spiegelman’s controversial new illustration for The Nation; titled “Perspective in Gaza (The David and Goliath Illusion),” the comic turns familiar biblical imagery on its head, showing a giant David facing off against a tiny Goliath. On Facebook, Spiegelman glosses this comic by saying, “Israel is like some badly battered child with PTSD who has grown up to batter others.” In other words, what Israelis once were, the Palestinians now are.

It may be giving Wintour too much credit (or too little — depending on your political orientation) to read this much into her choice of model. But then again, Wintour isn’t just known for her ruthless aesthetic; she’s also known for her political activism. I’m not just talking about that $40,000-a-plate dinner she hosted to raise funds for Barack Obama’s 2012 presidential campaign. Under her leadership, Vogue’s editorial content has been, shall we say, not unfriendly toward Palestinians — to the point where groups like CAMERA have accused the magazine of “presenting Israel as a ruthless occupier victimizing helpless Palestinians.” More broadly, the British edition of Vogue has featured the likes of actor Tilda Swinton modeling a scarf into which the word “Palestine” was prominently knitted. Suffice it to say the magazine isn’t shy about sympathizing with Palestinians.

And if that’s what’s happening now with the Hadid “tribute” — is that unfair to the model? I don’t think so. These days, models are often used to make political points (think of Bar Refaeli and Scarlett Johansson) and it seems naive to expect that it would be otherwise.

Besides, I actually think there’s a nice and subtle political point being made here — aside from the starker Spiegelmanesque point. Explaining their choice of model, the Vogue editors note that they “couldn’t help but recognize the resemblance between Michaela [Bercu] and Gigi Hadid.” You can say that again. The two women share the same wavy blonde hair, squinty smile and golden skin. When you pause to reflect on that visual similarity, you’re struck by the thought that this Israeli woman here and this Palestinian woman there could so easily be in one another’s place — Hadid could so easily have been born to Bercu’s parents and vice versa — which only makes the consequences of being born Palestinian as opposed to Israeli all the more glaring.