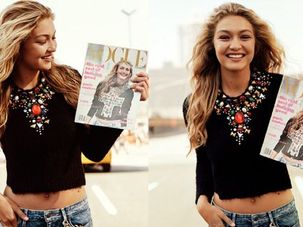 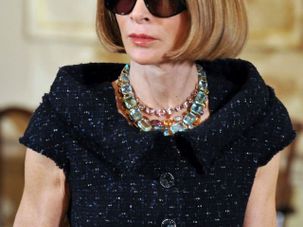 The September 2012 issue of Vogue marks the 120th anniversary of the publication. To celebrate, Editor in Chief Anna Wintour reflected on some of her favorite covers and offered insight into how they came together. One of those highlights was her very first cover as editor, in November 1988, which featured an Israeli model named Michaela Bercu. The image was positively revolutionary compared to previous Vogue covers: Bercu was photographed casually on the street, her natural waves loose and unstyled, her smile wide and infectious. Nothing about her evoked the heavy makeup or choreographed studio scenes of the era. She was the first model in Vogue’s history to wear jeans on a cover, and she sported a bejeweled Christian Lacroix jacket that showed a little bit of belly (“she had been on vacation back home in Israel and had gained a little weight,” Wintour explained). Although the high/low mix is now a staple in fashion, Bercu’s outfit was, like the rest of her look, ahead of its time.

As Vogue gets set to celebrate its 120th anniversary in 2012, there has been a lot of looking back at the fashion bible’s history. Most important for fashionistas everywhere is the fact that the magazine’s complete archives is now available online.

Israel can point to one indisputably successful international export, which so far, no one has shown any interest in boycotting: drop-dead gorgeous models.