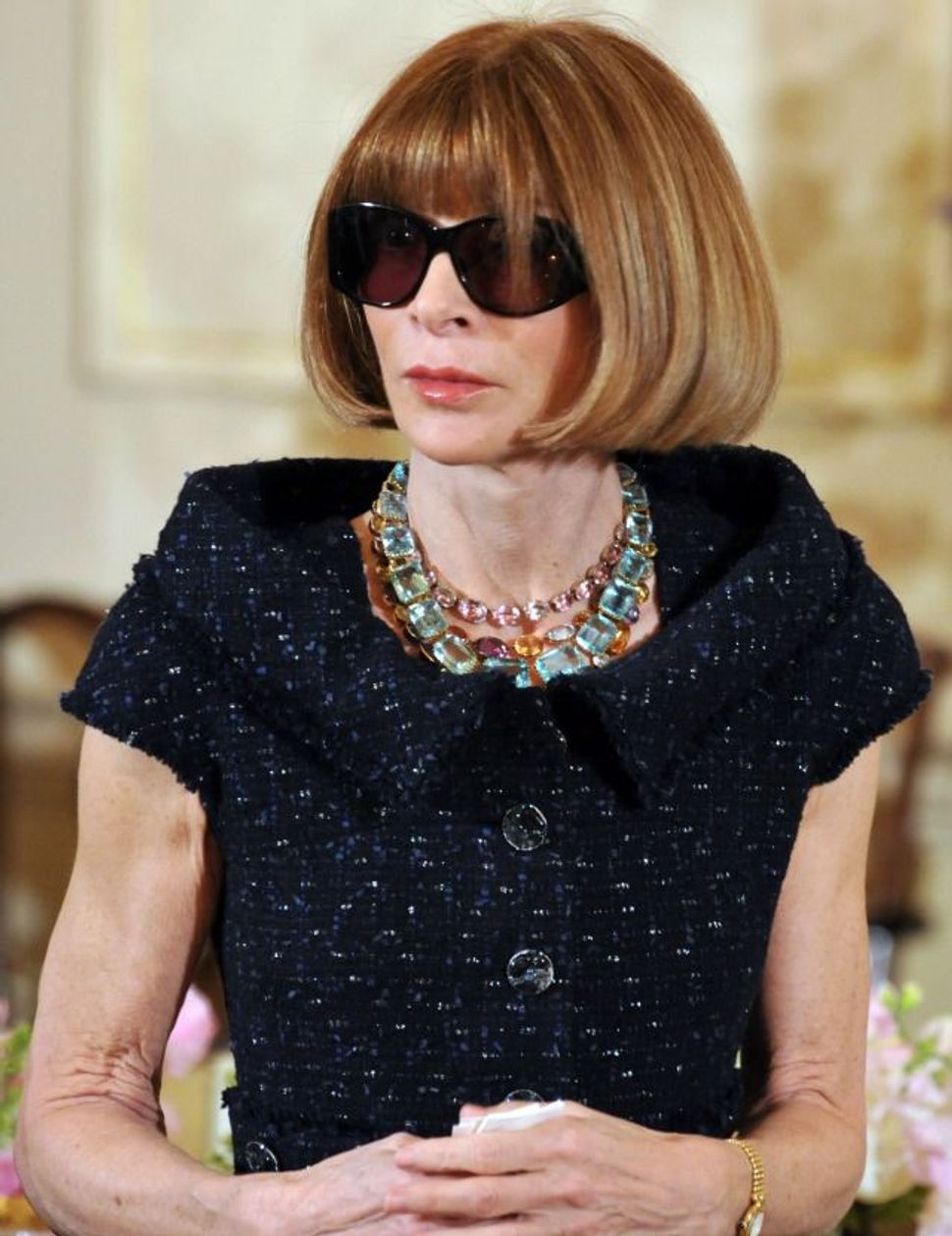 The September 2012 issue of Vogue marks the 120th anniversary of the publication. To celebrate, Editor in Chief Anna Wintour reflected on some of her favorite covers and offered insight into how they came together. One of those highlights was her very first cover as editor, in November 1988, which featured an Israeli model named Michaela Bercu. The image was positively revolutionary compared to previous Vogue covers: Bercu was photographed casually on the street, her natural waves loose and unstyled, her smile wide and infectious. Nothing about her evoked the heavy makeup or choreographed studio scenes of the era. She was the first model in Vogue’s history to wear jeans on a cover, and she sported a bejeweled Christian Lacroix jacket that showed a little bit of belly (“she had been on vacation back home in Israel and had gained a little weight,” Wintour explained). Although the high/low mix is now a staple in fashion, Bercu’s outfit was, like the rest of her look, ahead of its time.

But the clothes aren’t the only things that have changed at the world’s most iconic fashion magazine. Since Bercu’s big break, few Israeli models have appeared in Vogue. The most famous, Bar Refaeli, gets regular work, but she’s considered more of a fit for underwear and bikini shoots than for high glam. Unlike fellow swimsuit model (and fellow Leonardo DiCaprio ex-girlfriend) Gisele Bundchen, Refaeli has not fully crossed over into the styled shoots often seen in Vogue. Similarly, Israeli Esti Ginzburg appeared in the Sports Illustrated swimsuit issue, but she never made the jump to editorial work. (She later took a break at the peak of her career to do her mandatory IDF service.) Moran Atias, a Haifa native, did some high fashion runway work for designers like Roberto Cavalli, but she ultimately switched tacks and became an actress, most recently appearing in Adam Sandler’s “Don’t Mess with the Zohan.”

Israeli designers, however, have had somewhat better luck. Alber Elbaz, the Moroccan-Israeli designer of French label Lanvin, regularly appears in the magazine’s pages. Israeli-American Yigal Azrouel, who has a self-titled brand as well as a lower-priced diffusion line called Cut25, is also a Vogue mainstay. Jewelry designer Mirit Weinstock has had her pieces featured in European editions of Vogue, but not the American version.

Just like leggings and shoulder pads, models go in and out of style at Vogue. Currently, Israel is on the decline, while more and more ‘big’ models come out of countries like Brazil and China. The closest Vogue has come to hiring an Israeli cover girl since Bercu is actress Natalie Portman, who is half-Israeli and speaks Hebrew fluently. But Portman wasn’t selected because of her modeling credentials — she’s gorgeous, but her Hollywood star is what landed her on the cover. Like most magazines in the United States, Vogue has relied heavily on celebrities to sell issues; this year’s cover girls include Lady Gaga, Penelope Cruz and Scarlett Johansson, not top-shelf models like Arizona Muse or Daria Werbowy. Meanwhile, major models tend to rely on international editions of Vogue to land covers, then settling for photo shoots and editorials in the American version.

Could Michaela Bercu’s iconic Vogue cover ever appear on newsstands today? Doubtful. Someone would have photoshopped her stomach, and a photographer might have insisted that she not smile or squint her eyes. A stylist would have straightened her hair and insisted she pose in a studio with better lighting. Today, Bercu, like her countrywomen, may have even been put in the “bikini model” box and never given the chance to cross over into editorial work.

The best hope for an Israeli model landing the cover of Vogue again? Make sure that model is an actress. Other than Portman, there are not many Israeli stars who have achieved Hollywood stardom. Ayelet Zurer works consistently and starred alongside Tom Hanks in “Angels and Demons,” but she isn’t a household name — yet. Noa Tishby gets regular TV work, but she has been more successful as a producer than an actress (she notably sold the Israeli TV show “In Treatment” to HBO for an American remake). Alona Tal has the possibility to become more famous. She has appeared in TV shows like “Veronica Mars” and “Supernatural,” but she’ll need to appear in some higher-profile projects in order to stand out in a sea of young, pretty, blonde actresses. Unless Anna Wintour decides to completely change her business plan, the best way to get on the cover of Vogue will be to win an Oscar or a Grammy. So, beautiful women of Israel, time to focus your attention in that direction.

And what ever happened to Michaela Bercu? She has retired from modeling and has returned to Israel, where she lives with her four children … and her billionaire husband. No matter what happens, she’ll always have Vogue.