4 Ways Jews Are Thriving in France 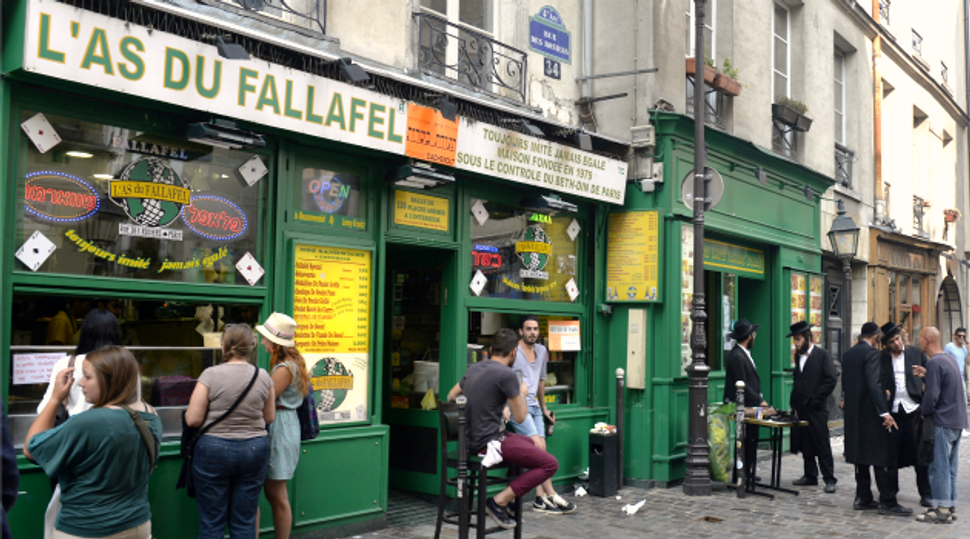 The news from France is bleak: anti-Semitic sentiment is on the rise, violent incidents are piling up, and Jews are packing up and leaving for Israel.

Recently, I learned that one of my cousins, tired of feeling marginalized, was planning such a move. That got me thinking.

I lived in Paris for a three-month period in the summer of 2013. Even then, I felt that being Jewish in France was a whole other ballgame than my experience as a Jew in Montreal or New York. French Jews were either French people who happened to practice Judaism, or Jews who happened to be French. I felt that there was no, or little, French cultural Judaism such as the Woody Allen/bagel-and-schmear combo we’re used to. At the same time, I felt more kinship with the Jews in France than I do with most New York Jews — because Jewish culture in France is Sephardic and, well, incredibly French.

There is certainly cause for alarm when stores close their doors for fear of attack; when shul-goers need to hide from an angry mob like the recent events on Rue de La Roquette; and when Jews like my family, who have been proud French citizens for decades, feel the need to leave their homes. But in all that panic, it’s easy (and dangerous) to forget what a strong impact Jews have had, and continue to have, on French culture. Here are a couple of examples:

Given the amount of street style snaps and runway shots invading my Facebook and Instagram feeds, fashion seems like a good place to start. French Jews have always been involved in fashion. In fact, the cult classic “La Verite Si Je Mens” revolves around a non-Jew trying to pass himself off as an Ashkenazi Jew in “Le Sentier,” Paris’ garment district — which is inherently funny because, duh, everyone there is Jewish (and Sephardi, but more on that later).

More recently, Jews have left the shmatte for high-end luxury. French brands like Sandro, Maje and Claudie Pierlot have fashionista followings from London to New York. You may not know, however, that all three brands are owned by Jews — sisters, in fact. Judith Milgrom and Evelyne Chetrit were born in Morocco, and moved to France with their parents when they were kids, mirroring the experience of many French Sephardic Jews, who now outnumber the older Ashkenazi community. Both are vocal about their Jewish heritage. In an interview with The Telegraph in 2012, Milgrom even talked about not working on Shabbat: “About 20 years ago, I started to observe the Jewish Sabbath really seriously. From dusk on Friday until dusk on Saturday, I don’t do any work, don’t shop or look at my email or phone. It’s unbelievably therapeutic.”

On the more kitschy side of things, let’s not forget Yiddish Mama. As Laurent David Samama over at the Daily Beast shows, young Parisian designer Camille Vizioz-Brami is doing for French Yiddish culture what Mile End did for the New York deli. Boasting slogans like “Power Yiddish Mamma,” “Super Mensch” or “Chepselleh,” her apparel makes quite a statement in a time where Jews may feel compelled to mask their identity for fear of anti-Semitic reprisals.

You know you’ve made it as a people when “un gars de chez nous” (literally: “our guy”) marries a royal. When news came out that comedian Gad Elmaleh, who was born in Casablanca and found fame in France by way of Montreal, was marrying Charlotte Casiraghi (Grace Kelly’s granddaughter!) my family was torn between intense pride and fear — that marriage into a publicly Catholic family would mean the end of his brand of Moroccan Jewish humor. Two years later, he’s still going strong, and with every new joke he makes thousands of Sephardi Jews double over in laughter while shedding a tear for the lost Arab homeland.

Full disclosure: My grandmother, who predicted that Elmaleh’s child with Casiraghi would be baptized, was right.

Jewish comedy has left its mark on French culture in other ways: movies like “La Verite Si Je Mens,” (mentioned above) and its two sequels, the last of which was released in 2012, have become symbols of Jewish, and more specifically Sephardi, life in France. A kind of “We’ve arrived, so we can joke about it” attitude, if you will.

That kind of irreverent and self-deprecating worldview is on display in recently-launched Jewpop.com (think Heeb, but French), which boasts verticals with names like “Ils Sont Partout” (They’re everywhere), poking fun at the Jewish tendency to claim everyone as Jewish.

Having lived a couple of blocks away for the best of three months, I’m the first to say that the Rue des Rosiers isn’t what it’s cracked up to be. The heart of Paris’ historical Jewish neighborhood is more a tourist trap than anything else — though l’As du Fallafel gets me every time. More recently, the specter of anti-Semitism has loomed over the area, bringing up painful memories of the 1982 shooting that left 6 dead and 22 injured.

But not far, on Rue des Ecouffes, hipsters and “bobos” (the French equivalent of a yuppie) flock to Schwartz’s, a deli that serves up pastrami sandwiches and New York-sized pickles with flair. The restaurant’s success has pushed the owner to open two new locations, one of them on Rue d’Eylau, a few steps from the Eiffel Tower. Though the fare is Ashkenazi, Sephardim can be seen flitting in and out of the bright red booths — but shhh… that’s a secret.

Much of the media’s recent focus has been on the sharp rise of anti-Semitism in France. With good reason: recent data from Israel shows that France was the country’s largest source of immigration in 2014, in part because French Jews no longer feel safe at home. And tales of Jewish teenagers being attacked with a taser stun gun or chased with an axe certainly don’t help project the image of a country where tolerance reigns.

But the sensationalist nature of anti-Semitism and fear often blurs out the positive. Like an initiative in Bussy-Saint-Georges, about 20 miles east of Paris, which seeks to unite the town’s Jewish, Muslim, Christian and Buddhist citizens in a common “Esplanade of Religions.” Guy Benarousse, who has served as a rabbi to the 120-family Jewish community since 2005, told the Forward in May 2013 that he hoped that his initiative would serve as a model for interfaith cooperation in France.

“As a symbol, I asked that the mosque be built next door to the synagogue, “ he said. “The point is to say, ‘We can disagree, but we have to talk to each other.’”

4 Ways Jews Are Thriving in France