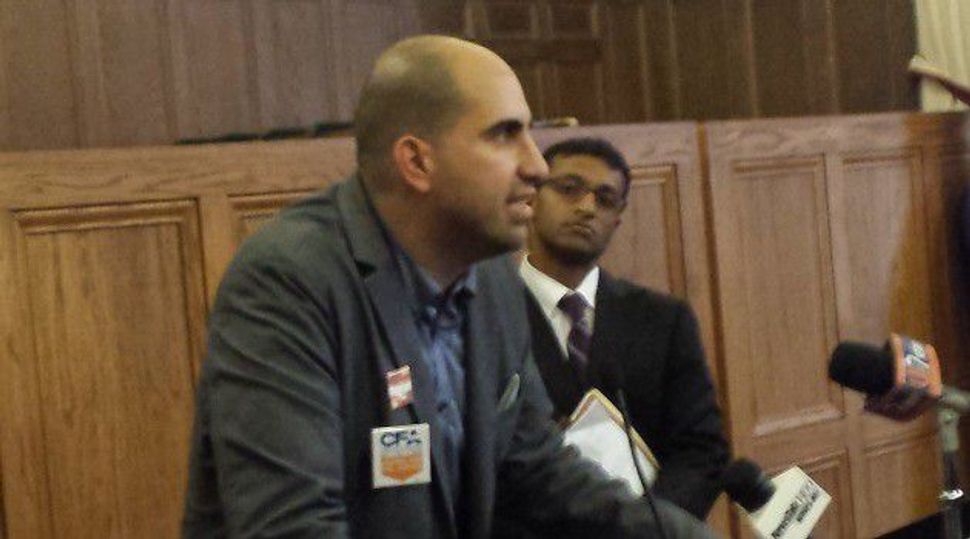 This editorial would be much easier to write if we thought that Steven G. Salaita is either a) a victim of pro-Israel pressure because a major public university abruptly revoked his appointment to a tenured position after he published offensive posts on Twitter; or b) a biased, intellectually lazy scholar whose vulgar tweets are only one reason why he doesn’t deserve a teaching job for life.

Those seem to be the choices for whoever has picked sides in this campus controversy, and many have. Thousands of people have signed a petition calling for Salaita’s reinstatement, and several prestigious scholars are now boycotting the University of Illinois at Urbana-Champaign, where Salaita was supposed to start teaching this semester. Meantime, intrepid journalists on the other end of the political spectrum have mined his books, blog posts, essays and reviews for more examples of what they consider hateful, unacceptable thinking.

The case has drawn national attention because it seems to confirm two popular narratives, either: a) higher education is in thrall to wealthy (read Jewish) donors who don’t brook dissent on Israel or b) higher education is in thrall to far left-wing academics who don’t brook dissent to their view that Western imperialism is still alive and well in the world. Curiously, both sides see this as an infringement of free speech and on the free flow of ideas, only different speech and very different ideas.

Neither of those extreme choices is intellectually satisfying to us. There isn’t a middle ground in this case so much as deeply problematic actions on both sides that ought to be seriously addressed.

We see Salaita’s case as an example of administrative bungling, a failure to account for the significant role that social media plays in academe, and a worrying willingness to view loathsome speech as acceptable discourse when it comes to Israel and the Jews.

The process by which university search committees recruit and select new faculty members is fraught with secrecy and anxiety — especially, as in Salaita’s case, when the appointment comes with tenure, the promise of lifetime employment that in this cruel economy is a precious (some say anachronistic) privilege.

So we don’t know what criteria were used and what judgments made when the department of American Indian studies evaluated Salaita’s work and offered him an appointment as associate professor at UIUC. But clearly the process appeared complete enough for Salaita to resign his tenured position at Virginia Tech, sell his house and move his family to his new campus two hours south of Chicago.

He was supposed to start work August 16. On August 1, UIUC chancellor Phyllis Wise informed Salaita that she would not recommend further action on his appointment to the board of trustees, effectively “un-hiring” him. She didn’t inform the campus until August 22.

Surely the chancellor and the board must have some say in granting professors a job for life, or why would their affirmation be a necessary part of the process? Are they merely a rubber stamp on faculty decisions? But surely, too, there are more reasonable ways to treat scholars than to render them jobless on such short notice, with a delayed and rather thin explanation to the university community, and the added disadvantage of leaving the small American Indian studies department scrambling to cover Salaita’s classes.

Some see ulterior, political motives here: Donors upset by incendiary anti-Israel tweets Salaita published in spring and summer applied pressure on the chancellor to take this last-minute decision — a dangerous example, such critics say, of the corporate university’s assault on tenure and academic freedom. We don’t know enough to confirm that assertion. What we see instead is a dysfunctional system in both the faculty and administration realm for what should be the university’s core mission: to hire the very best scholar-teachers and support their work.

In her statement, Wise said that the “decision regarding Prof. Salaita was not influenced in any way by his positions on the conflict in the Middle East nor his criticism of Israel.” But the way he expressed those positions is certainly at issue here. And it should be.

Twitter is a coarse medium, and a very public one, and many of Salaita’s posts about Israel and Zionism employ traditional anti-Semitic tropes and slanders so repeatedly that it’s impossible not to discern a deliberate pattern of thought. Salaita told our Nathan Guttman in an interview that Jewish students have nothing to fear in his classroom. Sorry, that’s just not believable.

“I’ve had a horrible influx of Zio-trolls today,” he tweeted April 25. “It’s like getting a case of the scabies. They burrow in and you want to rip off your skin.”

“There’s something profoundly sexual to the Zionist pleasure w/#Israel’s aggression,” he posted on July 9. “Sublimation through bloodletting, a common perversion.”

This expression goes far beyond disputing Israel’s treatment of the Palestinians, its military conduct in Gaza or even its right to exist, to trade in the kind of dangerous rhetoric that has characterized anti-Jewish sentiment for centuries. The attempts by his supporters to excuse this language would be laughable if they weren’t so dismaying. Just one example: Michael Rothberg, head of the English department at UIUC, released a letter that he wrote to Wise arguing that Salaita’s tweets were justified because of Israel’s destructive incursion into Gaza.

But the first one we cited was written in April. And the second one only a day after Israel launched Operation Protective Edge on July 8, when the violence had barely begun.

If a journalist working at a reputable news organization employed such language, he or she would be fired in a flash. Rules of conduct for social media have become a fundamental expectation in most workplaces. Not, evidently, in academia.

Salaita’s tweets are part of his public record, a reflection of his character no less important than his reportedly stellar student evaluations of his teaching at Virginia Tech. His speech ought not to be suppressed, but it certainly can be evaluated. Universities would do well to consider how behavior on social media reflects on the characters of their scholars, especially in tenure decisions. It’s not censorship to suggest that faculty avoid offensive statements that could make the classroom toxic to students and dishonor their roles as public intellectuals.

Salaita is suing to be reinstated. Should he lose, we don’t worry that legitimate criticism of Israel will be stifled at UIUC or any other college campus. Especially not after this summer. Should he win, we hope he stops using hateful language in place of constructive scholarship.