As Gaza Recedes in the Rear View Mirror 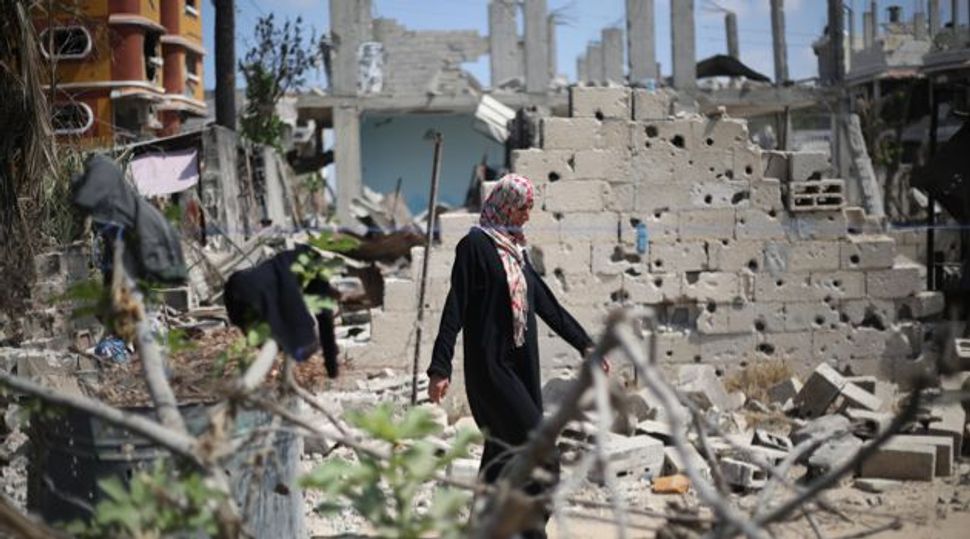 Broken: A Palestinian woman walks past a destroyed house in Khan Yunis in the southern Gaza Strip on September 11. Image by Getty Images

Americans have a habit of moving on once the guns stop firing. We did it in Afghanistan in the 1980s, tried to do it in Iraq in the 2000s — and now we’re doing it in Gaza. Yet as past experience has shown, now is the moment for more engagement, not less.

As Operation Protective Edge slouched toward its conclusion, innovative ideas came from surprising quarters. Shaul Mofaz, the centrist ex-general whose Kadima party is a shadow of its former self, proposed a “demilitarization for dollars” plan that was endorsed by Prime Minister Benjamin Netanyahu, President Shimon Peres and Labor leader Isaac Herzog. The plan would allocate $50 billion in international-community-donated aid dollars to rebuilding. It would strengthen the Palestinian Authority and put an international force on the ground to supervise demilitarization.

The plan has since foundered. Foreign Minister Avigdor Lieberman now says that Israel continues to support full demilitarization but is aware that that is unlikely to happen.

Let’s pause, though, to remark on the broad range of Israeli actors who supported placing an international force in Gaza — a position previously anathema, particularly to the Likud.

Let’s also consider the alternative, which is now gradually taking shape: another cease-fire, in which an empowered Hamas (“They stood up to Israel and survived!”) gradually rearms itself for the next conflict. Again the Palestinians would find themselves divided with a weakened P.A. that has de jure authority in Gaza but in which, as President Mahmoud Abbas recently bemoaned, Hamas actually calls all the shots.

In other words, more of the same, which will eventually lead to another conflict, and more lives lost.

At the moment, Egyptian-brokered talks are continuing, and the European Union’s ambassador to Israel, for one, is promoting a plan not unlike Mofaz’s: the “goal of disarmament,” rehabilitation of Gaza conducted by the P.A., and some kind of long-term agreement.

Yet no one is paying much attention. The same armchair warriors who tweeted every news flash during the war have now, apparently, lost interest. AIPAC, perhaps in damage control mode in response to a damning profile in The New Yorker, says nothing about what’s next for Gaza on its website, which is still festooned with propaganda about Hamas’s tunnels and human shields. J Street wants Obama to take a “firmer line on settlements.”

Certainly, without more interest on the part of Israel’s allies in the United States, the Obama administration is unlikely to take a leading role in negotiating a rehabilitation effort. Its hands are full with ISIS, and its foreign policy team is sick of Netanyahu..

This fog of disinterest naturally leads one to be pessimistic about the current round of talks, whose failure would be very bad for Israel, not to mention for the residents of Gaza. If nothing is done, the status quo will continue to drag along, with despair and disintegration increasing. Eventually, blood will be spilled.

Maybe no one’s interested in what’s next for Gaza because its rehabilitation has no real constituency. Doves want to talk about a permanent solution, not a partial rehabilitation or demilitarization plan. Hawks like Lieberman, meanwhile, say that the only solution is to be even more ruthless with Hamas, and to criticize the cease-fire for allowing the group to survive.

And it’s less thrilling to “stand with Israel” or “stand in solidarity with Palestine” when doing so means advocating for investment in a moderate alternative to Hamas — as opposed to forwarding propaganda during a war. It’s hard to be a zealot for wonky incrementalism.

So we — right-wingers, left-wingers, Zionists, anti-Zionists, moderates, friends, allies — have taken our eye off the ball. At precisely the moment of opportunity for something positive to happen, we’re moving on. Gaza isn’t.

As Gaza Recedes in the Rear View Mirror