Can We Talk About Climate Change? 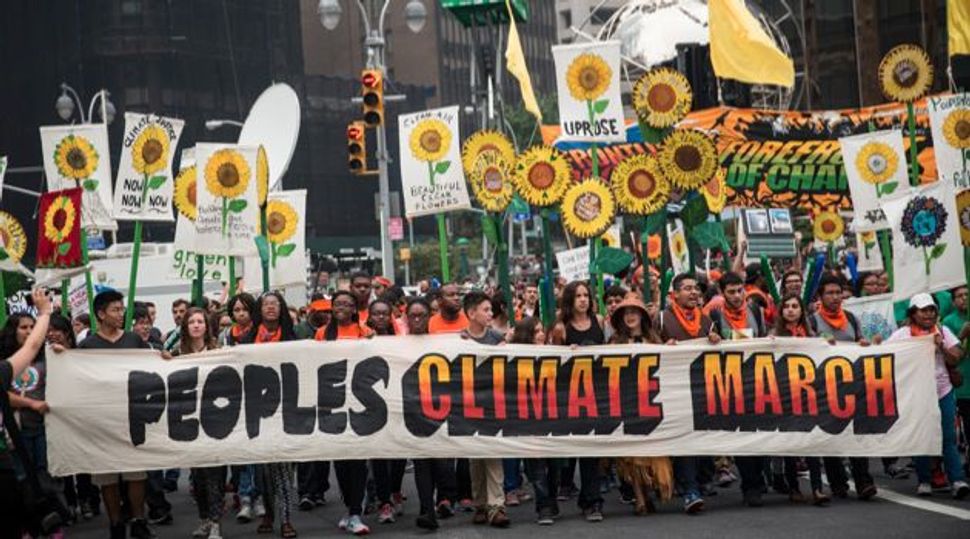 Preaching to the Choir: What about all the people who can’t hear the march’s message? Image by Getty Image

The organizers’ official count of participants in the People’s Climate March in New York City on September 21 was 400,000, but some thought it was even higher, so clogged were the Manhattan streets, so steady the flow of people, so joyful and determined the mood. It was a diverse crowd in some respects — age, race, religion, choice of attire — but not in a fundamental one. It’s likely everyone there believed wholeheartedly in the urgency of confronting human-made global warming and its dangerous and perhaps irreversible consequences to the health and well-being of the planet.

The marchers didn’t need to be convinced of the science or the seriousness of the issue at hand. Nor did the 1,000 organizations that signed on as sponsors need to agree on a plan of action; the march studiously avoided setting specific goals in favor of drawing together the broadest coalition possible.

Who couldn’t support this?

Well, a lot of Americans, it turns out.

Even though the march is now considered the largest-ever gathering on climate issues — with a turnout at least equal in size to the iconic 1963 March on Washington for civil rights — and even though an increasing number of Americans believe that global warming is an immediate concern, the environmental movement still struggles to broaden its political base and convince the unconvinced. What seems so obvious to some Americans remains unsettled and even highly disputed for others.

That same pattern exists in a less dramatic but still potent fashion among Jews. While more than 100 Jewish organizations signed on to the climate march, notably missing were groups representing the Orthodox and ultra-Orthodox.

“We were never contacted by the organizers about possibly co-sponsoring,” was how Nathan Diament explained the fact that the Orthodox Union, where he serves as executive director for public policy, didn’t sign on. That omission may have had more to do with the company the O.U. keeps than with a deliberate slight. Most of the sponsors came on board voluntarily.

“The political divide between Democrat and Republican, liberal and conservative, slices through the Jewish community the same way it slices through the rest of American society,” said Jessica Haller, an environmental activist who says she belongs to numerous Orthodox communities and finds an echo chamber in many of them. “We’re not unique.”

But the challenge of bridging this divide in our small community may hold the key to overcoming resistance in the broader public. The trick is, literally, to speak a different language.

Anthony Leiserowitz, director of the Yale Project on Climate Change Communication, and his colleagues have developed what they call “Global Warming’s Six Americas” — a nifty distillation of six prototype citizens based on attitudes and beliefs about climate change. The six range from the Alarmed, who believe that aggressive action is necessary to curb global warming, to the Dismissive, who generally think it’s all a hoax.

Al Gore on one end, Ted Cruz on the other. A lot of Americans — Leiserowitz calls them the Concerned, Cautious, Disengaged and Doubtful — in between.

He argues that the Six Americas differ in the weight they ascribe to egalitarian values (a more equal distribution of wealth and protections for vulnerable minorities and the poor) as opposed to individualistic values (freedom from government intervention in the lives of individuals and businesses). The Alarmed are the most egalitarian, the Dismissive the most individualistic.

We can see this play out by using the crude instrument of party identification. A New York Times poll published on September 23 found that 46% of all Americans said that global warming is an environmental problem causing a serious impact now. Among Democrats it was 61%; Republicans, 26%.

On the question of whether global warming is caused mostly by human activity such as burning fossil fuels, the gap was nearly the same.

Leiserowitz’s research goes beyond the simple blue/red divide to argue that each of his Six Americas represents audiences that respond to different framing and rhetoric on environmental issues. This is why, he wrote in an email, the conversation on climate change so often becomes derailed — it’s a conversation using the wrong words.

“In the end,” he wrote, “it’s about knowing your audience and framing the issue in terms that resonate with them, while connecting the dots between the issue and the things they care about. For example, ‘Save the polar bears’ only works with those people who care passionately about protecting other species — which isn’t most people.

“Yet, too many environmentalists over the years have used this or other such narrow rationales to motivate ‘the public’ to respond, and have been surprised when most people don’t respond the same way they did, or actually respond with hostility.”

So directing Jon Stewart language at the Fox News crowd will be about as effective as throwing ice cubes in the Artic to lower ocean temperatures.

Haller contends that the Jews who watch Fox News for its sympathetic coverage of Israel end up imbibing the station’s unconscionable skepticism on global warming. That may be an oversimplification, but she’s on to something verifiable: Our attitudes about climate change are influenced by our social settings. And the creeping polarization of the Jewish community — so evident on much hotter subjects, like Israel’s war with Hamas — also is expressed in this arena.

Which is why a pilot program initiated last summer by the Coalition on the Environment and Jewish Life, under the auspices of the Jewish Council for Public Affairs, is intriguing. The aim was to attract new audiences by framing the issue of climate change in national security terms, a framing that might resonate with Jews eager to support Israel by reducing American energy dependency on Arab oil states.

So former military officers took the stage in five cities strategically based in the swing states of Ohio, Pennsylvania, Missouri and Minnesota, sometimes addressing Jewish audiences, other times an interfaith crowd. Jared Feldman, the JCPA’s vice president, said the pilot was a success, though it’s not clear what that means.

Leiserowitz’s research actually shows that the national security argument doesn’t work for the Dismissives — they don’t believe it — and instead may backfire. Could we Jews be different? Perhaps. Perhaps there are more than Six Americas and on this issue, many Jews belong to a seventh one.

Satisfying though it may be to rant and rail against the climate change deniers, clearly other approaches are necessary if the momentum of the People’s Climate March is to lead to substantive change. It requires little imagination to show how the effects of global warming ooze through our economy, security and public health — unfortunately it’s all too obvious. Now we just have to help others see what we see.

Can We Talk About Climate Change?