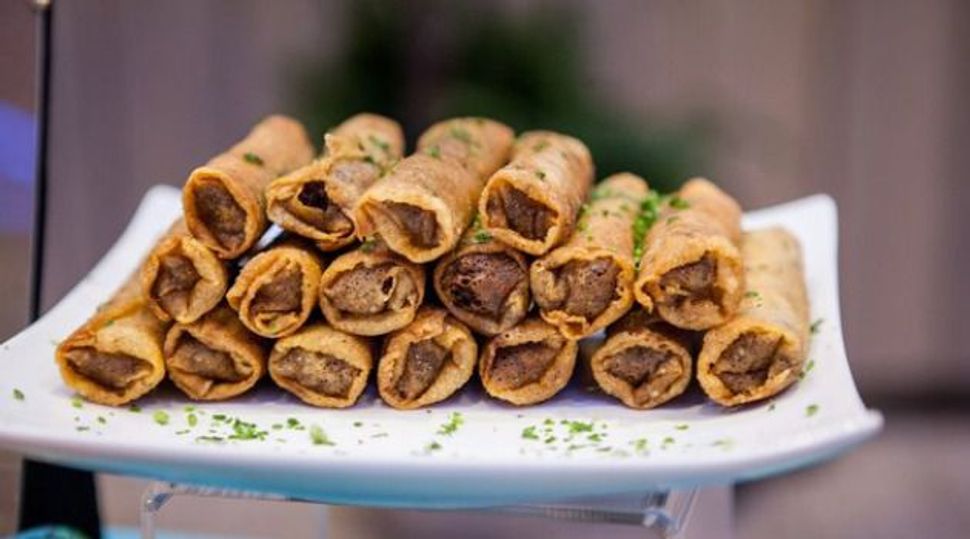 If your signature dish can be mistaken for cat food, you’ve got a problem.

Or that’s what Buzzfeed’s most recent experiment would have you believe. They got “random people” (aka non-Jews) to try classic Jewish foods for the first time and recorded their reactions. The response to gefilte fish? Gag. To kugel? Gag. To matzo ball soup? Yum! To chopped liver? “This is poop.”

One problem: what Buzzfeed considers to be traditional Jewish food is actually just Ashkenazi food. This is not surprising: America has long made the mistake of thinking “Jewish” is limited to Ashkenazi. From bagels to Woody Allen, Eastern European traditions reign.

And so, as two Sephardic Jews raised on a very full stomach, we humbly present these alternatives — they won’t make you gag. Promise.

This cooked Moroccan salad is really easy to make, if you have three hours to spare watching peppers and tomatoes simmer in oil. The end result is worth it. Trust.

This torpedo-shaped dumpling can be served as an appetizer in soup (Iraq), or fried into a croquette and filled with minced beef or lamb (Morocco). But don’t forget the spices. They transform what would be meat-stuffed falafel into a ball of minty goodness.

Those crepes you like to stuff with Nutella? Imagine them thinner, fried and smothered in honey. Take a minute to salivate. We get it. (These are usually eaten for Mimouna, the celebration marking the end of Passover, but we suggest a year-round consumption schedule.)

One could say these are Sephardi versions of cholent, but that’s not quite fair. North Africa’s dafina and hamim are a pleasure all their own. Just make sure to carve out major nap time afterward. These babies slow you down.

Most Sephardi Jews have a version of this dish, stuffed with rice, meat and spices. In North Africa, they’re known as poivrons farcis; in India, mahasha. If you’re not a fan of peppers, this can be reproduced with pretty much any hollowed-out vegetable — try onions or zucchini.

Before there were slow-cookers, there was tagine. A historically Berber dish from North Africa, it has become a mainstay of Sephardic cuisine. The ceramic clay pot from which the dish derives its name can be filled with yummies such as lamb, prunes, almonds, olives, carrots, chicken, mango, and basically anything else you can think of.

Traditionally served for Shabbat, this fish cooked in a spicy tomato sauce is the Sephardi retort to Ashkenazi gefilte fish. Despite its fancy appearance, it’s shockingly easy to make and perfect for those nights you want your guests to think you spent hours cooking for them.

And now for dessert. These honey-soaked petals of fried dough were brought to North Africa by Jews fleeing the Spanish Inquisition. Thanks, Spain!