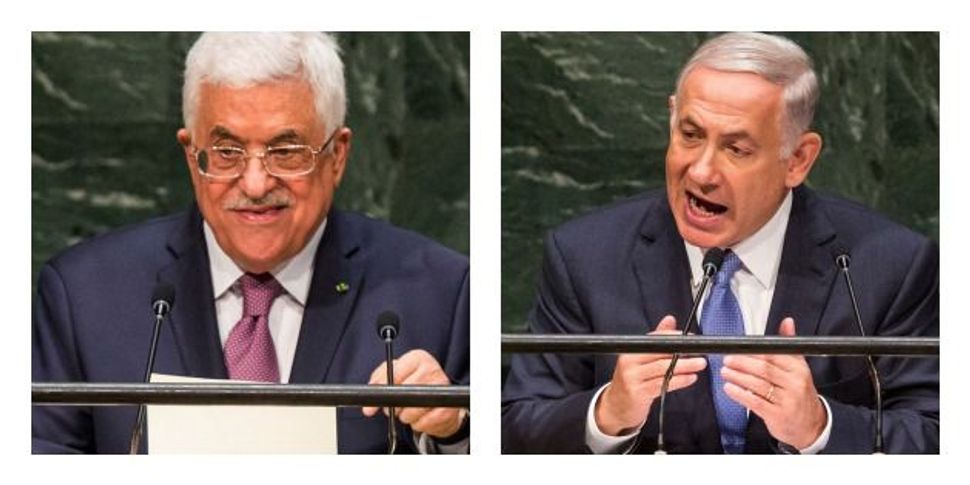 Well, that was helpful.

If you were the leader of your people and you really wanted to extend a hand to your enemy, you wouldn’t call him a racist. And genocidal. You probably wouldn’t want to say that this enemy assassinated thousands of children, devastated homes and schools and destroyed the dreams of a generation.

Yet, that’s what Palestinian President Mahmoud Abbas did in the first few minutes of his latest speech to the United Nations General Assembly on September 26.

And as predictably as the sun rises over the Temple Mount in Jerusalem, Abbas’ fiery language elicited an equally unhelpful response yesterday from Israeli Prime Minister Benjamin Netanyahu.

Netanyahu tied Abbas to Hamas, and then asserted that Hamas is virtually identical to the rampaging, beheading Islamic terrorists known as ISIS (or, if you are President Obama, ISIL).. That’s a fine way to cut short dialogue over the future of Hamas-ruled Gaza. Or, for that matter, any dialogue with Abbas himself.

And just to add to the public chill between these two men, Netanyahu denied that Israel is occupying any land and, in a neat rhetorical flourish, reminded his listeners that Abbas “wrote a dissertation of lies about the Holocaust.” (That was in 1982, but no matter.)

Now, to some degree these annual speeches resemble a candidate’s address at the end of a political party convention more than a try-out for a statesmanship award. They are meant to galvanize the respective bases — in the room and at home — present an extreme defense of the righteousness of the speaker’s cause, and offer some hint at what should come next.

Examine them as pieces of oratory side-by-side, however, and a few themes emerge: a surprising commonality of grievance, a widely extravagant abuse of facts, and the persistent sense that these two men, and by extension their political leadership, are simply talking past each other.

But both men used almost identical language to describe their grievances during Israel’s latest military conflict in Gaza.

Netanyahu: “Israel justly defended itself against both rocket attacks and terror tunnels.”

Well, the first part of each sentence is the same, anyhow.

Each accused the other of war crimes.

Abbas: “This last war against Gaza was a series of absolute war crimes carried out before the eyes and ears of the entire world…”

Netanyahu: “I say to President Abbas, these are the crimes, the war crimes, committed by your Hamas partners in the national unity government which you head and you are responsible for.”

There were some glaring omissions. In his long tirade against Israel’s actions in Gaza this summer, Abbas never once acknowledged the rocket attacks that have terrorized Israelis for years, or the tunnels from Gaza that represent an astonishing breach of security. This even though during the war itself, Abbas clearly distanced himself from Hamas’s numerous rejections of ceasefires and its deadly tactics aimed often at its own citizens.

For his part, Netanyahu flat out denied the 57-year-old occupation of the West Bank, as in: “The people of Israel are not occupiers in the land of Israel.”

But each man also pointed out some undeniable facts. Abbas is right to note that Jewish settlement construction has continued unabated, and that armed gangs of settlers have gone after Palestinians and their property. This behavior, both governmental and implicitly government-sanctioned, erodes Palestinian belief that a negotiated agreement is even possible.

Netanyahu was at his most persuasive when refuting Abbas’s reckless claim that the Gaza war was a genocide against the Palestinian people: “In what moral universe does genocide include warning the enemy civilian population to get out of harm’s way, or ensuring that they receive tons, tons of humanitarian aid each day even as thousands of rockets are being fired at us, or setting up a field hospital to aid their wounded?”

And in the end, what did they leave us with? Surprisingly similar wishes for “a just peace through a negotiated solution” (Abbas), but vastly different approaches. Abbas clearly hopes that the U.N., hardly hospitable to Israel, will push through a resolution that would somehow end the conflict, though he was mighty short on details, except to reiterate that a new state of Palestine would live side by side with Israel, but along the pre-1967 borders with East Jerusalem as its capital. Oh, and with a return of Palestinian refugees to what is now Israel. Not sure what else there is to discuss with these kinds of conditions, but Abbas said he still wants to talk.

Netanyahu, for his part, made a bolder pivot. Declaring that “the old template for peace must be updated,” he argued that the “new Middle East” requires a different order of resolution. While once it was thought that the end to the Israeli-Palestinian conflict would facilitate a broader rapprochement with the Arab world, he said that the reverse is now true.

“And therefore, to achieve that peace, we must look not only to Jerusalem and Ramallah but also to Cairo, to Amman, Abu Dhabi, Riyadh and elsewhere,” he said.

He may be deluding himself to believe that he can ignore the Palestinian conflict and still make nice to his neighbors. Or he may be onto something. This summer of heartbreaking death and destruction certainly demands fresh thinking. We would just have more trust in the outcome if these two leaders showed even a bit of trust in each other.