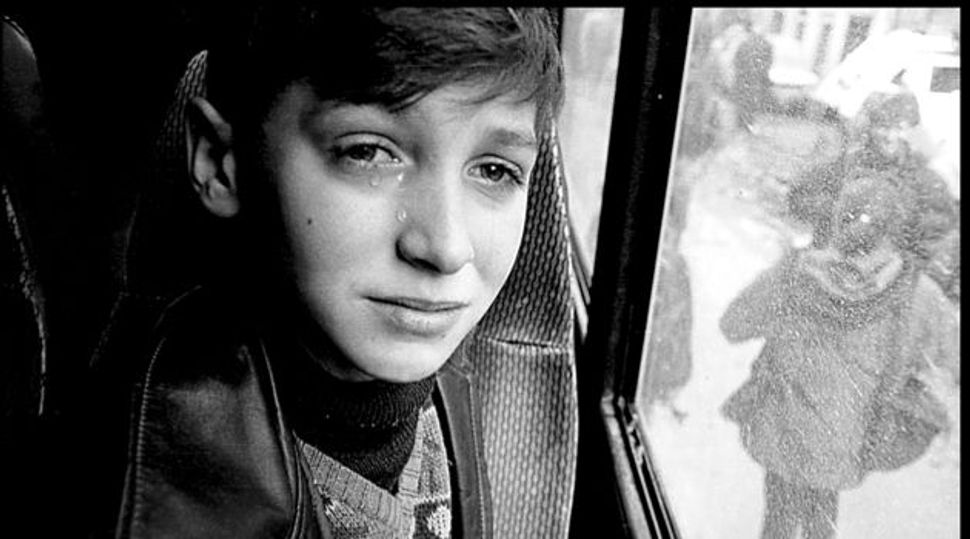 Escape: A young Muslim boy named Denis who was evacuated from besieged Sarajevo and now lives in Vienna and works with the Jewish community. Image by Edward Serotta

I went to the opening of the modest but powerful exhibit “Survival in Sarajevo” in Manhattan on October 7 hoping for a hint of optimism about Jews, Muslims, Christians and co-existence after such a brutal summer. It was there — in well-meaning speeches, poignant images and a genuinely inspiring story about Jewish goodness. But lurking beneath the surface were reminders of how it is nearly impossible to suppress the very worst in human behavior.

The photographs were shot by Edward Serotta, director of Centropa, an institute dedicated to preserving 20th-century Jewish life in Central and Eastern Europe, and set during the siege of Sarajevo from 1992 until 1995, the longest in modern history. They tell the story of La Benevolencija, the Jewish community’s humanitarian response, which turned a synagogue into a shelter, soup kitchen, free medical and dental clinic and post office for desperate residents of all faiths.

So desperate that, as Ljerka Danon was quoted in the exhibit, “If we only had a little more food, it would be like the Second World War.”

The story of Jews who helped others — both individually and with the crucial assistance of the American Jewish Joint Distribution Committee — is a welcome tonic as anti-Semitism again plagues pockets of Europe. The narrative of tribal hatred and violence in Ukraine and Syria and elsewhere in the Middle East can be countered.

But that narrative persists for good reason. Samantha Power, America’s ambassador to the United Nations, raised the connection to Syria in her remarks, amplified afterwards in an interview. The tactics used to strangle Sarajevo are “put to devastating use by the Assad regime,” she told me. Yet the United States and the West have been powerless to stop him.

Meantime, the war crimes trial of Radovan Karadzic, the former Bosnian Serb leader charged with genocide, only ended the same day the exhibit opened. “Justice cannot come soon enough,” Power said. Until it does, stories like the survival of Sarajevo may be all we have.