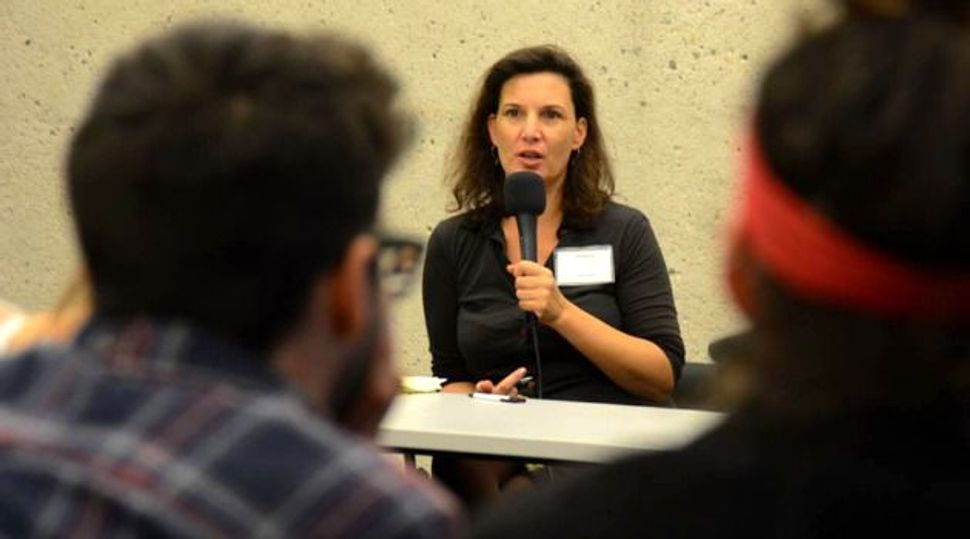 “I bought my ticket right after my rabbi’s Rosh Hashanah sermon. I knew I needed this community,” a student participant at the Open Hillel conference told me today.

The student went on to thank Open Hillel for providing a long overdue space for young Jews to come together and question the institutions, frameworks and viewpoints we have been taught. The message rang out loud and clear today at the inaugural Open Hillel conference: My generation is not content to be spoon-fed talking points, courted by free trips to Israel, or talked down to from patriarchal institutions that advocate policies at odds with our values. We want to proactively grapple with the hard questions that define the political and moral choices facing our community today.

Hillel International’s Standards of Partnership construct a political litmus test that prohibits the ability of students to engage with these questions. For Hillel, openness is an only-if-you-agree-with-our-funders kind of deal. The line is drawn at support for nonviolent resistance to occupation through boycott, divestment and sanctions — beyond that you become a “demonizer’” or “delegitimizer.” These are the rules of the conversation as dictated by Hillel, but the students are not content to stop there.

It was clear today, after hours of packed workshops, panels, speeches, and conversations in the hallways, at lunch and in the elevator, that the Open Hillel conference had struck a nerve. The floodgates have been opened and they aren’t shutting anytime soon. Over 350 people participated in this weekend’s conference — a far cry from the “small group of activists” Hillel International president Eric Fingerhut dismissed in his recent op-ed.

As in Jewish tradition, why can’t we embrace disagreement on Israel? Why this #OpenHillel14 attendee came. pic.twitter.com/UCvYTQDpd5

We asked ourselves some hard questions. Can, or should, we support the Law of Return and simultaneously deny the Palestinian Right to Return? Can we support the movement to boycott, divest from and sanction Israel as a tool to pressure policy change — without fear for the future of the Jewish people? How can we combat the Islamophobia and anti-Arab racism that pervades American Jewish conversations about Israel/Palestine? How do we talk about the Palestinian experience of the Nakba in our Jewish communities?

We interrogated the talking points each side trots out, but we didn’t stop there. It wasn’t enough to say “that’s demonizing” or “that’s anti-Semitic” or “that’s delegitimizing.” Instead we sought to understand and contextualize the experiences behind the political opinions we heard. We kept asking questions, seeking to hold onto tensions, discomforts and points of growth.

Speaking at the opening plenary on Saturday night, renowned scholar Judith Butler summed up a central question in the minds of all the attendees I met at the conference. “You are here to ask the question: Can I affirm my Jewish values and express criticism of Israel?” The space that Open Hillel created this weekend was a place where people could be their full political selves and engage this question head-on.

Dorothy Zellner, an activist with Jewish Voice for Peace and Jews Say No! on New York’s Upper West Side, spoke on a plenary Monday afternoon about how the experience of being SNCC organizer during Freedom Summer relates to her activism for Palestinian rights. Warning students that speaking out against oppressive Israeli policies will incur real pushback, her voice choked up, and she said: “You need to have a long-term vision: What you are doing by speaking out is a mitzvah that will live on long after you do.”

This is why I am here.

The security of a Jewish future will depend, not on the might of the Israeli military, but on the empowerment of young Jews to grapple with and act on urgent questions of social justice. We are here, we care, and we want to have these conversations without boundaries and red lines.

Jewish communities keep asking themselves over and over again, “How do we engage young Jews?” Well, here is your answer: Drop the policies that alienate students and attempt to police thought and opinion. Be accountable to student voices, not just donors’ political agendas. Empower student leaders and decision-makers, don’t infantilize them.

Let Hillel truly be the student-oriented group it claims to be. Let us speak.

Another why are you here? what do you hope to gain? card from an #OpenHillel14 attendee pic.twitter.com/PUudm7GlAA