At ‘Simchat Torah Across Brooklyn,’ No Politics, Just Joy 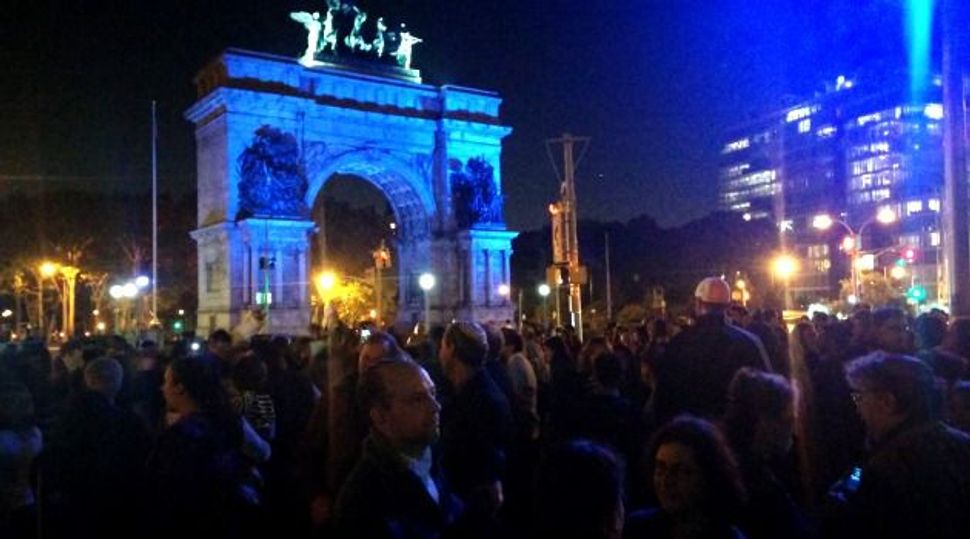 In the Grand Army Plaza, at the entrance to Prospect Park in Brooklyn, the circle dance threatened to close me in. I had avoided it for some time, but the energy was contagious. I gave in and danced in one of the joyful concentric circles.

This was the third year of “Simchat Torah Across Brooklyn,” an outdoor celebration spearheaded by Rabbi Andy Bachman and Cantor Joshua Breitzer of Congregation Beth Elohim in Park Slope, Brooklyn. Over 500 people from over twenty Jewish organizations and synagogues (from the Park Slope Jewish Center to Repair the World: NYC) stopped by over the course of the night to sing, dance and meet friends. Jews of all denominations and ages were present, but the majority of people in the crowd were younger than 40. It was safe to call it a party.

A few dancers lugged Torah scrolls around with them as they circled. Cantor Breitzer wore a headlight on his forehead and never left the center circle.

“As you can see,” Bachman said, “it’s impossible to hold him down.”

After the contentious politics of this summer, it was heartening to see a true public celebration in action, with no protests, no political undertones and no pretenses. The interdenominational vibe was heartening as well. Even groups of Hasidic men wandered among the outskirts of the circles from time to time.

“Cantor Breitzer and I are deeply committed pluralists,” Bachman said.

Bachman explained that the goal is to bring all of the synagogues and Jewish communities of “brownstone Brooklyn” together.

“The tradition for years was that we only got together on Yom HaShoah,” Bachman said. “So we said to ourselves a few years ago, ‘Why just Holocaust remembrance day?’”

Good question — the Simchat Torah celebration is clearly a huge success and continues to grow in size each year. When asked whether they thought the crowd was bigger this year, several people gave a similar answer: It’s hard to tell with so many people dancing.

At ‘Simchat Torah Across Brooklyn,’ No Politics, Just Joy