Can Hamas War Be Tied to ISIS? Not If You’re Kerry 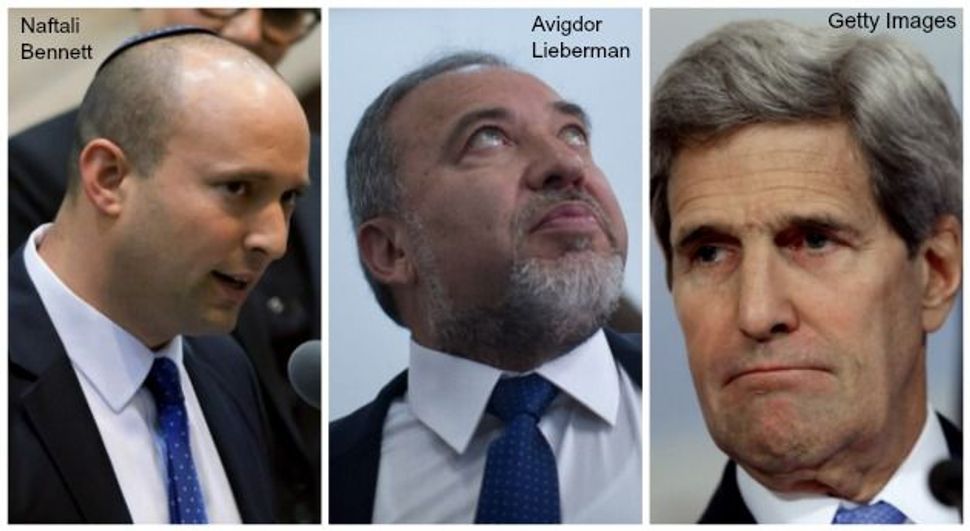 One of these things is just like the other: A strange new flareup in U.S.-Israeli relations erupted on Friday, after a speech by Secretary of State John Kerry drew furious objections from pair of ranking Israeli cabinet ministers.

Kerry was discussing the ISIS threat before a Muslim audience in Washington. He spoke of the need to address a string of Middle East problems that he said frustrated and angered Arab youth and thus helped ISIS’s “recruitment.” One item on his list was the Israeli-Palestinian conflict.

The Israeli ministers charged that Kerry was blaming Israel for the rise of ISIS. One, economics minister Naftali Bennett of the settler-backed Jewish Home party, stopped just short of charging Kerry with anti-Semitism. “It turns out that even when a British Muslim decapitates a British Christian, there will always be someone to blame the Jew,” Bennett said.

The other, information minister Gilad Erdan, a rising Likud star and a member of the elite Security Cabinet, piped in later, declaring that Kerry was “breaking records” in misunderstanding the region. Both claimed Kerry’s words would encourage terrorism.

Their remarks prompted an angry retort that afternoon from State Department spokeswoman Marie Harf. She said the Israeli critics — “especially one particular minister,” apparently Bennett — had “trie[d] to distort” Kerry’s words “for their political purposes.”

In a sign of how seriously Jerusalem took the American anger, Prime Minister Netanyahu’s two top lieutenants, foreign minister Avigdor Lieberman and defense minister Moshe Yaalon, jumped in on Saturday with strong rebukes of Bennett for undermining Israel’s relations with its closest ally.

Here’s the strange part: Kerry’s comment on Israel echoed — closely, though in milder tone — a fire-breathing speech by Netanyahu himself before the United Nations just two and a half weeks earlier. Netanyahu had said that Israel’s conflict with Hamas is part and parcel of the larger struggle against ISIS. “Hamas is ISIS and ISIS is Hamas,” he said. He went on to elaborate:

Ladies and gentlemen, the fight against militant Islam is indivisible. When militant Islam succeeds anywhere, it’s emboldened everywhere. When it suffers a blow in one place, it’s set back in every place. That’s why Israel’s fight against Hamas is not just our fight, it’s your fight. Israel is fighting a fanaticism today that your countries may be forced to fight tomorrow.

In other words, Hamas and ISIS might be fighting on different fronts, but they pursue the same goals, feed off each other and presumably draw from the same pool of potential extremist recruits. If Israel’s prime minister expects opponents of ISIS to see the two fronts as parts of a single war against radical Islam, why wouldn’t disgruntled Arab teens, outraged by televised images of Israeli airstrikes on Gaza, draw the same conclusion? For that matter, why wouldn’t an American secretary of state assume that Israelis see the connection? After all, they brought it up.

Bennett and Erdan were responding to Kerry’s remarks at a State Department reception Thursday marking Eid al-Adha, the Muslim festival of the sacrifice. Kerry had offered a list of problems in the Middle East that angered Arab youth and spurred “recruitment” to ISIS — and that needed greater efforts to correct. He named joblessness, economic stagnation, the Syrian civil war and intra-Islamic religious disputes. He added that Middle Eastern leaders he’s spoken to unanimously put the Israeli-Palestinian dispute on the list, and that peace on that front could help ease street anger and slow recruitment.

The first Israeli news report on Kerry’s remarks seems to have appeared Thursday in a highly distorted version on settler-run Arutz Sheva-Israel National News. The report didn’t mention any of the other regional problems besides the Israeli-Palestinian conflict that Kerry had cited as spurring ISIS recruitment. In fact, it implied that there were no others. It’s entirely possible, therefore, that Bennett didn’t know he was taking Kerry’s words out of context and distorting their meaning.

On the other hand, after Lieberman attacked him on Saturday for damaging U.S.-Israel relations in a quest for votes, Bennett stood his ground and even doubled down:

The United States is our great friend and we support this relationship. But I stand behind my remarks. After Kerry said outright that the Israeli-Palestinian conflict feeds and strengthens Islamic State, there was an obligation to respond quickly so the comparison would never be repeated. Terror mustn’t be shown any understanding, nor should it ever be backed. It should be fought.

The emergence of Lieberman and Yaalon as Kerry’s defenders says a lot about the current state of U.S-Israel ties. Lieberman was regarded as foreign minister in name only for much of his first term in the post, beginning in 2009, treated as a virtual pariah in major capitals because of his reputation for racism, extremism and tactlessness. That he is now a voice of moderation is partly due to his own efforts to reinvent himself and partly a reflection of how Israel’s own reputation has declined.

As for Yaalon, it was just last January that he himself was thoroughly roasted across the Israeli political landscape after being quoted calling Kerry “obsessive” and “messianic” in his efforts to broker peace. Kerry was said to be deeply angered by Yaalon’s remarks. The current Bennett crisis erupted as Yaalon was preparing to leave Saturday night for a series of meetings in Washington, and it’s possible that his sharp rebuke of Bennett was prompted at least partly by anxiety that the latest crisis would revive memories of his own imbroglio.

Here’s the portion of Kerry’s remarks touching on the Israeli-Palestinian conflict. “Eid” refers to Eid al-Adha, the Muslim holiday celebrating Abraham’s would-be sacrifice of his son (the biblical story of the binding of Isaac, though in the Quran’s version it was Isaac’s brother Ishmael on the altar). “Daesh” is the Arabic acronym for ISIS: a-Dawlat al-Islamiya fi al-Iraq wa-a-Sham (the Islamic State in Iraq and al-Sham or greater Syria):

…this is a difficult time. It’s a very complex time, and there are many currents that are loose out there that have brought us to this moment. The extremism that we see, the radical exploitation of religion which is translated into violence, has no basis in any of the real religions. There’s nothing Islamic about what ISIL/Daesh stands for or is doing to people.

And so we all have a larger mission here. And obviously, history is filled with that. I mean, you go back to the Thirty Years’ War in Europe and other periods of time, Protestants, Catholics, others who have fought. It’s not new to us. Tragically, it’s more prominent because media is more available today, the messaging is there, everybody is more aware on an instantaneous basis of what is happening. And of course it’s exploited by people who engage in this.

So — but it’s still complicated, and for other reasons. We’re living at a point in time where there are just more young people demanding what they see the rest of the world having than at any time in modern history. And when you have 65 percent of a country, as you do in many countries in the Middle East or South Central Asia or elsewhere, in north Horn of Africa, that are under the age of 35 — 65 percent — and 60 percent under the age of 30, and 50 percent under the age of 25, you are going to have a governance problem unless your governance is really addressing the demands and needs of that part of the population. And I don’t care who you are or what kind of government you have, nobody is impregnable with respect to those demands and those needs, and they have to be responded to at some point in time.

Don’t forget that what is happening now in Syria started with young people going out and demonstrating for jobs and for opportunity and for dignity and respect. And when they were met by clubs and repression, their parents went out to defend them. They joined in and said, “No, don’t do this to our kids. We want this.” And then they were met with bullets. And that’s what has brought this incredible, chaotic moment where we now have 10 million people or so displaced — a million and a half in Lebanon, million and a half in Turkey, a million and a half-plus or more in Jordan — and internally, huge population displaced. And Eid actually speaks to that, because this is a moment of charity. This is a moment when Ibrahim is celebrated for not slaying — for being willing to slay his son in order to provide for people and to prove something.

And so we have to stop and think about that in the context of this challenge that we face today. I think that it is more critical than ever that we be fighting for peace, and I think it is more necessary than ever. As I went around and met with people in the course of our discussions about the ISIL coalition, the truth is we — there wasn’t a leader I met with in the region who didn’t raise with me spontaneously the need to try to get peace between Israel and the Palestinians, because it was a cause of recruitment and of street anger and agitation that they felt — and I see a lot of heads nodding — they had to respond to. And people need to understand the connection of that. And it has something to do with humiliation and denial and absence of dignity, and Eid celebrates the opposite of all of that.

So what we need to do is recognize that we need to build peace through specific partnerships. One partnership is specifically the effort to try to drive towards this peace, to have a compromise, to find a way to create two states that can live together side by side, two peoples, with both of their aspirations being respected. I still believe that’s possible, and I still believe we need to work towards it. We also need to figure out how — and I think what’s happening in Iraq is an interesting beginning of that, where Daesh has kind of drawn a line and made people stop and think, and Sunni and Shia are beginning to realize there’s a common problem out there and there is a way to try to work together. And the new government gives a breath of fresh air to that possibility that that could happen.

Can Hamas War Be Tied to ISIS? Not If You’re Kerry