Why AIPAC Is Anti-Israel 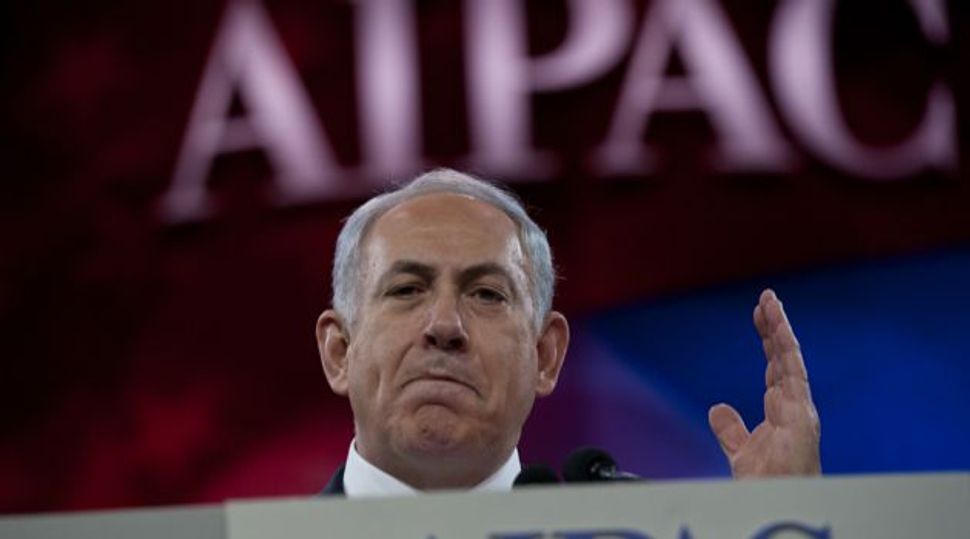 Enablers? AIPAC has given unqualified support to Israel’s most nationalistic tendencies. Image by Getty Images

American Jews who support Israel have been fighting one another in an asymmetrical way: Hawks routinely accuse doves of being anti-Israel, but doves do not accuse the hawks.

I’m not sure how this pattern has come about — maybe it just feels ironic for pro-peace people to pick a fight — but it needs to end. It is a one-sided delegitimization that confuses the terms of debate and puts one side on the permanent defensive.

It is also factually wrong, both as to the motivations of the peace camp, and to the facts of the State of Israel. It’s not as if hawks love Israel the most, doves love it the least, and centrists are somewhere in the middle. On the contrary, it’s because doves care about Israel that they are concerned that the hawks are endangering it.

Those of us who believe that a two-state solution is necessary for Israel’s survival need to stop giving our anti-two-state friends a pass. It may seem ludicrous to accuse AIPAC of being anti-Israel, but that is exactly what I am recommending. And what I’m going to do.

To be sure, I am quite sure that the Americans who support, say, Elad, the right wing organization currently ethnically cleansing East Jerusalem, are ardently pro-Israel in their hearts and minds. They are Zionists and Jewish patriots. I’ll even include in this crowd the biggest financial supporters of the Israeli Right, the Christian Zionists, who want Jews to be in Israel so that the Rapture can come and annihilate us. Even they, I will concede, are doing what they think is best for Israel.

But the same is true for J Street, ACRI, and the New Israel Fund. I know the leaders of these organizations, and I know that they believe that their work is in Israel’s best interests, no less than the hawks. (This is not true, by the way, of non-Zionist or anti-Zionist organizations such as Jewish Voice for Peace; such groups may be pro-Jewish, but avowedly not pro-Israel.)

This subjective sense, however, doesn’t matter to their critics, who routinely lambast them as anti-Israel, anti-Semitic, self-hating, whatever. It sure didn’t matter to the “Presidents’ Conference,” the self-appointed, self-selecting, and self-serving cadre of Jewish right-wingers who define the parameters of the Institutional Jewish Community, and who excluded J Street earlier this year.

So, if Jeremy Ben Ami’s love of Israel doesn’t count, neither does Howard Kohr’s. Or Alan Dershowitz’s, or Lynn Schusterman’s. All of these people are sincere, yet only Ben Ami’s critics call him anti-Israel.

Enough. Enough of faux, one-sided civility. Either everyone’s pro-Israel views are respected as such, or no one’s should be. It’s time for the Left to level the playing field, and defend our pro-Israel views the way that the Right defends its.

Finally, after years of not-quite-saying-it, Prime Minister Netanyahu has admitted that he will not accept a Palestinian state in the West Bank. What is the alternative? Continued occupation, possible annexation of Judea and Samaria (presumably, with some form of apartheid-like exclusion of Palestinians), and, according to Ariel Sharon’s theory, the gradual wearing down of the Palestinian population until they will accept a deal on Israel’s terms.

There is a formal logic to this view, but it is still quite insane. The State of Israel was a creation of the United Nations, and the state of Palestine will be too if this policy is pursued. The Western World will not sit idly by for decades and allow five million people to be stateless. Yes, there are graver injustices elsewhere. But Israel is not China; it is a tiny client state of the West that still depends on American aid to survive.

The “wait and occupy” view is also morally bankrupt, of course, but I’ll leave that aside for now.

Purely in terms of realpolitik, it is naïve in the extreme to believe that Israel’s occupation can really go on for a century. As I’ve written in these pages before, it seems plausible in the bubble of greater Jerusalem, where facts on the ground are present and the world’s disapproval is not. But that bubble is just a big pile of sand in which Israeli conservatives have placed their heads. Out here in the real world, the Right’s bravado looks foolish, like the bluster of South Africa’s National Party in 1983.

The Israeli Right, in other words, is being naïve. And that naivete, however born of sincere intentions, is a politics blinded by nationalism. The Right is loving Israel to death, its jingoism and patriotism eclipsing rational thinking. It is deeply destructive to the sustainability of Israel.

This is not just some columnist’s opinion. Again and again, Israel’s leading strategic minds have spoken out against the Right’s arrogant nationalism. (My colleague J.J. Goldberg has led the field in reporting this constant stream of criticism.) These include Yuval Diskin, director of the Shin Bet from 2005-2011. From Meir Dagan, former head of the Mossad. nd, of course, the six former Shin Bet heads (Diskin included) who appeared in the stunning film The Gatekeepers.

To be sure, right-wing writers with no security experience, but plenty of nationalistic love, have criticized these Israeli heroes to the point of calling them traitors. But vehemence is not intelligence. Indeed, it is often the opposite.

Nor should there be any delusion about where AIPAC, ostensibly Israel’s greatest friend, stands in this matter. Connie Bruck’s massive, 12,000 word expose on the organization, published last month by The New Yorker, should be a watershed for the American Jewish community. While largely about AIPAC’s gradual decline, Bruck’s article is also an in-depth investigation of the organization’s history, filled with interviews, behind-the-scenes notes and documents that show that AIPAC has opposed a two-state solution from its inception.

“We’ll work against it until it happens,” is how Tom Dine, AIPAC’s former executive director, characterizes the group’s position. AIPAC’s actions, more than its empty words supporting the peace process, prove the veracity of Dine’s assessment.

I have several (self-described) moderate friends in leadership positions in the Jewish community. They support AIPAC and support a two-state solution. To them, I say: Bruck’s article is a must-read. It changes everything.

Of course, right-wing Americans don’t just fund AIPAC. They also massively fund groups like Elad, which Haaretz reported has a larger budget than Association for Civil Rights in Israel, Ir Amim, B’Tselem, Breaking the Silence, Yesh Din and Physicians for Human Rights combined. At least $6 million per year is funneled to Elad by the American organization Friends of Ir David.

If a two state solution is indeed an Israeli necessity, activities of groups like Elad are more dangerous to the State of Israel than those of Jewish Voice for Peace. They threaten the legitimacy of the Israeli democracy in the court of world opinion. They imperil the only realisitc hope for co-existence. They empower extremists. This, while it is pro-settler, pro-Zionist, and pro-Jewish-Jerusalem, Elad’s activities are anti-Israel.

The catchphrase on Capitol Hill is “friend of Israel.” Even if AIPAC’s clout has diminished, everyone still wants to be a friend of Israel, and lauded as such.

But friends don’t let friends do whatever they want. Friends keep friends honest, and hold them to their ideals. When someone is being self-destructive — with intoxicants like alcohol or intoxicants like nationalistic zeal — a good friend will tell them so.

Why AIPAC Is Anti-Israel